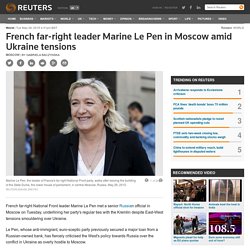 Vladimir Putin leaves G20 early after criticism from world leaders over Ukraine - World Politics. Officially, Mr Putin said he has to leave early because of a long flight back to Russia where he has important business. 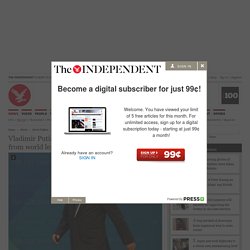 However, most believed that he has skipped Brisbane early - and before the leaders' lunch, which is not considered good form - because he has had enough of the constant criticism. Although the G20 is supposed to focus on the global economy, given that the members account for nearly 86 per cent of global wealth, the event has been overshadowed by hostility towards Mr Putin. Why Is Russia Simulating Nuclear Strikes on Sweden? Russian fighter jet SU-27 closing up on a Swedish signals intelligence plane. 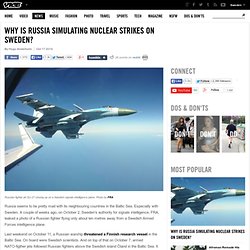 Photo by FRA Russia seems to be pretty mad with its neighbouring countries in the Baltic Sea. Especially with Sweden. A couple of weeks ago, on October 2, Sweden's authority for signals intelligence, FRA, leaked a photo of a Russian fighter flying only about ten metres away from a Swedish Armed Forces intelligence plane. A Boy and His Toys. I think the critics have it all wrong: The big reset button that Hilary Clinton handed to Sergei Lavrov in 2008 worked perfectly -- it's just that some joker set it to 1968. 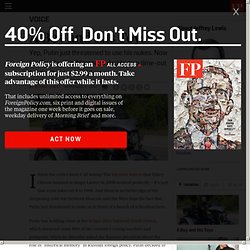 And there is no better sign of the deepening cold war between Moscow and the West than the fact that Putin just threatened to nuke us in front of a bunch of schoolteachers. Putin was holding court at the Seliger 2014 National Youth Forum, which attracted some 800 of the country's young teachers and postgrads, when an attendee asked the Russian president about the role of "historical memory" in Russian foreign policy.

Putin decided to point out that Russia's enemies should be careful, and then he got to the good part: "Let me remind you that Russia is one of the world's biggest nuclear powers. These are not just words -- this is the reality. What's more, we are strengthening our nuclear deterrent capability and developing our armed forces. " Hey, the more you know, right? ALEXANDER ZEMLIANICHENKO/AFP/Getty Images. Ukraine crisis: EU 'must act on Russia aggression' 30 August 2014Last updated at 10:12 ET European Commission President Jose Manuel Barroso: "We may see a situation where we reach the point of no return" EU leaders are gathering in Brussels to discuss the crisis in Ukraine, threatening to impose fresh sanctions against Russia. 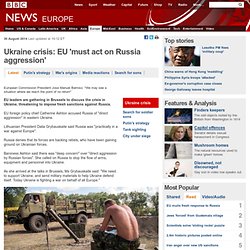 EU foreign policy chief Catherine Ashton accused Russia of "direct aggression" in eastern Ukraine. Lithuanian President Dalia Grybauskaite said Russia was "practically in a war against Europe". Russia denies that its forces are backing rebels, who have been gaining ground on Ukrainian forces. Baroness Ashton said there was "deep concern" over "direct aggression by Russian forces". As she arrived at the talks in Brussels, Ms Grybauskaite said: "We need to support Ukraine, and send military materials to help Ukraine defend itself. Ukraine : les séparatistes demandent à Poutine d'intervenir, après la fusillade à Sloviansk. BrunoTertrais : From an old (1992)... Crimea Tatars say leader banned by Russia from returning. Russia gets cosy again in cold war port. The Russians, it seems, are once again getting themselves nice and cosy in Vietnam's Cam Ranh Bay - the prized South China Sea port - as naval relations between the two countries deepen. 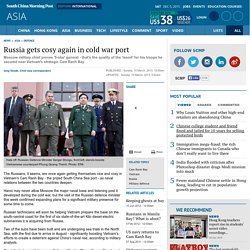 Hanoi may never allow Moscow the major naval base and listening post it developed during the cold war, but the visit of the Russian defence minister this week confirmed expanding plans for a significant military presence for some time to come. No Civil War in Syria - Russian Minister. Russia hits back at US with its own blacklist - Americas - Al Jazeera English - Pale Moon. Russia has published a blacklist of US officials banned from entering the country in retaliation to a Washington sanction against 18 Russians and Chechens accused of committing human rights abuses. 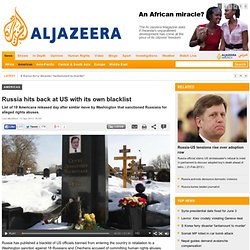 "The war of lists is not our choice, but we cannot ignore outright blackmail," the Russian foreign ministry said on Saturday in a statement, which included a list of 18 US officials "implicated in human rights violations". The list released by the US Treasury on Friday names 16 Russians allegedly linked to the death of jailed lawyer Sergei Magnitsky, as well as two Chechens tied to other alleged rights abuses, all of whom are now barred from travelling to the US or holding assets there under the 2012 Sergei Magnitsky Act. The measure has infuriated Moscow, which had warned that it would retaliate with a similar measure. 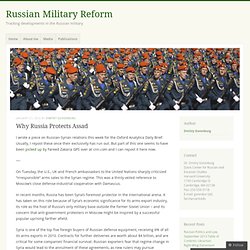 Usually, I repost these once their exclusivity has run out. But part of this one seems to have been picked up by Fareed Zakaria GPS over at cnn.com and I can repost it here now. On Tuesday, the U.S., UK and French ambassadors to the United Nations sharply criticized “irresponsible” arms sales to the Syrian regime. This was a thinly veiled reference to Moscow’s close defense-industrial cooperation with Damascus. Hizbullah visits the Duma. President of Russia. Dmitry Medvedev sent messages to the heads of state of the Russia-NATO Council (NRC) members outlining the Russian Federation's position on antiballistic missile defence (ABM). 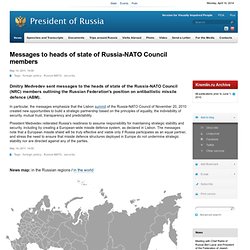 In particular, the messages emphasize that the Lisbon summit of the Russia-NATO Council of November 20, 2010 created new opportunities to build a strategic partnership based on the principles of equality, the indivisibility of security, mutual trust, transparency and predictability. President Medvedev reiterated Russia's readiness to assume responsibility for maintaining strategic stability and security, including by creating a European-wide missile defence system, as declared in Lisbon.

The messages note that a European missile shield will be truly effective and viable only if Russia participates as an equal partner, and stress the need to ensure that missile defence structures deployed in Europe do not undermine strategic stability nor are directed against any of the parties. 2007-06-26 - ADDRESSING RUSSIAN ARMS SALES.