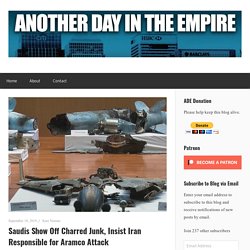 Not to worry, Marco—the Saudis are on it. No, wait. Ho, Ho, Ho! Send Me $100 Billion By Christmas Or I Will Detonate A Dirty Bomb In 5 Major Cities! Season’s greetings from your old friend Santa! 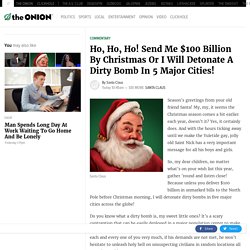 My, my, it seems the Christmas season comes a bit earlier each year, doesn’t it? Yes, it certainly does. And with the hours ticking away until we make the Yuletide gay, jolly old Saint Nick has a very important message for all his boys and girls. Charlottesville Suspect Might Have Received Tacit Support From High-Level Government Figure. WASHINGTON—Suggesting he did not act alone but with implicit backing at the highest levels, the FBI said Monday that the suspect charged with murder for ramming his car into a crowd of protesters in Charlottesville over the weekend may have received tacit support from a powerful U.S. government figure. 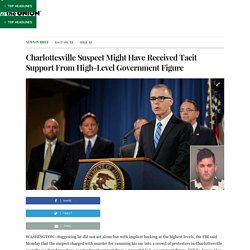 “While James Alex Fields Jr. was the man behind the wheel, we have every reason to believe that he benefited from the quiet patronage of someone of great importance in the American executive branch,” said FBI director Christopher Wray, adding that the agency has for months suspected that white nationalists had an influential de facto ally in that arm of government and that recent events have only validated their theory. “Rather than openly declare common cause with U.S. neo-Nazi terrorist acts, we believe this official prefers to discreetly provide assistance from a removed position where he can operate with at least a modicum of plausible deniability.” Cookies are Not Accepted - New York Times. Terror on Trial 1: (In)visibilities. Please Subscribe to 3QD If you would like to make a one time donation in any amount, please do so by clicking the "Pay Now" button below. 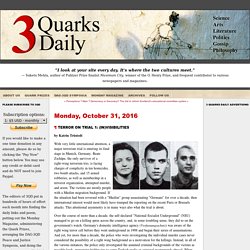 You may use any credit or debit card and do NOT need to join Paypal. The editors of 3QD put in hundreds of hours of effort each month into finding the daily links and poem, putting out the Monday Magazine, administering the Quark Prizes, arranging the DAG-3QD Peace and Justice Symposia, and doing the massive amount of behind-the-scenes work which goes into running the site. If you value what we do, please help us to pay our editors very modest salaries for their time and cover our other costs by subscribing above.

More Questions Arise About San Bernardino Shooters After Immigration File Released. Now the truth emerges: Here’s how the US fueled the rise of ISIS in Syria and Iraq. Syrian Passports Found at Paris Attacks Scene Confirmed Fake. Mary AtkinsonNovember 16, 2015 (MiddleEastEye) Syrian passports found near the bodies of two of the suspected Paris attackers were fakes that were likely made in Turkey, police sources in France told Channel 4 News on Sunday. 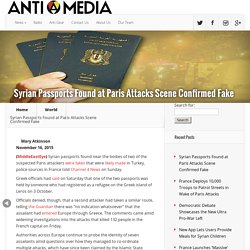 Anonymous Declares War On ISIS After Paris Attacks. Let’s Not Get It Wrong This Time: The Terrorists Won After 9/11 Because We Chose to Invade Iraq, Shred Our Constitution. What is terrorism? 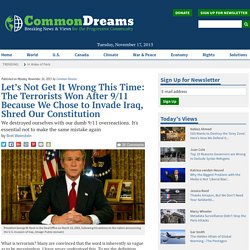 Many are convinced that the word is inherently so vague as to be meaningless. I have never understood this. To me the definition seems singular, and obvious, and it would appear that simply understanding it is the key to avoiding terrible missteps in the aftermath of an attack like the one in Paris. Terrorism is a tactic in which the primary objective is to produce fear, rather than direct harm. Irrational Hate the Best Way to Fight Terrorism [Satire] Following the terrorist attacks in France, President Hollande has declared a merciless war against ISIS. 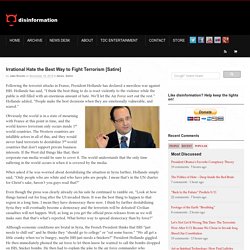 Captagon: the amphetamine fuelling Syria's civil war. As Syria sinks ever deeper into civil war, evidence is starting to emerge that a brutal and bloody conflict that has left more than 100,000 people dead and displaced as many as two million is now also being fuelled by both the export and consumption of rapidly increasing quantities of illegal drugs. 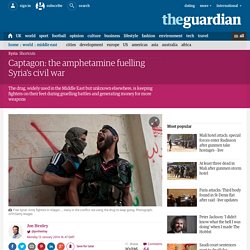 Separate investigations by the news agency Reuters and Time magazine have found that the growing trade in Syrian-made Captagon – an amphetamine widely consumed in the Middle East but almost unknown elsewhere – generated revenues of millions of dollars inside the country last year, some of which was almost certainly used to fund weapons, while combatants on both sides are reportedly turning to the stimulant to help them keep fighting.

According to the UN Office on Drugs and Crime, Syria has long been a transit point for drugs coming from Europe, Turkey and Lebanon and destined for the wealthy Gulf states. Hacker collective Anonymous claims ISIS has plans for more attacks on Sunday. *Update: The FBI says the plot to attack the wrestling event in Atlanta is not credible. 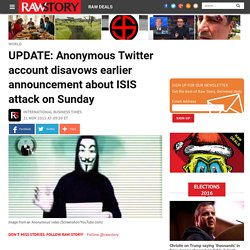 Anonymous, the loose collective of online activists, said Saturday it has uncovered information about Islamic State group attacks in Paris as well as on locations in the U.S., Indonesia, Italy and Lebanon, all apparently set for Sunday. OpParisIntel, a group within Anonymous, released a statement saying it had collected information about imminent attacks by the militant… 15 Years Of Terror - Map Of Terrorist Incidents Since 2000. Map and video created by Milan R. 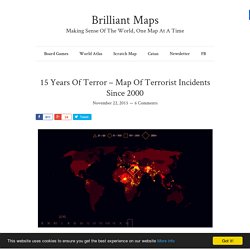