Law professor's response to BLM shirt complaint. Kids Spend Less Time Outdoors Than Prisoners. A Dark Consensus About Screens and Kids Begins to Emerge in Silicon Valley. SAN FRANCISCO — The people who are closest to a thing are often the most wary of it. Technologists know how phones really work, and many have decided they don’t want their own children anywhere near them. A wariness that has been slowly brewing is turning into a regionwide consensus: The benefits of screens as a learning tool are overblown, and the risks for addiction and stunting development seem high. The debate in Silicon Valley now is about how much exposure to phones is O.K. 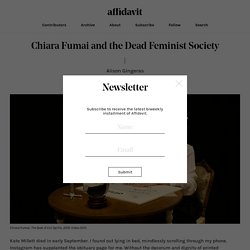 I found out lying in bed, mindlessly scrolling through my phone. Baby Boomers versus Milennials Kate Alexander Shaw. 10 things that change forever when you live abroad ‹ GO Blog. “Life might be difficult for a while, but I would tough it out because living in a foreign country is one of those things that everyone should try at least once. 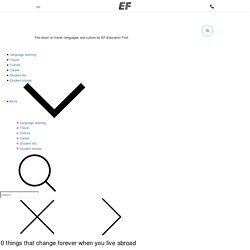 My understanding was that it completed a person, sanding down the rough provincial edges and transforming you into a citizen of the world.” – David Sedaris Moving abroad and starting over in a new country is one of the most terrifying yet exhilarating adventures ever. STRIKE! Magazine – On the Phenomenon of Bullshit Jobs. In the year 1930, John Maynard Keynes predicted that, by century's end, technology would have advanced sufficiently that countries like Great Britain or the United States would have achieved a 15-hour work week. 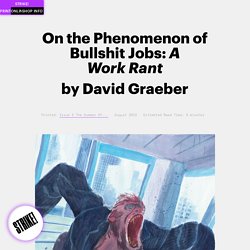 There's every reason to believe he was right. In technological terms, we are quite capable of this. And yet it didn't happen. Instead, technology has been marshaled, if anything, to figure out ways to make us all work more. In order to achieve this, jobs have had to be created that are, effectively, pointless. Bullshit Jobs: A Theory by David Graeber review – the myth of capitalist efficiency. I had a bullshit job once. 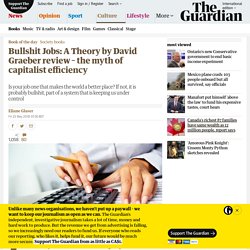 It involved answering the phone for an important man, except the phone didn’t ring for hours on end, so I spent the time guiltily converting my PhD into a book. Do We Write Differently on a Screen? 'A torrent of ghastly revelations': what military service taught me about America. My first and only war tour took place in Afghanistan in 2010. 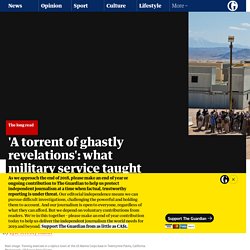 I was a US Marine lieutenant then, a signals intelligence officer tasked with leading a platoon-size element of 80 to 90 men, spread across an area of operations the size of my home state of Connecticut, in the interception and exploitation of enemy communications. That was the official job description, anyway. The year-long reality consisted of a tangle of rearguard management and frontline supervision. Years before Helmand province, Afghanistan, however, there was Twentynine Palms, California. From the summer of 2006 to the summer of 2007, I was trained as a lance corporal in my military occupational specialty of tactical data systems administration (a specialty I would later jettison after earning my officer commission in 2008). Our time at the Palms was preceded by three weeks of marine combat training at Camp Geiger, North Carolina, and, before that, 12 weeks of Marine basic training at Parris Island, South Carolina.

Why Thought Suppression is Counter-Productive. When Situations Not Personality Dictate Our Behaviour. A modern test of an ancient bible story demonstrates the power of situations to trump personality in determining behaviour.

Finding The Surprising Gaps in Your Self-Knowledge. Are you an independent person? 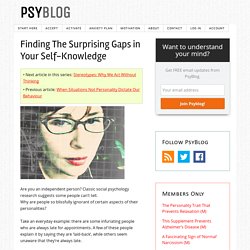 Classic social psychology research suggests some people can’t tell. Why are people so blissfully ignorant of certain aspects of their personalities? The Chameleon Effect. Does mimicking other people’s body language really make them like us? 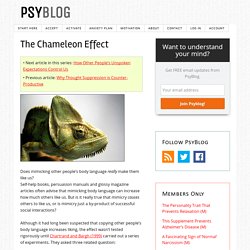 Self-help books, persuasion manuals and glossy magazine articles often advise that mimicking body language can increase how much others like us. But is it really true that mimicry causes others to like us, or is mimicry just a by-product of successful social interactions? Although it had long been suspected that copying other people’s body language increases liking, the effect wasn’t tested rigorously until Chartrand and Bargh (1999) carried out a series of experiments. They asked three related question: How Other People's Unspoken Expectations Control Us. We quickly sense how others view us and play up to these expectations. 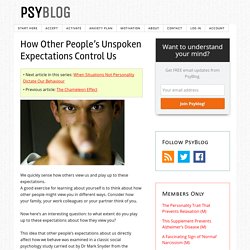 A good exercise for learning about yourself is to think about how other people might view you in different ways. Consider how your family, your work colleagues or your partner think of you. How Do You Create Happier Employees? Let’s face it managing people can be tough, and despite your best efforts your people may be part of the growing numbers who feel disengaged from their jobs. 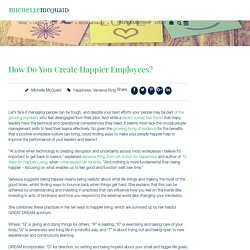 And while a recent survey has found that many leaders have the technical and operational competencies they need, it seems most lack the crucial people management skills to lead their teams effectively. So given the growing body of evidence for the benefits that a positive workplace culture can bring, could finding ways to make your people happier help to improve the performance of your leaders and teams?

That’s why nothing is more reality-warping than the shock of having come to believe something untrue — an experience so disorienting yet so universal that it doesn’t spare even the most intelligent and self-aware of us, for it springs from the most elemental tendencies of human psychology. “The confidence people have in their beliefs is not a measure of the quality of evidence,” Nobel-winning psychologist Daniel Kahneman asserted in examining how our minds mislead us, “but of the coherence of the story that the mind has managed to construct.”

To be sure, we all perform micro-cons on a daily basis. Minimalistic Cartoons Reveal Differences Between Tourists and Travelers. A group of new astronauts join NASA under the Artemis program and could be the first to step on Mars. It has been more than two years in the making, but 13 new astronauts have finally joined NASA under the mission that will bring the first female to the moon -and some may be the first humans to step on Mars. Voici quelques points clés pour comparer l'intelligence collective à la stupidité collective. En cette période d'infoxication et de recul de la tolérance observés de manière croissante, il est bon de rappeler notamment qu'une vision étriquée du monde ou encore des informations fausses sont des ingrédients qui favorisent une véritable et dangereuse imbécilité collective.