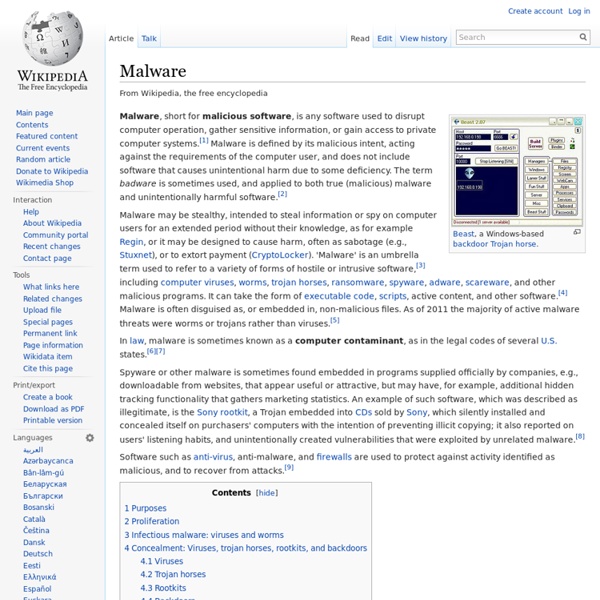 Malware, short for malicious software, is any software used to disrupt computer operation, gather sensitive information, or gain access to private computer systems.[1] Malware is defined by its malicious intent, acting against the requirements of the computer user, and does not include software that causes unintentional harm due to some deficiency. The term badware is sometimes used, and applied to both true (malicious) malware and unintentionally harmful software.[2] In law, malware is sometimes known as a computer contaminant, as in the legal codes of several U.S. states.[6][7] Spyware or other malware is sometimes found embedded in programs supplied officially by companies, e.g., downloadable from websites, that appear useful or attractive, but may have, for example, additional hidden tracking functionality that gathers marketing statistics. Purposes[edit] Malware by categories on 16 March 2011. Proliferation[edit] Infectious malware: viruses and worms[edit] Viruses[edit] Rootkits[edit] Related:  aboalfotoh

The Five Biggest Threats to Your Kids’ Privacy, and What You Can Do About Them Remember back in school, when your teachers warned that everything you did would go on your permanent record? It turns out your teachers have become right. That permanent record is the Internet. It’s hard to be a fully functioning adult in 2014 and not leave behind a digital trail. From the moment they emerge from the womb, they’re generating data, which is then eagerly absorbed and stored by Internet companies, government agencies and some evil no-goodniks. Despite federal laws prohibiting the collection of data from children under the age of 13, dossiers are constantly being created about your kids, whether it’s Google capturing their search histories, advertisers creating profiles of their interests, or their grandparents tagging photos of them on Facebook. Canadian Singles Find New Ways To Meet Sure, you could try to keep them off the net, refuse to buy them cell phones, go Full Amish if you have to. UrthBox Healthy Snack Boxes. Math Practice - Ages 5-15 Questions, complaints, kudos?

Spyware Spyware is software that aids in gathering information about a person or organization without their knowledge and that may send such information to another entity without the consumer's consent, or that asserts control over a computer without the consumer's knowledge.[1] Whenever spyware is used for malicious purposes, its presence is typically hidden from the user and can be difficult to detect. Some spyware, such as keyloggers, may be installed by the owner of a shared, corporate, or public computer intentionally in order to monitor users. While the term spyware suggests software that monitors a user's computing, the functions of spyware can extend beyond simple monitoring. Sometimes, spyware is included along with genuine software, and may come from a malicious website. In German-speaking countries, spyware used or made by the government is sometimes called govware. Routes of infection[edit] The installation of spyware frequently involves Internet Explorer. Effects and behaviors[edit]

Portmanteau A portmanteau (/pɔːrtˈmæntoʊ/ ( Origin[edit] The word portmanteau was first used in this sense by Lewis Carroll in the book Through the Looking-Glass (1871),[10] in which Humpty Dumpty explains to Alice the coinage of the unusual words in "Jabberwocky",[11] where slithy means "slimy and lithe" and mimsy is "miserable and flimsy". Humpty Dumpty explains to Alice the practice of combining words in various ways: You see it's like a portmanteau—there are two meanings packed up into one word. In his introduction to The Hunting of the Snark, Carroll uses portmanteau when discussing lexical selection: Humpty Dumpty's theory, of two meanings packed into one word like a portmanteau, seems to me the right explanation for all. An occasional synonym for "portmanteau word" is frankenword, an autological word exemplifying the phenomenon it describes, blending "Frankenstein" and "word".[16] Examples in English[edit] Standard English[edit] Formal[edit] "Jeoportmanteau!" Informal[edit] Business[edit] Arabic[edit]

Malware definition – What is it and how to remove it | Malwarebytes You know how every year the medical community campaigns for everyone to get a flu shot? That’s because flu outbreaks typically have a season—a time of year when they start spreading and infecting people. In contrast, there are no predictable seasonal infections for PCs, smartphones, tablets, and enterprise networks. For them, it’s always flu season. But instead of suffering chills and body aches, users can fall ill from a kind of machine malady—malware. Malware infections come at us like a torrent of water from a fire hose, each with its own methods of attack—from stealthy and sneaky to subtle like a sledgehammer. What is malware? Malware, or “malicious software,” is an umbrella term that describes any malicious program or code that is harmful to systems. Hostile, intrusive, and intentionally nasty, malware seeks to invade, damage, or disable computers, computer systems, networks, tablets, and mobile devices, often by taking partial control over a device’s operations. How do I get malware?

How to Protect Your Computer from Hackers, Spyware and Viruses This article has been inspired by a situation I ran into while visiting a cousin in India. Since I’m in the IT field, she asked me to take a look at her computer since it was acting “funny”. The “funny” part was that the computer would automatically restart whenever you tried to install ANY software onto it or download any program from the Internet. The first thing I noticed was that there was no anti-virus software installed on the computer, so my first goal was to install an anti-virus program and check for viruses. But of course, the virus that was already on the computer would not let me install or download anything! Smart virus! Most of the viruses on the computer were hidden in files that had been downloaded off the Internet: songs, videos, and movies. This is by no means a comprehensive list, so if you have any suggestions, please feel free to comment and I’ll add them on! 1. Avira – Avira has a free version that was ranked #3 in 2014 for detecting viruses. 2. 3. 4. 5. 6. 7. 8. 9.

Network Access Control Network Access Control (NAC) is an approach to computer network security that attempts to unify endpoint security technology (such as antivirus, host intrusion prevention, and vulnerability assessment), user or system authentication and network security enforcement.[1][2] Background[edit] Network Access Control aims to do exactly what the name implies—control access to a network with policies, including pre-admission endpoint security policy checks and post-admission controls over where users and devices can go on a network and what they can do. In plain English[edit] When a computer connects to a computer network, it is not permitted to access anything unless it complies with a business defined policy; including anti-virus protection level, system update level and configuration. Goals of NAC[edit] Because NAC represents an emerging category of security products, its definition is both evolving and controversial. Mitigation of non-zero-day attacks Policy enforcement Concepts[edit] Quarantine

Malware vs Viruses: What's the Difference? July 27, 2018 | By admin Loading... Understanding the difference between malware and viruses is very important. A virus is just one type of malware, but the term is more widely used by the public. The term malware refers to any malicious software, including a computer virus. Malware is infecting computers and mobile devices at an increasingly greater pace. What is a Malware? Malware is software written specifically to harm and infect the host system. Virus: As discussed, Virus is a specific type of malware by itself. Adware: Adware is also known as advertising-supported software. Spyware: This type of malicious software, spies on you, tracks your internet activities. Worms: This type of malware will replicate itself and destroys information and files saved on the host PC. Trojan: Trojans are a type of virus that are designed to make a user think they are a safe program and run them. Get your Website Secured Today Related Resources: Best Free Antivirus of 2018 Free Virus Protection