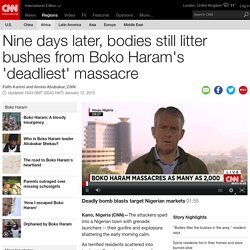 Residents hid under scant brush. Bullets pierced them. Some sought refuge in their homes. They were burned alive. Many who tried to cross into neighboring Chad drowned while trying to swim through Lake Chad. By the time the weapons went quiet, local officials reported death tolls ranging from hundreds to as many as 2,000 people. Bodies everywhere That was January 3, nine days ago. On Monday, bodies still littered the bushes in the area. "It is still not safe to go and pick them up for burial," said Musa Bukar, the chairman of the local government where Baga is located. No emergency crews will enter the villages where militants are still running amok, local authorities said. Top Somali anti-terrorism officer shot dead in Mogadishu. Boko Haram. Boko Haram ("Western education is forbidden"), officially called Jama'atu Ahlis Sunna Lidda'Awati Wal-Jihad (People Committed to the Prophet's Teachings for Propagation and Jihad), is a militant Islamist movement based in northeast Nigeria. 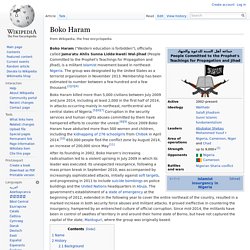 The group was designated by the United States as a terrorist organisation in November 2013. Membership has been estimated to number between a few hundred and a few thousand.[2][3][4] After its founding in 2002, Boko Haram's increasing radicalisation led to a violent uprising in July 2009 in which its leader was executed. Its unexpected resurgence, following a mass prison break in September 2010, was accompanied by increasingly sophisticated attacks, initially against soft targets, and progressing in 2011 to include suicide bombings on police buildings and the United Nations headquarters in Abuja. 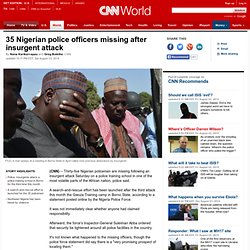 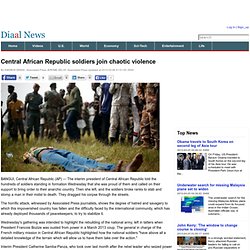 Then she left, and the soldiers broke ranks to stab and stomp a man in their midst to death. They dragged his corpse through the streets. The horrific attack, witnessed by Associated Press journalists, shows the degree of hatred and savagery to which this impoverished country has fallen and the difficulty faced by the international community, which has already deployed thousands of peacekeepers, to try to stabilize it. Wednesday's gathering was intended to highlight the rebuilding of the national army, left in tatters when President Francois Bozize was ousted from power in a March 2013 coup.

But after she left, the soldiers spotted a suspected former member of the Seleka rebellion that had overthrown the government. Muslim Brotherhood leader: Qatar asked us to leave. By Ashley Fantz and Salma Abdelaziz, CNN September 14, 2014 -- Updated 2203 GMT (0603 HKT) Leading members of Muslim Brotherhood's political wing say Qatar asked them to moveQatar has not publicly addressed the matter A Muslim Brotherhood member says online that other members will honor the request (CNN) -- Several top members of the Muslim Brotherhood have been asked to leave Qatar, an Egyptian leader of the group said Sunday. 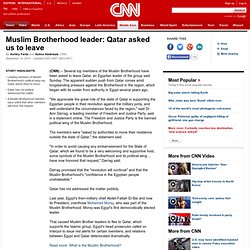 The apparent sudden push from Qatar comes amid longstanding pressure against the Brotherhood in the region, which began with its ouster from authority in Egypt several years ago. "We appreciate the great role of the state of Qatar in supporting the Egyptian people in their revolution against the military junta, and well understand the circumstances faced by the region," said Dr. The members were "asked by authorities to move their residence outside the state of Qatar," the statement said.

Qatar has not addressed the matter publicly. Sister of 'Lady al Qaeda' sends message to militants. Aafia Siddiqui is serving 86-year sentence in a Texas jail for attempted murderThe neuroscientist shot at Americans in Afghanistan in 2008, authorities saidMilitants have named her in potential hostage swap dealsBut her sister says she has no terror links and has been wrongly jailed Karachi, Pakistan (CNN) -- The sister of a Pakistani prisoner described as the "poster girl" for Islamic jihad has urged ISIS hostage-takers to let their captives go. 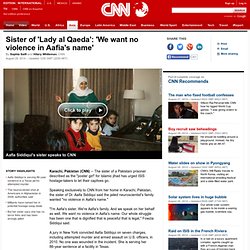 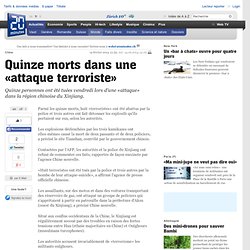