How can I protect my Windows PC against malware? 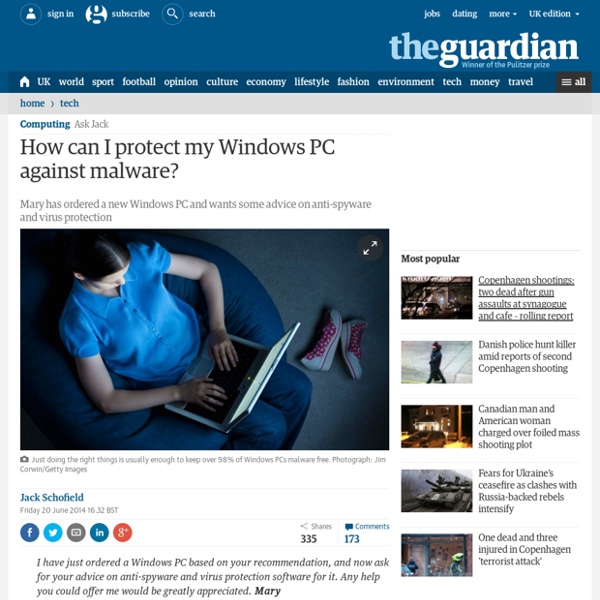 I have just ordered a Windows PC based on your recommendation, and now ask for your advice on anti-spyware and virus protection software for it. Any help you could offer me would be greatly appreciated. Mary Mass-market malware is a numbers game, played mostly with familiar off-the-shelf exploit kits (EKs). Most of the victims are people who don't install updates to plug security holes not just in Windows but also in Oracle's Java, Adobe Flash, Adobe Reader, and other widely-used programs. They're people who either don't run anti-virus software and firewalls, or don't keep virus signatures up to date. I ran into one yesterday when the Labour party press team unintentionally ("we were hacked") tweeted a link to an owl video that wanted me to install a "Flash update" that contained viruses. Just doing the right things is usually enough to keep more than 98% of Windows PCs malware free, barring accidents. Keep up to date Anti-virus software Cross-checks and rescues

GameOver Zeus: Removal, detection and how you can protect yourself - News - Gadgets and Tech - The Independent The warning came after the FBI successfully disrupted a major cybercriminal network in the US from using the viruses to infect computers and steal data. GameOver Zeus, also known as P2PZeuS, was designed by Russia and Ukrainian gangs to find and harness computer files that give access to banking and financial information, while Cryptolocker encrypts all files on a target’s computer and demands the user pays around £300 to unlock the file. Almost 250,000 computers worldwide have been infected with CryptoLocker since it emerged in April and it has so far been used to extort payments of more than $27m (£16m), according to the FBI. Industry experts have been quick to back up the stern message from the National Crime Agency, whose advice to visit internet awareness group Get Safe Online's's website led to the site going down for 15 hours.

Bank Hackers Steal Millions via Malware Photo PALO ALTO, Calif. — In late 2013, an A.T.M. in Kiev started dispensing cash at seemingly random times of day. No one had put in a card or touched a button. Cameras showed that the piles of money had been swept up by customers who appeared lucky to be there at the right moment. How to Protect Your Computer from Hackers, Spyware and Viruses This article has been inspired by a situation I ran into while visiting a cousin in India. Since I’m in the IT field, she asked me to take a look at her computer since it was acting “funny”. The “funny” part was that the computer would automatically restart whenever you tried to install ANY software onto it or download any program from the Internet. The first thing I noticed was that there was no anti-virus software installed on the computer, so my first goal was to install an anti-virus program and check for viruses. But of course, the virus that was already on the computer would not let me install or download anything! Smart virus!

How Do I Protect Myself Against Malware? The best way to deal with a malware attack is to avoid getting infected in the first place. This can be a difficult feat if your adversary has access to zero day attacks—attacks that exploit a previously-unknown vulnerability in a computer application. TOP Spy Cell Phone Software Reviews. Before you select Cell Phone Spy Software you should learn what exactly it is used for and how it works on a target mobile device. Make sure you study the popular cell phone tracking applications reviews we provide to make a conscious choice of the spy software. Don’t forget there are online companies that misinform their clients with the aim of getting higher profits. Unlike them we are interested in long-term mutually beneficial cooperation and we ask you to report us about any suspicious firms you’ve faced (either in your comment or by an email)! Your feedback will be really helpful. It will let us stop the cell phone tracking software reputation undermining by crooks of all kinds.

Which nation-state is behind the sophisticated, stealthy Regin malware? Symantec Security Response has discovered a new malware called Regin which, they say, "...displays a degree of technical competence rarely seen and has been used in spying operations against governments, infrastructure operators, businesses, researchers, and private individuals." This back-door trojan has been in use, according to the security company, since at least 2008, and has stayed under the radar since. The level of quality and the amount of effort put into keeping it secret convinces Symantec that it is a primary cyberespionage tool of a nation state. Regin is a multi-stage attack, each stage but the first encrypted and none by themselves especially revealing about the overall attack.

The Five Biggest Threats to Your Kids’ Privacy, and What You Can Do About Them Remember back in school, when your teachers warned that everything you did would go on your permanent record? It turns out your teachers have become right. That permanent record is the Internet. It’s hard to be a fully functioning adult in 2014 and not leave behind a digital trail. FDIC: Safe Internet Banking Tips for Safe Banking Over the Internet As use of the Internet continues to expand, more banks and thrifts are using the Web to offer products and services or otherwise enhance communications with consumers. The Internet offers the potential for safe, convenient new ways to shop for financial services and conduct banking business, any day, any time. However, safe banking online involves making good choices - decisions that will help you avoid costly surprises or even scams. This brochure offers information and tips to help you if you are thinking about or already using online banking systems. We will tell you how to: