For Dignity and Development, East Africa Curbs Used Clothes Imports - The New York Times. This Simple Box Serves Up Running Water And Clean Electricity In Remote Locations. Off Grid Box, an Italian startup, was founded to bring clean water and renewable energy to the millions of the people in the world who still live without. 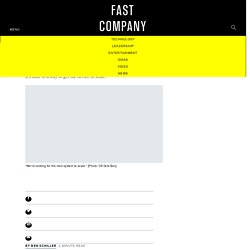 The box itself is a simple container, measuring six by six by six feet. Bombshell: Initial Thoughts on the Washington Post’s Game-Changing Story. The Washington Post this afternoon published a stunning story reporting that President Trump disclosed highly-classified information to Russian Foreign Minister Sergei Lavrov and Ambassador Sergey Kislyak during their visit to the Oval Office last week. 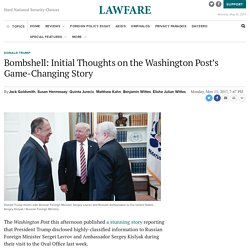 300 Sustainable Solutions To Turn Global Challenges Into Business Opportunities. In the spirit of this risk-to-opportunity ethos, a new website called the Global Opportunity Explorer contains business solutions for coping with global challenges, from water scarcity to hunger to urban transportation. 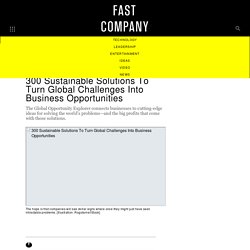 Are Your Buying Habits Remotely Ethical? This Bank Account Will Tell You. “When a controversy springs up around, say, Uber, people get upset, but what does that really tell you about how the company is acting day in and day out?” 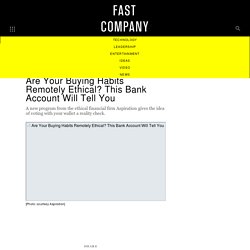 Andrei Cherny, CEO of the ethical financial firm Aspiration, tells Fast Company. Cookies are Not Accepted - New York Times. Bangladesh country profile. Bangladesh is one of the world's most densely populated countries, with its people crammed into a delta of rivers that empties into the Bay of Bengal. 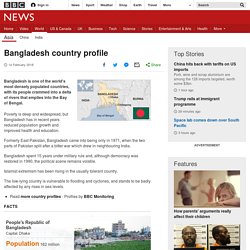 Poverty is deep and widespread, but Bangladesh has in recent years reduced population growth and improved health and education. Formerly East Pakistan, Bangladesh came into being only in 1971, when the two parts of Pakistan split after a bitter war which drew in neighbouring India. Bangladesh spent 15 years under military rule and, although democracy was restored in 1990, the political scene remains volatile. Bangladesh- A short history. Birth of Bangladesh: History of evolution from 1947 to 1971.

Peña Blanca in 2016. What's Happening Now? - Living On One. This past year, we have continued to keep in touch with Rosa, Anthony and Chino, document their lives for future films, visit Peña Blanca to assess needs, and raise money for life changing projects through our partners Mayan Families and Whole Planet Foundation. 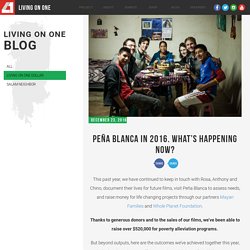 Home - Living On One. TED talk: The Financial Secrets of the World's Poor. New UNHCR Data On Refugee Crisis Shows Poor Countries Do More Than Their Share : Goats and Soda. A new report shows that the refugee crisis hasn't slowed down — and people don't always end up where you think. 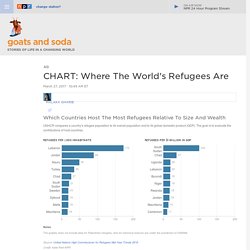 The flow of refugees is steadily increasing, according to the U.N. Refugee Agency (UNHCR). As of mid-2016, there were 16.5 million refugees globally, 5 million more than in mid-2013. More than 30 percent of all refugees as of mid-2016 came from Syria, the largest source of global refugees. This growing refugee population brings many challenges. The latest figures from the U.N. The Green Revolution: Waging A War Against Hunger. How Trump inherited Obama's weird legal climate battle against 21 young people.

Ayiti: The Cost of Life. Forbes Welcome. Hundreds of Coffee Shops Are Donating $1 for Every Cup Sold This Weekend to H... Blue Bottle Coffee When billions of people enjoy their cups of coffee today, language won’t matter. 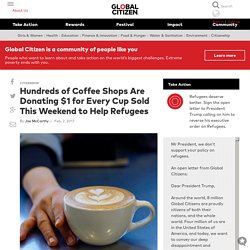 Religion won’t matter. Race, nationality, gender, political beliefs — none of these things will matter. Drought and Famine: Crash Course World History #208. Poverty & Our Response To It: Crash Course Philosophy #44. Mr. President, We Don’t Support Your Policy on Refugees. Dear President Trump, Around the world, 8 million Global Citizens are proudly citizens of both their nations and the whole world. 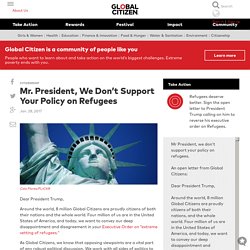 Four million of us are in the United States of America, and today, we want to convey our deep disappointment and disagreement in your Executive Order on “extreme vetting of refugees. " As Global Citizens, we know that opposing viewpoints are a vital part of any robust political discussion. We work with all sides of politics to ensure that governments continue play a leading role in ending extreme poverty.

TAKE ACTION: Reverse President Trump’s Executive Order to Ban Refugees. Six maps that show the anatomy of America’s vast infrastructure - Washington Post. Problem loading page. Spain's 'Robin Hood Restaurant' Charges The Rich And Feeds The Poor. The Netherlands Sets Up Abortion Fund in Challenge to Trump Policy. The Dutch government is already making steps to fill the gap that will be left by US President Donald Trump’s “Global Gag Rule,” a federal ban on all funding to international health organizations that administer or discuss abortion. 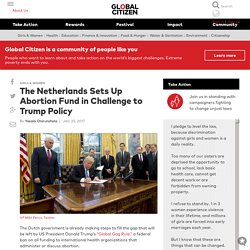 In response, the Netherlands’ development minister Lilianne Ploumen has announced a plan for a new international fund to finance access to birth control and abortion. Log In - New York Times. Global Studies Newsletters. 10 Investigative Reporting Outlets to Follow. 10 Investigative Reporting Outlets to [...] Dustin Hoffman and Robert Redford as The Washington Post's Carl Bernstein and Bob Woodward in the 1976 film All the President's Men.