Benghazi panel begins hearings with questions on US diplomats' safety. The select Benghazi Committee holds its first open hearing Wednesday, employing broad congressional powers to try to answer lingering questions ranging from what led to the fatal 2012 terror strikes on a U.S. outpost in Libya to what is being done to better protect U.S. diplomats worldwide. 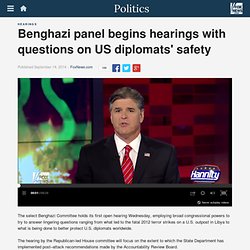 The hearing by the Republican-led House committee will focus on the extent to which the State Department has implemented post–attack recommendations made by the Accountability Review Board. The department created the five-member, independent board just weeks after the Sept. 11, 2012, attacks in which four Americans -- Ambassador Chris Stevens, information specialist Sean Smith and Navy SEALs Tyrone Woods and Glen Doherty -- were killed. “There are still facts to learn about Benghazi and information that needs to be explained in greater detail to the American people,” Rep. Trey Gowdy, R-S.C., the committee chairman and a former federal prosecutor, said earlier this month. U.S. Arab states 'offer help with air strikes' against Islamic State.

ISIS: British connection to the beheadings (Opinion) Your video will begin momentarily. 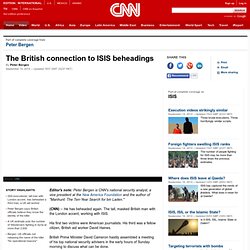 ISIS executioner, tall man with London accent, has beheaded a third man, a UK aid workerPeter Bergen says British officials believe they know the identity of the killerA UK estimate puts the number of Westerners fighting in Syria at more than 2,600Bergen: UK officials not releasing the name of the killer "for operational reasons" Editor's note: Peter Bergen is CNN's national security analyst, a vice president at the New America Foundation and the author of "Manhunt: The Ten-Year Search for bin Laden. " (CNN) -- He has beheaded again. The tall, masked British man with the London accent, working with ISIS. His first two victims were American journalists. British Prime Minister David Cameron hastily assembled a meeting of his top national security advisers in the early hours of Sunday morning to discuss what can be done. 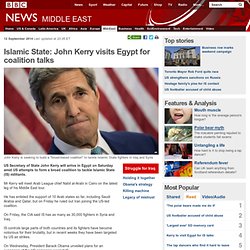 Mr Kerry will meet Arab League chief Nabil al-Arabi in Cairo on the latest leg of his Middle East tour. He has enlisted the support of 10 Arab states so far, including Saudi Arabia and Qatar, but on Friday he ruled out Iran joining the US-led coalition. On Friday, the CIA said IS has as many as 30,000 fighters in Syria and Iraq.

IS controls large parts of both countries and its fighters have become notorious for their brutality, but in recent weeks they have been targeted by US air strikes. On Wednesday, President Barack Obama unveiled plans for an expansion of the US campaign against IS. He vowed to "hunt down terrorists who threaten our country, wherever they are. " Taking on ISIS: That which we call a 'war' ... Your video will begin momentarily. 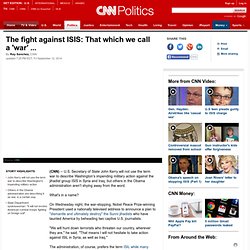 "We will hunt down terrorists who threaten our country, wherever they are," he said. CNN poll: Majority of Americans alarmed by ISIS. 7 in 10 poll respondents think ISIS can attack the United StatesThree-quarters responding to CNN/ORC poll support airstrikes against ISISA similar number of people thinks Obama should get Congress' approval Washington (CNN) -- Americans are increasingly concerned that ISIS represents a direct terror threat, fearful that ISIS agents are living in the United States, according to a new CNN/ORC International poll. 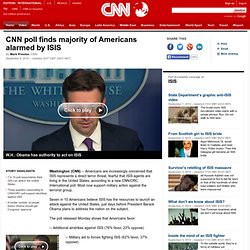 Most now support military action against the terrorist group. Seven in 10 Americans believe ISIS has the resources to launch an attack against the United States, just days before President Barack Obama plans to address the nation on the subject. Cheney Says Obama’s Policies Spurred Rise of Terrorists. President Barack Obama’s “disengaged” foreign policy has contributed to the rise of Islamic State militants in the Middle East and Russian aggression against Ukraine, former Vice President Dick Cheney said today. 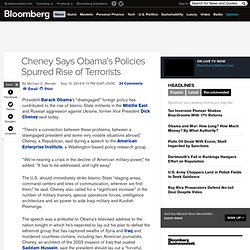 “There’s a connection between these problems, between a disengaged president and some very volatile situations abroad,” Cheney, a Republican, said during a speech to the American Enterprise Institute, a Washington-based policy research group. “We’re nearing a crisis in the decline of American military power,” he added. “It has to be addressed, and right away.” The U.S. should immediately strike Islamic State “staging areas, command centers and lines of communication, wherever we find them,” he said. Cheney also called for a “significant increase” in the number of military trainers, special operations forces, intelligence architecture and air power to aide Iraqi military and Kurdish Pesmerga. 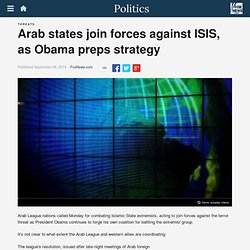 It's not clear to what extent the Arab League and western allies are coordinating. The league's resolution, issued after late-night meetings of Arab foreign ministers a day earlier, doesn't explicitly back American military action against the group. On a separate track, Obama administration officials met Friday in Wales with mostly European allies to discuss the Islamic State threat. Iraq crisis: Parliament swears in unity government. 8 September 2014Last updated at 17:13 ET Most members of the new government were sworn in on Monday Iraq's parliament has approved a new government with Sunni and Kurdish deputy prime ministers, as it seeks to tackle Islamic State (IS) militants who have seized large parts of the country. 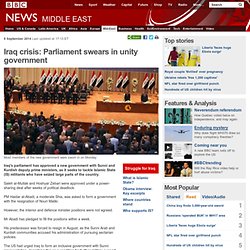 Saleh al-Mutlak and Hoshyar Zebari were approved under a power-sharing deal after weeks of political deadlock. PM Haidar al-Abadi, a moderate Shia, was asked to form a government with the resignation of Nouri Maliki. However, the interior and defence minister positions were not agreed. Mr Abadi has pledged to fill the positions within a week. His predecessor was forced to resign in August, as the Sunni Arab and Kurdish communities accused his administration of pursuing sectarian policies. The US had urged Iraq to form an inclusive government with Sunni representation, describing this as a condition for further military support against IS. Obama to Woo Skeptical Allies in Islamic State Offensive. President Barack Obama says he can rally Sunni Arab states to help him defeat Islamic State militants in Iraq and Syria because “this is their neighborhood.” 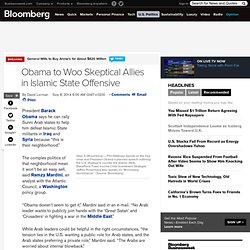 The complex politics of that neighborhood mean it won’t be an easy sell, said Ramzy Mardini, an analyst with the Atlantic Council, a Washington policy group. ISIS. Obama briefs Congress leaders on fight with IS. 9 September 2014Last updated at 17:56 ET It is not clear whether Congress will vote on action against IS militants President Barack Obama has briefed Congressional leaders on his plans for an expanded military campaign against Islamic State militants in Iraq and Syria. 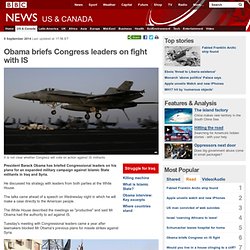 He discussed his strategy with leaders from both parties at the White House. The talks came ahead of a speech on Wednesday night in which he will make a case directly to the American people. The White House described the meetings as "productive" and said Mr Obama had the authority to act against IS. ISIS speech: 10 questions for Obama (Opinion) Your video will begin momentarily. Newt Gingrich: ISIS has awakened Americans to threat of radical IslamistsHe says President Obama can rally nation in his speech if he answers key questionsHow will he define victory?

Will military be given funds to carry out the fight properly? Gingrich says the U.S. needs to lead coalition vs. ISIS, and Congress should vote on it.