If Surrey were Syria. Our powerful new video brings home the reality of life under siege that millions of Syrian families face on a daily basis. 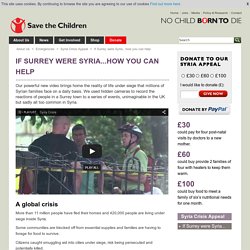 We used hidden cameras to record the reactions of people in a Surrey town to a series of events, unimaginable in the UK but sadly all too common in Syria. A global crisis More than 11 million people have fled their homes and 420,000 people are living under siege inside Syria. Some communities are blocked off from essential supplies and families are having to forage for food to survive. Citizens caught smuggling aid into cities under siege, risk being persecuted and potentially killed. The war's deadliest summer yet has sparked a global refugee crisis with Greece experiencing a refugee influx which has skyrocketed 750% compared with last year - two thirds of them are from Syria. Extreme choices “A tiny fraction of Syrian refugees make it to Europe. 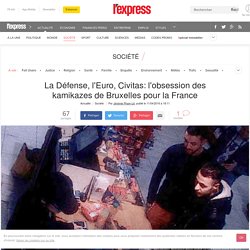 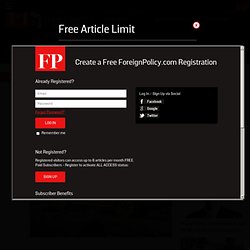 But on radical Islam's most prominent battlefield, al Qaeda appears to be having second thoughts about that approach. Ayman al-Zawahiri, Osama bin Laden's replacement as the emir of al Qaeda, just announced he's cutting ties with the Islamic State of Iraq and al-Shams, a group often known by the acronym ISIS. "Al Qaeda has no connection with the group called the ISIS, as it was not informed or consulted about its establishment," the group's central leadership wrote in a statement circulating in jihadist forums and published by the BBC. "It was not pleased with it and thus ordered its suspension.

Therefore, it is not affiliated with al Qaeda and has no organizational relationship with it. " The move carries risks for al Qaeda, which has now dropped its most active and high profile affiliate. Child/forced/slave labour, systematic sexual violence and human trafficking. Child Soldiers. Dear Religious Extremists: The Cameras Are Staying, And That's Final. Valued ‘Ally’ Saudi Arabia Supports Terrorism, Urges US War in Syria. Saudi Arabia, the brutal authoritarian theocracy that the democracy-promoting Washington claims as one of its closest allies, has a bit of a history of pressuring the U.S. into Middle East wars. 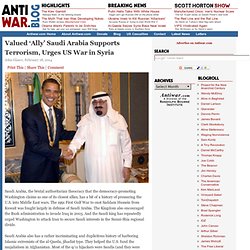 The 1991 First Gulf War to oust Saddam Hussein from Kuwait was fought largely in defense of Saudi Arabia. The Kingdom also encouraged the Bush administration to invade Iraq in 2003. And the Saudi king has repeatedly urged Washington to attack Iran to secure Saudi interests in the Sunni-Shia regional divide. Saudi Arabia also has a rather incriminating and duplicitous history of harboring Islamic extremists of the al-Qaeda, jihadist type. They helped the U.S. fund the mujahideen in Afghanistan. Behind the Arab Revolt Is a Word We Dare Not Speak. Shortly after the invasion of Iraq in 2003, I interviewed Ray McGovern, one of an elite group of CIA officers who prepared the President's daily intelligence brief. 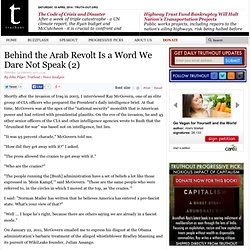 At that time, McGovern was at the apex of the "national security" monolith that is American power and had retired with presidential plaudits. On the eve of the invasion, he and 45 other senior officers of the CIA and other intelligence agencies wrote to Bush that the "drumbeat for war" was based not on intelligence, but lies. "It was 95 percent charade," McGovern told me. "How did they get away with it? " I asked. ‘Innocence of Muslims’: A Who’s Who of Those Involved with the Film. UPDATED: Friday, Sept. 14, 2 p.m. 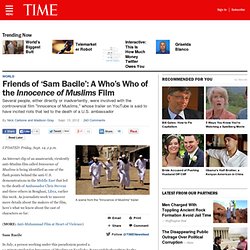 An Internet clip of an amateurish, virulently anti-Muslim film called Innocence of Muslims is being identified as one of the flash points behind the anti-U.S. demonstrations in the Middle East that led to the death of Ambassador Chris Stevens and three others in Benghazi, Libya, earlier this week. As journalists work to uncover more details about the makers of the film, here’s what we know about the cast of characters so far: (MORE: Anti-Muhammad Film at Heart of Violence) Sam Bacile In July, a person working under this pseudonym posted a 14-minute trailer for Innocence of Muslims on YouTube. “Islam is a cancer,” he repeated to both publications. Public-records searches by TIME and others have yielded nothing tangible about a Sam Bacile in California, leading many to conclude that the name is a pseudonym. The film allegedly calls the holy Muslim Prophet Muhammad a fraud and shows him engaged in sex acts.

The Muslim Terrorism Meme. "The War on Terror" Terrorism - & Related.