Far from keeping the peace, Nato is a threat to it. ‘Western powers are resisting the negotiated settlement that is the only way out in Ukraine for fear of seeming weak.' Illustration: Matt Kenyon For the west's masters of war, it's a good time to be in Wales. 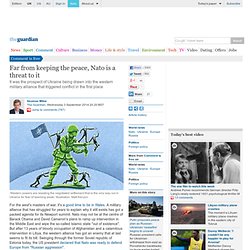 A military alliance that has struggled for years to explain why it still exists has got a packed agenda for its Newport summit. China gives cautious response to Obama's Islamic State call. BEIJING (Reuters) - China responded cautiously on Thursday to a call by U.S. 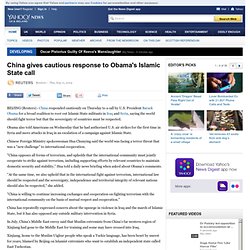 President Barack Obama for a broad coalition to root out Islamic State militants in Iraq and Syria, saying the world should fight terror but that the sovereignty of countries must be respected. Obama also told Americans on Wednesday that he had authorised U.S. air strikes for the first time in Syria and more attacks in Iraq in an escalation of a campaign against Islamic State. Chinese Foreign Ministry spokeswoman Hua Chunying said the world was facing a terror threat that was a "new challenge" to international cooperation. "China opposes all forms of terrorism, and upholds that the international community must jointly cooperate to strike against terrorism, including supporting efforts by relevant countries to maintain domestic security and stability," Hua told a daily news briefing when asked about Obama's comments.

(Reporting by Ben Blanchard; Editing by Nick Macfie) John Pilger: Breaking the last taboo - Gaza and the threat of world war in Ukraine. The attack on Gaza was an attack on all of us. 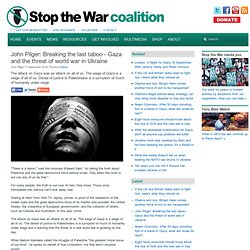 The siege of Gaza is a siege of all of us. Denial of justice to Palestinians is a symptom of much of humanity under siege. "There is a taboo," said the visionary Edward Said, "on telling the truth about Palestine and the great destructive force behind Israel. Only when this truth is out can any of us be free. " For many people, the truth is out now.

Israel has broken my heart: I’m a rabbi in mourning for a Judaism being murdered by Israel. Mobile Uploads - Mohammad Abdullah. A tale of two sieges: the Yazidis one in Iraq that wasn't and the one in Gaza that is. A false story of a massive Yazidi crisis and a largely mythical siege is now being used to justify a new war in Iraq. 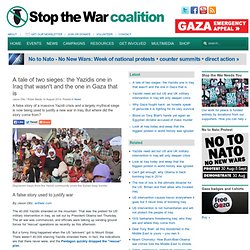 But where did the story come from? Displaced Iraqis from the Yazidi community cross the Syrian-Iraqi border A false story used to justify war By Jason Ditz, antiwar.com. Ferguson, MO and the “Israelization” of America’s Police Force. Ferguson, Mo is not about the militarization’s of America’s police force. 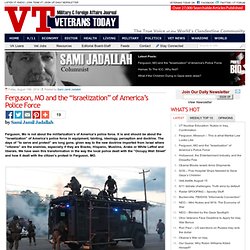 It is and should be about the “Israelization” of America’s police force in equipment, tainting, ideology, perception and doctrine. The days of “to serve and protect” are long gone, given way to the new doctrine imported from Israel where “citizens” are the enemies, especially if they are Blacks, Hispanic, Muslims, Arabs or White Leftist and liberals. We have seen this transformation in the way the local police dealt with the “Occupy Wall Street” and how it dealt with the citizen’s protest in Ferguson, MO. We should not be surprised with this massive earth-shattering shift in attitude, philosophy and doctrine. Michael Chertoff of Homeland Security, the ADL and Jewish Institute for National Security Affairs (JINSA) made sure that law enforcement agencies in the United States view citizens, all citizens as “potential terrorists” and should be dealt with as “terrorists”. 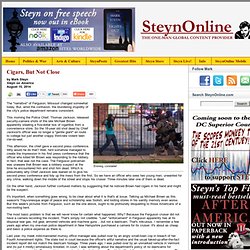 But, amid the confusion, the blundering stupidity of the city's police department remains consistent. This morning the Police Chief, Thomas Jackson, released security-camera shots of the late Michael Brown apparently stealing a five-dollar box of cigarillos from a convenience store. So the 18-year old shot dead by Chief Jackson's officer was no longer a "gentle giant" en route to college but just another crappy third-rate violent teen n'er-do-well. This afternoon, the chief gave a second press conference. Why would he do that? On the other hand, Jackson further confused matters by suggesting that he noticed Brown had cigars in his hand and might be the suspect. It's important, when something goes wrong, to be clear about what it is that's at issue. The most basic problem is that we will never know for certain what happened. Shouldn't a 'Ferguson' camo pattern be, like, 7/11 & Kool-Aid logos? Indeed. This is not a small thing.

M6 toll road terror alert and traffic chaos sparked by FAKE CIGARETTE on Megabus. Armed officers, troops, firefighters and bomb disposal experts all calledAfter nearly four hours investigating police admit it is a false alarmMan was craftily smoking an electronic cigarette into his bagE-cigarettes simulate smoking and the flavour of inhaled tobaccoAlmost 50 passengers were on the Megabus coach at the timeIt was travelling from Preston to London when it was raidedUsing an e-cigarette on a coach is legal as it only emits water vapour'I rang my wife and told her I might be on the news': Driver speaks of ordeal By Andy Dolan and Colin Fernandez and Nick Mcdermott Published: 08:18 GMT, 5 July 2012 | Updated: 13:10 GMT, 6 July 2012. 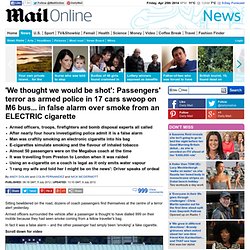