"Much Ado about Cyber-space" by Christian Pedersen. Abstract The threats residing in cyber-space are becoming well understood by policymakers and security experts alike. 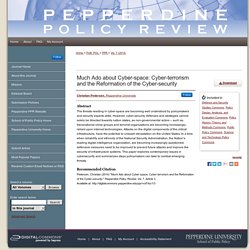 However, cyber-security defenses and strategies cannot solely be directed towards nation states, as non-governmental actors – such as transnational crime groups and terrorist organizations are becoming increasingly reliant upon internet technologies. Attacks on the digital components of the critical infrastructure, have the potential to unleash devastation on the United States. In a time when reliability and ethnicity of the National Security Administration, the Nation’s leading digital intelligence organization, are becoming increasingly questioned; defensive measures need to be improved to prevent future attacks and improve the security of infrastructure systems. This paper explores contemporary issues in cybersecurity and summarizes steps policymakers can take to combat emerging threats. 02681102.2013. Breaking the Cyber-Security Dilemma: Aligning Security Needs and Removing Vulnerabilities.

Current approaches to cyber-security are not working. 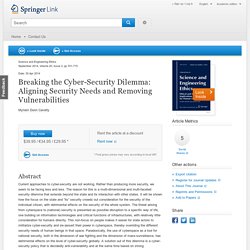 Rather than producing more security, we seem to be facing less and less. The reason for this is a multi-dimensional and multi-faceted security dilemma that extends beyond the state and its interaction with other states. It will be shown how the focus on the state and “its” security crowds out consideration for the security of the individual citizen, with detrimental effects on the security of the whole system. The threat arising from cyberspace to (national) security is presented as possible disruption to a specific way of life, one building on information technologies and critical functions of infrastructures, with relatively little consideration for humans directly.

This non-focus on people makes it easier for state actors to militarize cyber-security and (re-)assert their power in cyberspace, thereby overriding the different security needs of human beings in that space. The Militarisation of Cyber Security as a Source of Global Tension by Myriam Dunn Cavelty. ETH Zurich - Center for Security StudiesFebruary 1, 2012 STRATEGIC TRENDS ANALYSIS, Zurich, Möckli, Daniel, Wenger, Andreas, eds., Center for Security Studies, 2012 Abstract: Cyber security is seen as one of the most pressing national security issues of our time. 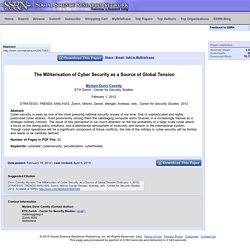 Due to sophisticated and highly publicized cyber attacks, most prominently among them the sabotaging computer worm Stuxnet, it is increasingly framed as a strategic-military concern. The result of this perception is too much attention on the low probability of a large scale cyber attack, a focus on the wrong policy solutions, and a detrimental atmosphere of insecurity and tension in the international system. Number of Pages in PDF File: 22. CyberTerrorismBookChapter2013.pdf. Cyber Terrorism and IR Theory: Realism, Liberalism, and Constructivism in the New Security Threat. The Internet is the world’s great equalizer. 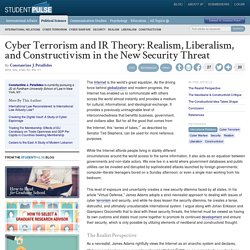 As the driving force behind globalization and modern progress, the Internet has enabled us to communicate with others across the world almost instantly and provides a medium for cultural, informational, and ideological exchange. It provides a previously unimaginable level of interconnectedness that benefits business, government, and civilians alike. But for all the good that comes from the Internet, this “series of tubes,” as described by Senator Ted Stephens, can be used for more nefarious purposes. While the Internet affords people living in starkly different circumstances around the world access to the same information, it also acts as an equalizer between governments and non-state actors. This level of exposure and uncertainty creates a new security dilemma faced by all states. As a neorealist, James Adams rightfully views the Internet as an anarchic system and declares, “Cyberspace has become a new international battlefield.” 1.) 2.) 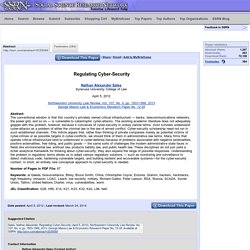 The existing academic literature does not adequately grapple with this problem, however, because it conceives of cyber-security in unduly narrow terms: most scholars understand cyber-attacks as a problem of either the criminal law or the law of armed conflict. Cyber-security scholarship need not run in such established channels. Number of Pages in PDF File: 67. UK's largest cyber-terror simulation gets underway on HMS Belfast. Although the cyber terrorist group is fictitious, and the attack itself no more than a simulation, the tension in the cabin is palpable. 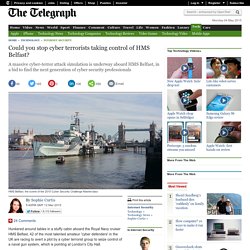 Those who excel in this challenge will be rewarded not only with glory, but with the possibility of a job in one of the country's major defence organisations. Proactive Cybersecurity: A Comparative Industry and Regulatory Analysis by Amanda Craig, Scott Shackelford, Janine S. Hiller. Amanda Craig Indiana University Maurer School of Law Scott Shackelford Indiana University - Kelley School of Business - Department of Business Law; Stanford Law School; Hoover Institution, Stanford University Janine S. 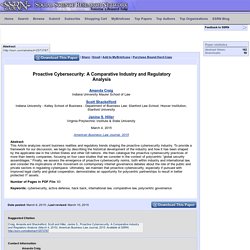