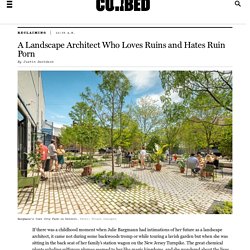 Photo: Prince Concepts If there was a childhood moment when Julie Bargmann had intimations of her future as a landscape architect, it came not during some backwoods tromp or while touring a lavish garden but when she was sitting in the back seat of her family’s station wagon on the New Jersey Turnpike. The great chemical plants exhaling sulfurous plumes seemed to her like magic kingdoms, and she wondered about the lives of the people inside. Later, when she was in college at Carnegie Mellon in the 1980s, Pittsburgh’s ozone-laced air gave her the same jolt of industrial excitement. “You’d come out of class and smell the steelworks,” she recalls. Bargmann, who has just been awarded the first $100,000 Cornelia Hahn Oberlander prize in landscape architecture, never lost her taste for such wounded and poisonous places, even after they’ve stopped being productive. Bargmann preaches an ethic of modesty and restraint.

11 Best Landscaping Plants You Should Know About. The rise of "blandscaping": Not all green spaces are created equal. Casanova + Hernandez models patterned public square on Albanian carpet. Dutch studio Casanova + Hernandez has completed a landscaping project in the Albanian village of Shiroka, comprising a waterfront plaza and streetscape that uses granite stones to replicate a traditional carpet pattern. 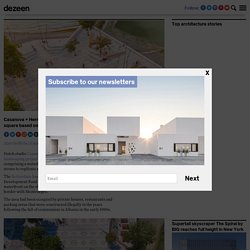 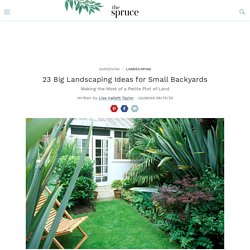 For those who live in places with tighter outdoor spaces, it's just a matter of practicing smart design on a smaller scale. Whether you live in an apartment, condo, townhouse, loft, or a house that has more indoor than outdoor space, you can still carve out a yard with soil, trees, plants, patios, seating, and even water features. Once you start researching, you'll find that garden styles and solutions are limitless—there's a backyard for every petite plot of land. The Full Story Behind the Controversial Rose Garden Redesign. Who knew that 10 crab apple trees gone AWOL could spark nationwide outrage? 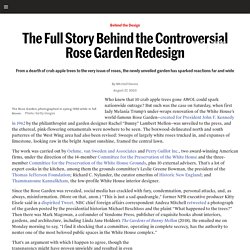 But such was the case on Saturday, when first lady Melania Trump’s under-wraps renovation of the White House’s world-famous Rose Garden—created for President John F. Kennedy in 1962 by the philanthropist and garden designer Rachel “Bunny” Lambert Mellon—was unveiled to the press, and the ethereal, pink-flowering ornamentals were nowhere to be seen. The boxwood-delineated north and south parterres of the West Wing area had also been revised: Sweeps of largely white roses trucked in, and expanses of limestone, looking raw in the bright August sunshine, framed the central lawn. The work was carried out by Oehme, van Sweden and Associates and Perry Guillot Inc., two award-winning American firms, under the direction of the 14-member Committee for the Preservation of the White House and the three-member Committee for the Preservation of the White House Grounds, plus 10 external advisers.

'Sand Pools' Are The Latest Backyard Trend. If you don’t live near the sea or just can’t travel this summer because of COVID-19 restrictions, there’s one more way to get your beach vacation — bring it to your own backyard. 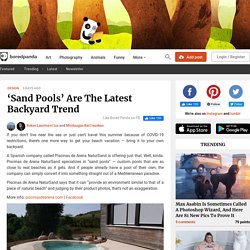 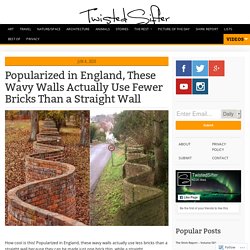 Popularized in England, these wavy walls actually use less bricks than a straight wall because they can be made just one brick thin, while a straight wall—without buttresses—would easily topple over. According to Wikipedia, these wavy walls are also known as: crinkle crankle walls, crinkum crankum walls, serpentine walls, or ribbon walls. The alternate convex and concave curves in the wall provide stability and help it to resist lateral forces. [source] The county of Suffolk seems to be home to countless examples of these crinkle crankle walls. As for the mathematics behind these serpentine walls and why the waves make them more resistant to horizontal forces like wind vs straight walls, check out this post by John D. Paul cocksedge's exploded view bridge in cape town to use invasive eucalyptus tree wood.

British designer paul cocksedge has announced his first ever project in south africa during design indaba 2020. called exploded view, the project consists of a permanent timber bridge across the liesbeek river in cape town, within the public open space of the upper liesbeek river garden. this is cocksedge’s second project exploring the use of wood and its environmental benefits following on from his please be seated installation at london design festival 2019. developed in collaboration with design indaba, building company X-Lam and WSP, the exploded view bridged by paul cocksedge will be constructed from invasive eucalyptus tree wood, transforming its negative effects by using it as a building material. the species, which originates from australia, was brought to south africa in the 1800s and as it’s not native, it has in fact, negatively impacted the water table. project info: name: exploded view bridge designer: paul cocksedge. 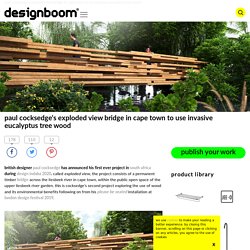 A Texas Garden Where the Rare and the Endangered Flourish. An hour’s drive north of Houston is Peckerwood Garden, with seven acres of rare and vanishing plants–many of them desert specimens that architecture professor John G. 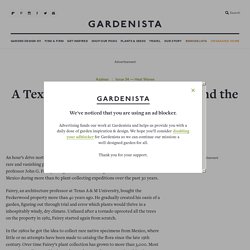 Fairey brought home from the high mountains of northern Mexico during more than 80 plant-collecting expeditions over the past 30 years. Fairey, an architecture professor at Texas A & M University, bought the Peckerwood property more than 40 years ago. He gradually created his oasis of a garden, figuring out through trial and error which plants would thrive in a inhospitably windy, dry climate. Ecosystem Kickstarter is a cardboard structure that fights soil erosion. 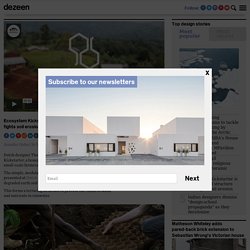 The simple, modular, cardboard system, which was first presented at Dutch Design Week, is embedded in a slope of degraded earth and filled with local soil. This forms a terracing structure to prevent the runoff of seeds and nutrients in rainwater. Ecosystem Kickstarter (Ecokick) biodegrades, and when it does it will grow a strip of "perennial terracing vegetation" because the cardboard is enriched with seeds and nutrients. Archismith creates secret garden within The Glass Fortress.

Bangkok architecture studio Archismith has built a garden enclosed by 20,000 glass bricks as part of a sales office for a residential development in Bangkok, Thailand. 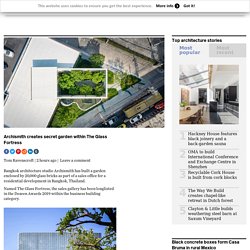 Named The Glass Fortress, the sales gallery has been longlisted in the Dezeen Awards 2019 within the business building category. Archismith designed the space to be largely disconnected from its site as a rival developer's sales gallery is located nearby. Pool of the Week: A Manmade Beach in the Portuguese Countryside. Swimming Pool of the Week: A Pool House with Vineyard Views in Sonoma. Originally conceived of as just a 500-square-foot box, a modest Northern California pool house in Sonoma got bigger after architect and owner Neal Schwartz started thinking about how to block views of neighboring properties—to focus instead on surrounding vineyards. The solution? Schwartz, founding principal of San Francisco firm Schwartz and Architecture, added a tiny courtyard to the pool house to make the structure longer.

Let’s take a look at what he did: Photography by Matthew Millman, Courtesy of Schwartz and Architecture. Above: The site plan shows the relationship of the pool house to the main house. Pavilion H simple. Landscape Ideas: Garden Design for a Swimming Pool Area. Camarim arquitectos designs a pool with the essence of an ancient temple. Dezeen. Japanese landscapers transform vehicle beds into mini truck gardens. Dezeen. Frida Escobedo designs secluded courtyard for Serpentine Pavilion 2018. Mexican architect Frida Escobedo has been named as the designer of this year's Serpentine Pavilion, which is to feature a latticed enclosure surrounding a pool of water. Escobedo is the 18th architect to design the Serpentine Pavilion, the prestigious annual commission from the Serpentine Galleries in London. The architect, who was born in 1979 and set up her Mexico City-based practice in 2006, will be the youngest Serpentine Pavilion architect yet and the first solo woman to take on the project since the inaugural commission by the late Zaha Hadid, in 2000.

Her design is for a courtyard enclosed by dark latticed walls, made from cement tiles. It is intended as a play on the celosia – a typical feature in Mexican architecture that allows breeze to permeate a building. Holland's Barriers to The Sea. Buitenschot Land Art Park – Hoofddorp, Netherlands - Atlas Obscura. It’s always a pain to live next to an airport, but the problem is amplified when you live in the Netherlands, a country that is as flat as a stroopwafel. When a fifth runway was added to Amsterdam’s Schiphol Airport in 2003, the local populous decided that enough was enough and demanded that the city did something to fix its noise pollution. The tricky thing about dampening airport noise is that the noise is a very low frequency with a very long wavelength, around 36 feet, so a simple barricade will do little to stop the drone.

SPACE10 open sources The Growroom – The Farm – Medium. Getting started To get going building The Growroom, there are certain elements that needs to be ready and available: CNC cutting files Download the CNC cutting files here and share with your local fab lab or maker space that can cut the pieces for you. Materials. Grow Your Own Food: Free Plans for IKEA's "Growroom" Vertical Farm. Back in October 2016, IKEA's external innovation hub Space10 announced the Growroom, a spherical structure that allows people to grow their own food locally and sustainably. Atlasobscura. The National Bonsai Museum isn’t the most heavily visited museum in Washington, D.C., but it might be the most unique.

Theconversation. Mazes are in vogue at the moment, from NBO’s Westworld, to the return of the British cult TV series, The Crystal Maze. Swirling brick circles form back garden for South London Gallery. Our backyard : the reveal - almost makes perfect. Finally, finaaaally can share the finished backyard with you guys! Sorry for the photo overload, but i wanted to show you every tiny little detail. Garden Visit: Landscaping for a Modern House in Christchurch, New Zealand: Gardenista. “The garden is a very important part of the living environment of the home,” says Kristina Pickford, architectural historian and owner of the Ballantyne House, a midcentury modern house in Christchurch, New Zealand. The 300-square-meter house, designed by New Zealand modernist architect Sir Miles Warren in 1959, sits on 2,642 square meters of land in the southern island of New Zealand.

Owners Pickford and Michael Wolfe have cultivated the garden, working with local gardeners, horticulturalists, and arborists since purchasing the property from the Ballantyne family in 2009. Christo’s 3km Floating Walkway Across Italy’s Lake Iseo Open To Public. Anyone who’s dreamed of walking on water now has the chance to do so! 16 Top Trends for Garden Design in 2016: Gardenista. Older. Before & After: A Modern Townhouse Garden in Brooklyn: Gardenista. Paradise Found: Designer Dan Pearson's Modern Garden for a Medieval Castle: Gardenista. Older. Deep Water: 10 Modern Plunge Pools and Spas: Gardenista. 10 Most Awesome Suspended Pools. Best Outdoor Living Space: Earth Inc.: Gardenista. 11 Ideas to Steal from Drought-Tolerant Gardens: Gardenista.