How to Grow 100 Pounds of Potatoes in 4 Square Feet 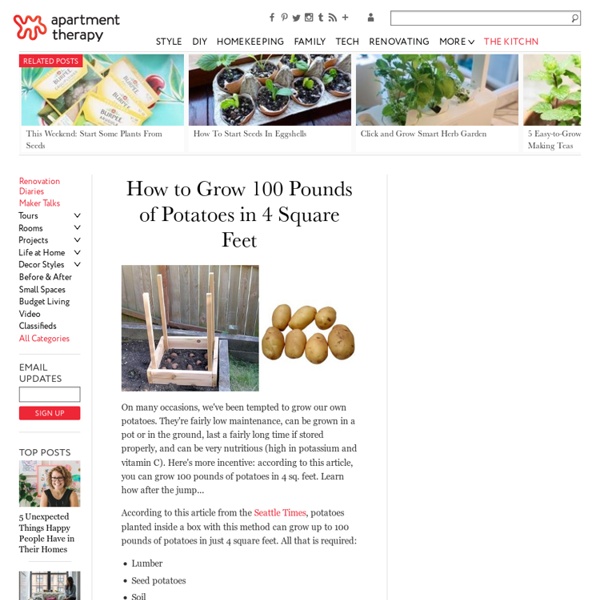 On many occasions, we've been tempted to grow our own potatoes. They're fairly low maintenance, can be grown in a pot or in the ground, last a fairly long time if stored properly, and can be very nutritious (high in potassium and vitamin C). Here's more incentive: according to this article, you can grow 100 pounds of potatoes in 4 sq. feet. Learn how after the jump... According to this article from the Seattle Times, potatoes planted inside a box with this method can grow up to 100 pounds of potatoes in just 4 square feet. All that is required: Lumber Seed potatoes Soil Careful attention to watering The Times' guide for building a potato growing box yields up to a 100 lbs. of potatoes in a mere 4 square feet is shown below: Plant as early as April or as late as August 1, with an approximated 3 month till harvest turnaround time. Here are some pointers from the article: Cut apart larger seed potatoes, making sure there are at least two eyes in each piece you plant.

Introduction to Evacuation and Bug Out Tactics The Bug Out Bag (BOB) is a vital tool for many survivalists. The BOB is a tool intended to make it help an individual survive the evacuation and transport to a safer area or location. Examples of scenarios that can require evacuation are hurricanes, earthquakes, dam breaks or the meltdown of a nuclear power plant. What a BOB should contain is a debated subject among survivalists and at forums like the Survivalist Boards. What you need is specific for your location and your context. Do you live urban or wilderness setting? Rosalind Creasys new Edible Landscaping After Rosalind Creasy tore out her front lawn and planted a vegetable garden, real estate agents stopped by to offer their services. With such great curb appeal, they said, the home would be an easy sell. That was in 1984, two years after the publication of Creasy's groundbreaking book, "Edible Landscaping." Since then, designer Creasy has established herself as one of the pioneer foodie-gardeners, and Sierra Club Books has just released the much-anticipated second edition of "Edible Landscaping" ($39.95). (That's the author's Black Satin blackberry vines, above, fruiting among the blooms of her climbing rose bush.

Everything You Need to Know About Composting With Worms Following my recent blog post on the Do-It-Yourself Vermipod, I’ve been receiving a ton of questions from folks who built Vermipods and are looking for information on how to manage and maintain their new pets. So here’s a compilation called Everything You Need To Know About Composting With Worms… Common Worm Species Eisenia fetida: Pronounced “iSEEnee a FETid a”, is a worm that can process a large amount of organic material in their natural environment. They tolerate large temperature, moisture and pH ranges and can also tolerate handling well. Eisenia andrei is closely related to the Eisenia fetida and is known as the “red tiger”.

untitled Jim Shockey and Alaska Tent & Tarp enter partnership. December 30, 2013 – Fairbanks Alaska. Alaska Tent & Tarp, manufacturer of the Arctic Oven tent, announced today a new multi-year partnership with professional hunter, Jim Shockey, and his company, Shockey Enterprises. The Arctic Oven tent is known worldwide as the premier extreme-environment camping tent, excelling in cold and wet climates. 4 Simple Steps to Grow a Hundred Pounds of Potatoes in a Barrel Container gardening isn't only for savvy urban gardeners and folks with limited space to grow, it can also be for folks who want to maximize their yields in a controlled environment. Not only does growing potatoes in a barrel reduce the amount of weeding and exposure to pests and fungi, you don't even have to risk shovel-damage to the tender potatoes by digging them out of the ground when they're done, just tip the container over! After extensive research to plan my own potatoes-in-a-barrel, I've boiled all of the recommendations down to 4 simple steps to a winning potato harvest. 1. Select and prepare a container

Bug-out bag Off-the-shelf Red Cross preparedness kit . A bug-out bag[1][2] is a portable kit that contains the items one would require to survive for seventy-two hours[3][4] when evacuating from a disaster. The focus is on evacuation, rather than long-term survival, distinguishing the bug-out bag from a survival kit, a boating or aviation emergency kit, or a fixed-site disaster supplies kit. The kits are also popular in the survivalism subculture.[5] The term "bug-out bag" is related to, and possibly derived from, the "bail-out bag" emergency kit many military aviators carry.

How to build a shed, free shed plans, build it yourself! This page contains information on how to build a shed and storage shed plans. Here are a couple of things to consider before you begin this project. Find out before building a storage shed if it will be allowed by zoning regulations. Vegetable and Herb Companion Planting It’s the time of year when you should start thinking about planting your fall vegetables. Actually, we might be a week behind for some vegetables, but if your neck of the woods is anything like mine, summer came late, so hopefully we’re okay. A great way to get a good harvest is to “companion plant.” That is, plant two different types of vegetables in close proximity to one another to create a symbiotic cultural environment. Just as there are beneficial insects that eat destructive insects or improve pollination, there are beneficial combinations of plants that help fight pests or increase yields. Image by lalalaa Dolce Vita

Kentucky Patriots - Starting Your Own Group How to start your own patriot group. So many folks whine about the lack of leadership. They keep looking ... and waiting ... for a leader to emerge.If you're one of those ... try looking in the mirror first. Ask yourself ... What can I do ? Planting Potatoes: 7 Different Methods In April 2010, I planted organic ‘German Butterball’ seed potatoes in the Organic Gardening test plots near Emmaus, Pennsylvania, using the following seven methods. For the five raised planting techniques, I used a mixture of 2 parts topsoil to 1 part compost. Through the course of the growing season, the benefits and drawbacks of each became clear. 1. Hilled Rows Dig straight, shallow trenches, 2 to 3 feet apart, in prepared soil.

Make an emergency preparedness kit- Canadian Red Cross Buy a kit The Canadian Red Cross has developed a comprehensive disaster preparedness kit to help Canadians prepare for short-term power outages or major disasters. This is a great kit to help someone get started. Additional items can be added to make it more personal for you and your family. For suggested items, see the Additional Items list below. Make a kit