Growing Your Own Garlic 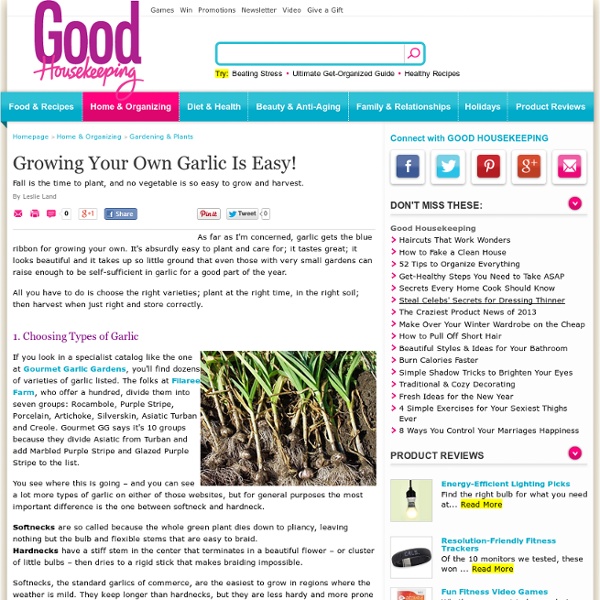 As far as I'm concerned, garlic gets the blue ribbon for growing your own. It's absurdly easy to plant and care for; it tastes great; it looks beautiful and it takes up so little ground that even those with very small gardens can raise enough to be self-sufficient in garlic for a good part of the year. All you have to do is choose the right varieties; plant at the right time, in the right soil; then harvest when just right and store correctly. 1. Choosing Types of Garlic If you look in a specialist catalog like the one at Gourmet Garlic Gardens, you'll find dozens of varieties of garlic listed. You see where this is going – and you can see a lot more types of garlic on either of those websites, but for general purposes the most important difference is the one between softneck and hardneck. Softnecks are so called because the whole green plant dies down to pliancy, leaving nothing but the bulb and flexible stems that are easy to braid. Gardeners in most of the U.S. can try some of both. 2.

How To Plant Cuttings Of Potatoes Overview Potatoes are starchy, tasty root vegetables that are easy to start from cuttings of other potatoes. From French fries to scalloped to baked, potatoes have a wide range of uses in many different types of dishes.

Grey Duck Garlic: How to Grow Big Garlic Top Ten Tips for Giant Sized Allium Bulbs! Do you want to grow prize winning garlic? Would you like to raise really large garlic bulbs? A Perilous Hobby: Vertical Camping Next time you’re passing by a cliff and happen to see a precariously hanging tent with campers inside, don’t be alarmed, it’s just a portable ledge (portaledge): Portaledges — or deployable hanging tents — might seem like a thrill-seeking activity (and it can be), but the idea has actually been around since the 1950s. During this time, rock climbers began to stay overnight on the mountains they were scaling and started looking for convenient niches in the mountain side to make their bed. The first portaledges were used in Yosemite National Park and were non-collapsible cots or hammocks. Climbers would sit on a Navy surplus canvas chair and rest their heads on their dangling rucksacks.

Urban sprawl Urban sprawl or suburban sprawl is a multifaceted concept centered on the expansion of auto-oriented, low-density development. Topics range from the outward spreading of a city and its suburbs, to low-density and auto-dependent development on rural land (which can cause an expansion of the daily urban system), examination of impact of high segregation between residential and commercial uses, and analysis of various design features to determine which may encourage car dependency.[1] The term "sprawl" is most often associated with land use in the English-speaking world; in Continental Europe the term "peri-urbanisation" is often used to denote similar dynamics and phenomena.[citation needed]

Garlic: Fall Planting If you’ve tried growing garlic and your bulbs turned out small, it might be because you planted it in spring. If you want full-sized bulbs bursting with great garlic flavor, plant your garlic in the fall and harvest it the next summer. Garlic is a cold-hardy root veggie, and in most climates, you’ll get much better results with fall planting. 4 Ways to Grow Spinach Edit Article Choosing a VarietyPrepping Your Planting AreaPlanting Your SpinachCaring for Your Spinach Plants Edited by Flickety, Eric, Nathan Wong, Scott Cushman and 2 others

Thy Hand Hath Provided: Braiding Garlic Jamey pulled our garlic the other day. We found that the right time to pull it is when some of the leaves/stems are turning brown, while most are still green. Other years, we waited until the stems were all brown. The bulbs with all brown leaves had more cloves that were already separating from the bulb and tended to sprout faster. If some of the leaves are still green, the bulbs' papery covers are more intact, keeping the cloves from splitting and sprouting as soon. stillphotos Still Photos of Ruby-throated Hummingbirds Page One Page Two Page three Page Four

Good post.. Thank you for sharing by gopi01 Mar 15