How To Start A 1-Acre, Self-Sustaining Homestead 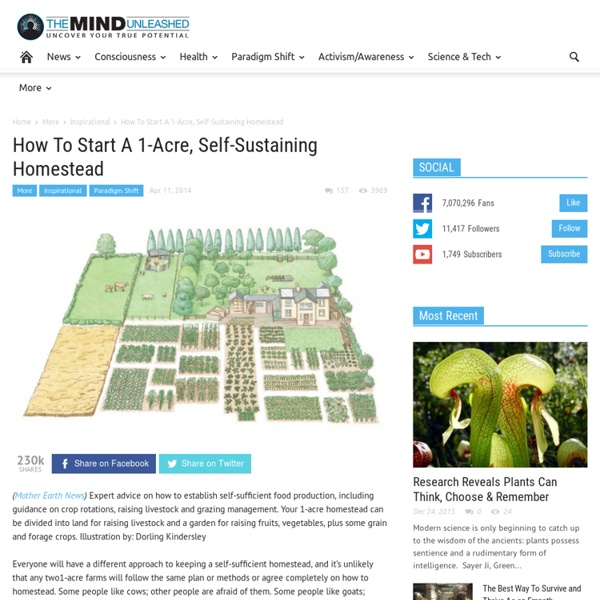 (Mother Earth News) Expert advice on how to establish self-sufficient food production, including guidance on crop rotations, raising livestock and grazing management. Your 1-acre homestead can be divided into land for raising livestock and a garden for raising fruits, vegetables, plus some grain and forage crops. Illustration by: Dorling Kindersley Everyone will have a different approach to keeping a self-sufficient homestead, and it’s unlikely that any two1-acre farms will follow the same plan or methods or agree completely on how to homestead. For myself, on a 1-acre farm of good, well-drained land, I would keep a cow and a goat, a few pigs and maybe a dozen hens. Cow or no cow? On the other hand, the food that you buy in for this family cow will cost you hundreds of dollars each year. Half of your land would be put down to grass, leaving half an acre arable (not allowing for the land on which the house and other buildings stand). An ideal crop rotation might go something like this:

A sweet lesson on patience. A NYC Taxi driver wrote: I arrived at the… A sweet lesson on patience. A NYC Taxi driver wrote: I arrived at the address and honked the horn. After waiting a few minutes I honked again. Since this was going to be my last ride of my shift I thought about just driving away, but instead I put the car in park and walked up to the door and knocked.. 'Just a minute', answered a frail, elderly voice. After a long pause, the door opened. By her side was a small nylon suitcase. There were no clocks on the walls, no knickknacks or utensils on the counters. 'Would you carry my bag out to the car?' She took my arm and we walked slowly toward the curb. She kept thanking me for my kindness. 'Oh, you're such a good boy, she said. 'It's not the shortest way,' I answered quickly.. 'Oh, I don't mind,' she said. I looked in the rear-view mirror. 'What route would you like me to take?' For the next two hours, we drove through the city. Two orderlies came out to the cab as soon as we pulled up. 'How much do I owe you?' 'Nothing,' I said

No Yard? No Problem: 5 DIY Garden Projects For People Who Don’t Have Space For A Garden Gardening can be such a rewarding hobby for you, your family, your neighbours and some friends as well as there is much to benefit from. Aside from being rewarding for your mind and soul, it is also physically rewarding because you actually get to harvest the “fruits of your labor.” Being able to grow your own food means that you have COMPLETE control over what you are putting into you and your family’s bodies. You get to pick the seeds, the soil and the water that is being used to grow your fruits and veggies. That means completely organic, GMO free, fresh food could be right at your fingertips! The majority of the produce in your local grocery store has travelled for a long time to get from where it was harvested to your grocery store and then eventually, your kitchen table. To be able to grow even some of your own fresh fruits and vegetables ensures that you are getting quality, wholesome, nutrient rich food, and you are doing your part for the environment as well. 1. 2. 3. 4. 5.

What These 11 Animals Did Made Me Cry A Bucket Of Tears. The Most Touching Thing I’ve Ever Seen. If you’ve ever doubted that animals have souls and are capable of caring on a deep level, this is going to change your mind. Here are 11 examples of animals being the beautiful creatures that we know they are – you might not need tissues, but it wouldn’t hurt to grab one first. 1. She said, “I began to choke and sank even lower and I thought that was it for me – I was dead. 2. One surviving family member of a resident that passed with Oscar by his side said, “Oscar’s presence gave a sense of completion and contentment. 3. 4. 5. 6. 7. 8. 9. 10. 11. Now if you’ll excuse me, I need to clean my face up. Share these stories with others. Source. Comments comments

166 Documentaries To Expand Your Consciousness Here is a list of over 100 documentaries you can watch for free online. They are about Science, Consciousness, ETs, you name it. It’s a smorgasbord of fascinating subjects to learn about. If you find a dead link please let us know and we will find another to replace it. Enjoy! 1. This list will never be complete! Featured image credits: Justin Totemical Art

8 Vegetables that you can regrow again and again. 1. Scallions(Spring onion) You can regrow scallions by leaving an inch attached to the roots and place them in a small glass with a little water in a well-lit room. 2. When garlic begins to sprout, you can put them in a glass with a little water and grow garlic sprouts. 3. Bok choy can be regrown by placing the root end in water in a well-lit area. 4. Put carrot tops in a dish with a little water. 5. Put clippings from basil with 3 to 4-inch stems in a glass of water and place it in direct sunlight. 6. Cut off the base of the celery and place it in a saucer or shallow bowl of warm water in the sun. 7. Put romaine lettuce stumps in a 1/2 inch of water. 8. The stems of cilantro will grown when placed in a glass of water.

Wikileaks Cables Confirm Existence of Extraterrestrial Life We're creating viewer supported news. Become a member! We’re already halfway through 2013 and the world continues to wake up to the fact that we are not alone in the universe. Just this year, we’ve seen a tremendous step forward regarding UFO disclosure. In early May, researchers, activists, political leaders, and high ranking military/agency personnel from around the world testified to the reality of the UFO/extraterrestrial phenomenon in front of several former United States members of Congress. To watch an interview with former 2008 presidential candidate and ex-congressman Mike Gravel (who participated in the hearings), click here. For more CE articles on the subject of UFOs and extraterrestrials, click HERE. Prior to the recent hearing on UFOs and extraterrestrial life, we’ve had explosive statements made by NASA astronauts and professors. It’s now a fact that UFOs are tracked on radar, performing maneuvers that defy our current understanding of physics. And another: – Julian Assange

How To Build A $50 Greenhouse In Your Yard – Free Plans! It is time that we all became a little more self reliant? I think so. When we look at the fact that the mainstream idea of food production is becoming more and more out of touch with nature, it becomes clear that we need to begin thinking about growing our own food. While we can take the organic route at the supermarket, sometimes the costs can be high and in the end we still don’t quite know where our food is coming from. So what can we do to grow our own food? Solar-Powered 3D Printer Turns Desert Sand Into Glass Bowls And Sculptures The sun’s rays can be harnessed to power everything from homes to gadgets, but one graduate student is using the sun to create a super-printer capable of printing elaborate glassware. Markus Kayser took his graduate project all the way to the sands of the Sahara in Egypt to create his innovative idea dubbed the ‘Solar Sinter’. The incredible design uses a 3D digital printer and the sun’s rays to turn the sand into incredible glass bowls and sculptures that are out of this world. The Solar Sinter is made up of seven stations: a photovoltaic panel, the focal point for drawing the sun’s rays, a sun tracker, fresnel lens (for magnifying the rays), a battery, controlling electronics, and finally a silver tent dubbed the “office,” where Kayser can shield himself from the hot sun, while monitoring the process. Dragging the mini-station far into the desert, Kayser utilizes the abundant natural energy. Credits: Written by Lori Zimmer of www.inhabitat.com

Train in Alabama oil spill was carrying 2.7 million gallons of crude - Los Angeles Times A train that derailed and exploded in rural Alabama was hauling 2.7 million gallons of crude oil, according to officials. The 90-car train was crossing a timber trestle above a wetland near Aliceville late Thursday night when approximately 25 rail cars and two locomotives derailed, spilling crude oil into the surrounding wetlands and igniting a fire that was still burning Saturday. Each of the 90 cars was carrying 30,000 gallons of oil, said Bill Jasper, president of the rail company Genesee & Wyoming at a press briefing Friday night. It’s unclear, though, how much oil was spilled because some of the cars have yet to be removed from the marsh. “Most of the cars did not spill all of the product that was inside it,” Don Hartley, a regional coordinator for the Alabama Emergency Management Agency, told the Los Angeles Times. Emergency responders have to wait until the fire has burned out, Hartley said. The cause of the crash is under investigation, and will probably take weeks to determine.

This Little Weed is one of the Most Useful Medicines on the Planet You’ve stepped on it, ignored it, and tried to eradicate it from your lawn. However, this innocuous little weed is one of the most useful medicines on the planet, just begging to be harvested. There are two major types of plantain in BC, Canada: Lance and Broadleaf. Generally, all 200-plus varieties of plantain yield the same results. It grows especially well in poor, rocky soil (such as driveways) and is often seen alongside dandelion. More often than not, you will see plantain growing in gravel pits and construction sites as nature seeks to regenerate the soil. Plantain has often been the go-to remedy for hikers plagued by mosquitos. Plantain is renowned for its healing effect on the digestive system. Because plantain is a gentle expectorant and high in silica, an infusion can be helpful for lung problems, coughs, and colds. Resources: - Prescription for Herbal Healing: 2nd Edition – Phyllis A. About The Author

10 Ways To Keep Your Diet GMO-Free Share by Julie Taylor – Upwave.com It seems like everyone is talking about the dangers of genetically modified organisms (GMOs) these days. But what are GMOs exactly? They’re the result of a laboratory process that inserts genes from one species into the genes of another to obtain a desired trait or characteristic (e.g., fast-growing salmon). 1. 2. 3. 4. 5. 6. 7. 8. 9. 10. Does all this GMO talk stress you out?

These 50 Photos From The Past Are Shocking And Hilarious. I Can't Believe How Things Have Changed... These photographers may have never known the significance of the pictures they took and that millions would be marveling at them in the future. From thousands of images, I chose these to give us a rare and fascinating look at how different (and similar) life used to be. hyperallergic.com Robert Cornelius took this photo outside the store his family owned. This may very well be the most kings ever photographed at once. Suits were not allowed to end more than 6 inches above the knee. The Afghanistan government was shifting towards democracy in the 1950s and 60s before the Taliban took over. This Japanese machine meows times per minute to scare away rats and mice. Although we did everything differently back then, these photos also show that deep down, raw human spirit never changes. And I can only imagine what photos we're taking in 2014 will be studied 200 years in the future...