The urban guide to being self sufficient'ish 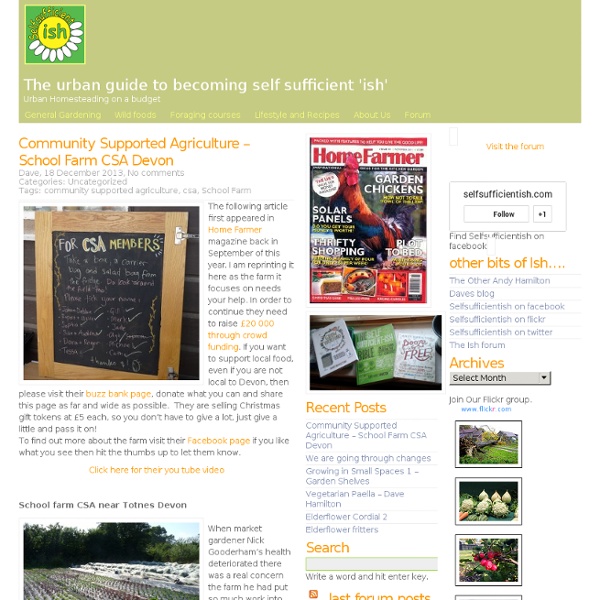 This is an easy recipe to follow and creates a delightful, if not usual tasting beer. It is very cheap to make and follows a traditionally english recipe. Before hops were widely used in the 17th century all sorts of plant were used to flavor the ale including nettles. Ingredients 900grams (2lb) young nettle tops 3.8lts (1 gallon) of water 230 grams (8oz) of sugar, brown or demarrara sugar works best. 7.5 grams (0.25oz) of fresh yeast small piece of toast 7.5 grams (0.25oz) of ground ginger Method Boil the nettle tops in the water for half an hour (you will need a very large pan for this or preferably a cauldron). Keeping the mixture, strain and add sugar, stirring to dissolve. Spread the yeast onto the toast and float on the surface of the nettle liquid. Strain again and put into clean, strong screw top beer bottles, or sealable wine bottles (I used plastic bottles and it still worked). Growing in a small space tests even the greenest of fingers. False Economy Small Space and small budget

16 Foods That’ll Re-Grow from Kitchen Scraps By Andy Whiteley Co-Founder of Wake Up World Looking for a healthy way to get more from your garden? Like to know your food is free of the pesticides and other nasties that are often sprayed on commercial crops? Re-growing food from your kitchen scraps is a good way to do it! There’s nothing like eating your own home- grown vegies, and there are heaps of different foods that will re- grow from the scrap pieces that you’d normally throw out or put into your compost bin. It’s fun. Just remember … the quality of the “parent” vegetable scrap will help to determine the quality of the re-growth. Leeks, Scallions, Spring Onions and Fennel You can either use the white root end of a vegetable that you have already cut, or buy a handful of new vegetables to use specifically for growing. Simply place the white root end in a glass jar with a little water, and leave it in a sunny position. Lemongrass Lemongrass grows just like any other grass. Within a week or so, new growth will start to appear. Ginger

How to Build a Square Foot Garden Update! Check out our new Square Foot Gardening Infographic for even more tips, diagrams, a plant list and much more. I recently stumbled upon a book (All New Square Foot Gardening: Grow More in Less Space! I know just enough about gardening to know that I am not very good at it, and that it is a lot of work. What is Square Foot Gardening? The idea behind square foot gardening is that you can plant fruits, vegetables and flowers in raised beds, above infertile soil and even out of the reach of pets. Materials Needed to Set Up a Square Foot Garden Material costs are variable, depending on the size of garden you plan to build. (1) Sheet untreated plywood – $0.00 (leftover scrap from a previous home improvement project) (2) 2x6x8 pieces of untreated lumber – $7.38 Don’t get treated lumber because treatments can seep into the soil and contaminate your planting area. (8) #6 x 1″ Wood Screws – $0.98 These were used to anchor the nylon line to create a grid system for the 1×1 planting plots.

ferns Vertical Gardening : Milkbottles As enviroschools, recycling and re-using is part of what we do on a daily basis. Here is what we did with our empty milk bottles and homegrown seedlings from our potting shed to liven up our tin shed wall at Tawa Montessori ... * With thanks to Juliet from "I am a teacher, get me OUTSIDE here!" and the Creative Star Learning Company for the idea! - Anja flowering plant Vertical Gardening : Hanging Bottles Photos: Rosenbaum. Brazilian design studio Rosenbaum collaborates with TV show Caldeirao do Huck in a segment called Lar doce lar (Home Sweet Home), which helps families in need re-designing their homes to improve their lives and self-esteem. In its latest work for a family living in the outskirts of Sao Paulo, the firm included this neat vertical garden made from recycled PET bottles. Although the idea is cool in itself, it's so much better knowing that it's part of a project to improve the lives of three women (mother and two daughters) that live in a one bedroom home with an income of 200 Reais (130 US Dollars) a month. Putting together an urban farm was not the designer's whim either: the women already had an eco conscience and grew in small containers made from recovered food packaging. The arrangement is of course thought for vegetables that don't take a lot of space to grow, like spices and medicinal herbs.

Tropical Rainforest Plants Tropical rainforest plants grow in more obvious layers than temperate rainforest plants. Like in all tropical rainforests, there are the tall trees, vines and epiphytes, shorter trees and tree ferns, and orchids and other smaller plants on the forest floor. Some more famous examples are the bird of paradise flower, the giant lilys, and the carnivorous pitcher plants. © Poster by AllPosters. Click on thumbnail to buy Africa and Madagascar IslandAfrican rainforests are the second largest in the world after Amazon. There are evergreen, semi-evergreen, deciduous and semi-deciduous forests. Asian Tropical Rainforest PlantsAsian rainforests are smaller than those of South America and Africa. Oceania Australasia Rainforest FloraIn Oceania, tropical rainforests are only found in New Guinea, northern Australia, and some Pacific Islands. Custom Search

10 Simple, Cheap Home Gardening Innovations to Set You on the Path to Food Independence Alex Pietrowski, Staff WriterWaking Times The issue of food quality and food independence is of critical importance these days, and people are recognizing just how easy and fun it is to grow your own food at home. When renegade gardener Ron Finley said, “growing your own food is like printing money,” he was remarking on the revolutionary nature of re-establishing control over your health and your pocket book as a means of subverting the exploitative and unhealthy food systems that encourage the over-consumption of processed and fast foods. Thanks to the internet, the availability of parts and materials, and good old-fashioned ingenuity, there is a wide range of in-home, and in-apartment, gardening systems that are easy to construct and maintain, and that can provide nutritious, organic, and low-cost food for you and your family. Aquaponics Read: Aquaponic Gardening: A Step-By-Step Guide to Raising Vegetables and Fish Together Vertical Gardening Simple Greenhouse Designs Composting

Neanderthals died out earlier than previously thought, new evidence suggests Direct dating of a fossil of a Neanderthal infant suggests that Neanderthals probably died out earlier than previously thought. Researchers have dated a Neanderthal fossil discovered in a significant cave site in Russia in the northern Caucasus, and found it to be 10,000 years older than previous research had suggested. This new evidence throws into doubt the theory that Neanderthals and modern humans interacted for thousands of years. Instead, the researchers believe any co-existence between Neanderthals and modern humans is likely to have been much more restricted, perhaps a few hundred years. The research, directed by the University of Oxford and University College Cork in collaboration with the Laboratory of Prehistory at St Petersburg, Russia, and funded by Science Foundation Ireland was recently published in PNAS Online Early Edition. The new dating evidence throws new light on when the Neanderthals became extinct and why.

European Neanderthals were on the verge of extinction even before the arrival of modern humans New findings from an international team of researchers show that most Neanderthals in Europe died off around 50,000 years ago. The previously held view of a Europe populated by a stable Neanderthal population for hundreds of thousands of years up until modern humans arrived must therefore be revised. This new perspective on the Neanderthals comes from a study of ancient DNA published February 25 in Molecular Biology and Evolution. The results indicate that most Neanderthals in Europe died off as early as 50,000 years ago. After that, a small group of Neanderthals recolonised central and western Europe, where they survived for another 10,000 years before modern humans entered the picture. The study is the result of an international project led by Swedish and Spanish researchers in Uppsala, Stockholm and Madrid. The results presented in the study are based entirely on severely degraded DNA, and the analyses have therefore required both advanced laboratory and computational methods.

Bunnies implicated in the demise of Neanderthals - 27 February 2013 BLAME it on the bunnies. The debate over what Neanderthals ate, and how it may have led to their demise, has turned to rabbits. Which, it is now claimed, they did not feast on. Signs that our extinct cousins hunted dolphins and seals were presented in 2008 as evidence of their sophistication. Now, John Fa of the Durrell Wildlife Conservation Trust in Trinity, Jersey, says the remains in caves around Europe became dominated by rabbits rather than large game around the time Neanderthals went extinct (Journal of Human Evolution, doi.org/kkn). It's not clear why they would have had more trouble changing prey, says Fa.

Handaxe design reveals distinct Neanderthal cultures -- ScienceDaily A study by a postgraduate researcher at the University of Southampton has found that Neanderthals were more culturally complex than previously acknowledged. Two cultural traditions existed among Neanderthals living in what is now northern Europe between 115,000 to 35,000 years ago. Dr Karen Ruebens from the Centre for the Archaeology of Human Origins (CAHO) and funded by the Arts and Humanities Research Council (AHRC) examined the design of 1,300 stone tools originating from 80 Neanderthal sites in five European countries; France, Germany, Belgium, Britain and the Netherlands. Dr Ruebens' investigations uncovered new evidence that two separate handaxe traditions or designs existed -- one in a region now spanning south-western France and Britain -- the other in Germany and further to the East. In addition, she found an area covering modern day Belgium and the Netherlands that demonstrates a transition between the two. "Making stone tools was not merely an opportunistic task.