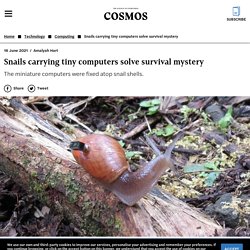 The Society Islands of the South Pacific, a lush tropical archipelago forming part of French Polynesia, were once home to at least 61 species of tree snail. But after the giant African land snail was introduce to the islands it rapidly became a pest, so agricultural scientists introduced the rosy wolf snail in 1974 to cull the land snail population. This decision made the native tree snails an easy target, and most disappeared, snubbing out their unique evolutionary stories. One plucky species of tree snail however, Partula hyalina, survived, leading scientists to wonder why.

The Michigan Micro Mote (M3), considered the world’s smallest complete computer, was announced in 2014 by a team co-led by David Blaauw, Professor of Electrical Engineering and Computer Science. No more cuddly selfies with our ape cousins, top conservation body warns scientists. The global authority on wildlife protection wants scientists to quit cuddling monkeys on Instagram, holding hands with orangutans in films, and palling around with chimpanzees in publicity photos. 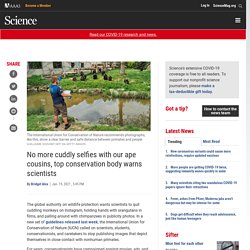 In a new set of guidelines released last week, the International Union for Conservation of Nature (IUCN) called on scientists, students, conservationists, and caretakers to stop publishing images that depict themselves in close contact with nonhuman primates. Scientists Discover Brown Snakes Employing 'Lasso Locomotion' to Climb Vertically to Top of Metal Cylinder. How frigid lizards falling from trees revealed rising cold tolerance. After the coldest night in south Florida in a decade, lizards were dropping out of palm trees, landing legs up. 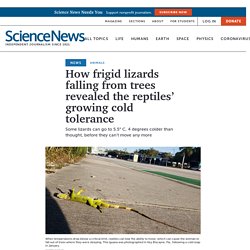 The scientists who raced to investigate the fallen reptiles have now found that, despite such graceless falls, some of these tropical, cold-blooded creatures are actually more resilient to cold than previously thought. The finding sheds light on how some species might respond to extreme weather events caused by human-caused climate change (SN: 12/10/19).

Although climate change is expected to include gradual warming globally, scientists think that extreme events such as heat waves, cold snaps, droughts and torrential downpours could also grow in number and strength over time. The idea for the new study was born after evolutionary ecologist James Stroud received a photo of a roughly 60-centimeter-long iguana on its back on a sidewalk from a friend in Key Biscayne, an island town south of Miami. The previous night, temperatures dropped to just under 4.4° Celsius (40° Fahrenheit). 'Seaborne invasion' of wild boar swamps mystical Malaysian island. A mystical Malaysian island is grappling with a “seaborne invasion” of wild boar, which some believe are swimming kilometres across one of the world’s busiest shipping lanes before destroying crops. 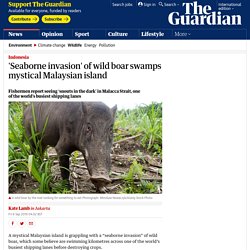 “The seaborne invasion of wild boars leaves us in despair as the animal population is increasing,” said Norhizam Hassan Baktee, chairman of the Malacca agriculture committee, of the influx on to Pulau Besar. The creatures are thought to be from Indonesia, which would mean navigating the busy Malacca Strait, a 550-mile-long (900km) stretch of water between Malaysia and Indonesia that is only a few kilometres wide at its narrowest point. A Python Swallowed a Crocodile Whole—and a Photographer Was There to Capture It All. Between the itching and the welts and the fears of mosquito-borne viruses, it's easy to forget that mosquitoes are a wonder of evolution, and that maybe they don't get a fair shake from us. 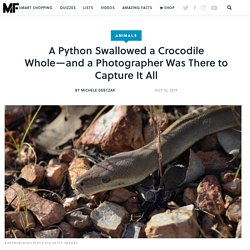 Of more than 3000 known species, only 80 actually bite people, and at least one eats other mosquitoes for us. They grow from egg to adult in just five days, begin mating within minutes of hatching, and possess, by way of their stinging mouthparts, some of the coolest appendages in the animal kingdom. 1. Mosquitoes are excellent flyers in bad weather. The average raindrop is 50 times heavier than the average mosquito, yet they buzz around in the rain with no problems. Scientists Find Chernobyl Full of Thriving Animals. The word Chernobyl likely conjures up eerie images of buildings long-abandoned by residents who fled the nuclear fallout. 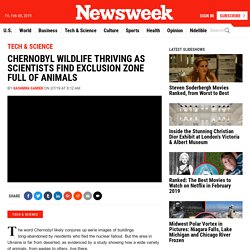 But the area in Ukraine is far from deserted, as evidenced by a study showing how a wide variety of animals, from eagles to otters, live there. After the Chernobyl power plant exploded in 1986, causing what is generally regarded as the worst nuclear disaster in history, humans abandoned an area spanning 1,000 square miles north of Kiev, known as the exclusion zone. Some prehistoric horses were homebodies. Iguanas cold-stunned, but probably not dead. South Florida has seen iguanas proliferate in the past few years with abnormally warm temperatures. 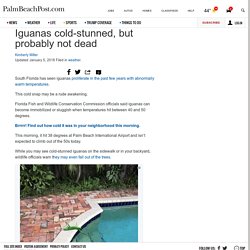 This cold snap may be a rude awakening. Florida Fish and Wildlife Conservation Commission officials said iguanas can become immobilized or sluggish when temperatures hit between 40 and 50 degrees. Factory Farm Chicken Rounds Out Miserable Existence By Going Bad In Man’s Refrigerator. Indonesian man found dead inside giant python. Holy Crab! Fearless Australian Poses With Massive Coconut Crab. Radioactive Wild Boars Roam Fukushima, Japan. Thanks to this morning's Boston Globe, we have a new Lead Story in our rapidly expanding file entitled, If It Ain't One Damn Thing, It's Another. 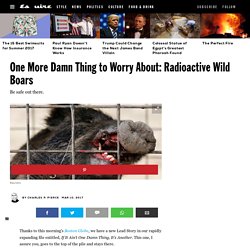 This one, I assure you, goes to the top of the pile and stays there. Hundreds of toxic wild boars have been roaming across northern Japan, where the meltdown of the Fukushima nuclear plant six years ago forced thousands of residents to desert their homes, pets, and livestock. Some animals, like cattle, were left to rot in their pens. As Japan prepares to lift some evacuation orders on four towns within the more than 12-mile exclusion zone around the Fukushima plant this month, officials are struggling to clear out the contaminated boars. Wild boar meat is a delicacy in northern Japan, but animals slaughtered since the disaster are too contaminated to eat. Advertisement - Continue Reading Below Holy mother of god. Log In - New York Times. Bothrops insularis - Wikipedia. Physical morphology[edit] Size and appearance[edit] On average B. insularis grows to a length of 70 cm (28 in) and is known to reach 118 cm (46 in).[2] The color pattern consists of a pale yellowish-brown ground color, overlaid with a series of dorsal blotches that may be triangular or quadrangular, broad or narrow, and alternating or opposite along the dorsal median. 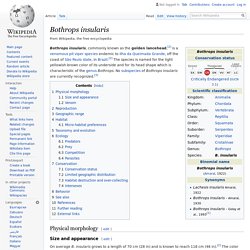 In captivity, this yellowish color often becomes darker, which may be the result of poor circulation caused by ineffective thermoregulation.[4] A banded pattern results when the pattern is opposite. Photos: This Python Chowed Down on 3 Deer. New evidence that early chimps and bonobos interbred. New DNA analyses show that chimpanzees and bonobos were more than just friends in the past. 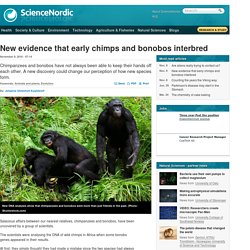 (Photo: Shutterstock.com) Salacious affairs between our nearest relatives, chimpanzees and bonobos, have been uncovered by a group of scientists. The scientists were analysing the DNA of wild chimps in Africa when some bonobo genes appeared in their results. At first, they simply thought they had made a mistake since the two species had always been physically separated by the Congo River. “When we first saw bonobo genes in the chimpanzee genome, we thought ‘no, no, no,’” says co-author Christina Hvilsom from the Center for Zoo and Wild Animal Health at Copenhagen Zoo, Denmark.

The new results are published in the journal Science. Scientists Say Apes Can Predict Human Mistakes. Everybody’s got that one friend who just keeps making terrible choices. You can see the consequences a mile off; unfortunately, they can’t, and you know it. This concept—that we can anticipate other people’s beliefs or behaviors, even when we know they’re mistaken—seems uniquely human.

Now Japanese researchers say apes can do it, too, albeit on a much simpler scale. They published their findings in the journal Science. Giant tortoise. Giant tortoises are characteristic reptiles that are found on two groups of tropical islands: the Aldabra Atoll in Seychelles and the Galapagos Islands in Ecuador (a population at the Mascarene Islands was exterminated by the 1900s) .

This phenomenon of excessive growth is known as islands gigantism or insular gigantism. It occurs when the size of the animals that are isolated on an islands increases dramatically in comparison to their mainland relatives. History[edit] Absurd Creature of the Week: The Mystery of Solenodon, the Mammal That Bites Like a Snake. You’re a mammal, so pat yourself on the back—no, not you, lizard people from outer space posing as high-ranking members of the US government. Mammals have got it made: Fur to keep you warm, milk to nourish your young, relatively big brains to keep you not dumb. What you don’t have, though, is a venomous bite … unless you are in fact a lizard person from outer space.

Pitbulls used to be considered the perfect ‘nanny dogs’ for children — until the media turned them into monsters. For most of the 114 years since the American pitbull terrier was first recognized by the United Kennel Club, the breed was rightly seen as the perfect “nanny dog” for children because of its friendly nature, loyalty and stability. As the ASPCA notes, the pitbulls were “once considered especially non-aggressive to people.” Today, as any owner of a “pitbull-type” dog* can attest, parents often recoil in horror when they spot one of these animals, pulling their children close as if to protect them from a marauding werewolf. The Intelligent Life of the City Raccoon - Issue 18: Genius.

Toronto resident Simon Treadwell wheeled a garbage bin onto a snow-bound lot next to his property one evening this past winter. Inside the bin was a smelly mixture of wet and dry cat food, sardines, and fried chicken. Snake Insistently Plays Dead, Is a Giant Ham About It. Legless geckos slither using skin ridges. Apes can relive their past through ’mental time travel’ Humans are no longer the only animal capable of recalling own experiences from the past. Water Trapped For 1.5 Billion Years Could Hold Ancient Life. This map, from the United States Geological Survey, shows the age of bedrock in different regions of North America. Scientists found ancient water in bedrock north of Lake Superior. This region, colored red, was formed more than 2.5 billion years ago.

A Different Kind of Smart. How to Raise Backyard Chickens. Long Cloaked in Mystery, Owls Start Coming Into Their Own. 12 Most Amazing Exotic Birds. Fresh Clues In Dinosaur Whodunit Point To Asteroid. Some 66 million years ago, about 75 percent of species on Earth disappeared. It wasn't just dinosaurs but most large mammals, fish, birds and plankton. Scientists have known this for a long time just from looking at the fossil record. Pitbulls Used to Be Considered the Perfect "Nanny Dogs" for Children. January 30, 2013 | New world map of animal life. Biogeography involves the mapping and scientific explanation of the spread of life on Earth.

Do dogs see what’s happening on TV? The Fuzzy Face of Climate Change - Tiger dating: can tigers find love in faeces? Geese All Flying To Andy García's House For Winter. Humans have added new bones to the pig. Undead-End: Fungus That Controls Zombie-Ants Has Own Fungal Stalker. Elephants have 'special alarm call' to warn of bees. Elephant personalities revealed by scientists.