Exploration Flight Test 1. Overview[edit] The spacecraft will remain attached to the Delta IV's Upper Stage until reentry begins and will rely on internal batteries for power rather than photovoltaic arrays, which will not be installed.[3] The flight is intended to test various Orion systems, including avionics, heat shielding and parachutes prior to its debut launch aboard the Space Launch System, currently scheduled for late 2017.[4] EFT-1 Orion is being built by Lockheed Martin.[5] On June 22, 2012, the final welds of the EFT-1 Orion were completed at the Michoud Assembly Facility in New Orleans, Louisiana.[5] It was then transported to Kennedy Space Center's Operations and Checkout Building, which is where the remainder of the spacecraft will be completed.[6] Data gathered from the test flight will be analyzed by the Critical Design Review (CDR) in April, 2015.[7] After splashdown in the Pacific Ocean, crews will recover the EFT-1 Orion crew vehicle and outfit the capsule for an ascent abort test.[8] 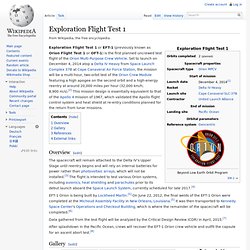 Exploration Mission 1. Overview[edit] The Block 1 version of SLS used on this mission will consist of two five-segment Solid Rocket Boosters, four RS-25D engines built for the Space Shuttle program and an Interim Cryogenic Propulsion Stage.[6] EM-1 is intended to demonstrate the integrated spacecraft systems prior to a crewed flight, and in addition, test a high speed reentry (11 km/s) on Orion's thermal protection system.[6] On January 16, 2013, NASA announced that the European Space Agency would build Orion's service module based on its Automated Transfer Vehicle, so the flight could also be regarded as a test of ESA hardware as well as American, and of how the ESA components interact with the American Orion components.[7] The Exploration Flight Test 1 (EFT-1) flight article was consciously constructed in a way that if all the missing components (seats, life support systems) were added, it would not meet the mass target. 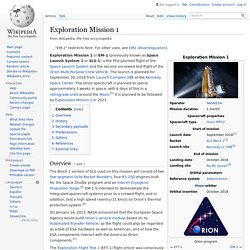 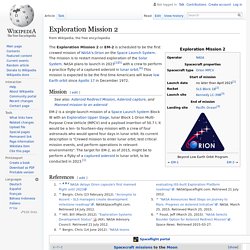 It would be a ten- to fourteen-day mission with a crew of four astronauts who would spend four days in lunar orbit. Its current description is "Crewed mission to enter lunar orbit, test critical mission events, and perform operations in relevant environments". 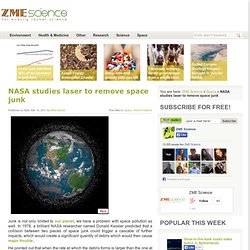 In 1978, a brilliant NASA researcher named Donald Kessler predicted that a collision between two pieces of space junk could trigger a cascade of further impacts, which would create a significant quantity of debris which would then cause major trouble. He pointed out that when the rate at which the debris forms is larger than the one at which it de-orbits, the Earth would be permanently surrounded by belts of junk, a scenario which is now known as the Kessler syndrome. By some estimates, the Kessler syndrome is already upon us, or very close to it. In January 2009, a collision between the Iridium 33 and Cosmos 2251 satellites created exactly this type of scenario, and two years later, the Chinese intentionally destroyed one of their own satellites to test an anti-satellite weapon.

101955 Bennu. 101955 Bennu has a mean diameter of approximately 493 meters and has been observed extensively with the Arecibo Observatory Planetary Radar and the Goldstone Deep Space Network.[2][3][9] 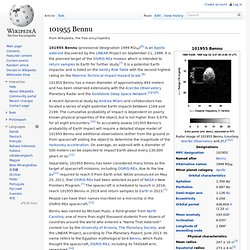 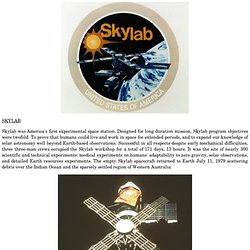 Designed for long duration mission, Skylab program objectives were twofold: To prove that humans could live and work in space for extended periods, and to expand our knowledge of solar astronomy well beyond Earth-based observations. Successful in all respects despite early mechanical difficulties, three three-man crews occupied the Skylab workshop for a total of 171 days, 13 hours. It was the site of nearly 300 scientific and technical experiments: medical experiments on humans' adaptability to zero gravity, solar observations, and detailed Earth resources experiments.

The empty Skylab spacecraft returned to Earth July 11, 1979 scattering debris over the Indian Ocean and the sparsely settled region of Western Australia. Skylab made extensive use of Saturn and Apollo equipment. When the meteoroid shield ripped loose, it disturbed the mounting of workshop solar array "wing" two and caused it to partially deploy. Salyut 1: Salyut 3: HubbleSite - Out of the ordinary...out of this world. 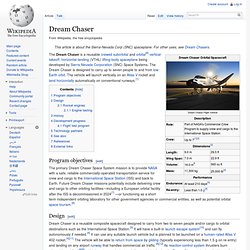 The Dream Chaser is designed to carry up to seven people to and from low Earth orbit. The vehicle will launch vertically on an Atlas V rocket and land horizontally automatically on conventional runways.[1] Hubble. Hubble News. Nasa comet hopper. NASA's Next Mission Will Be a New Mars Lander, a Comet Hopper, or a Lunar Sailboat.