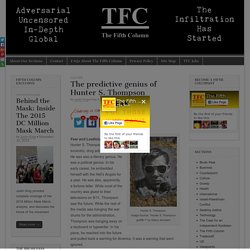 Thompson.Image Source: “Hunter S. Thompson graffiti 1” by thierry ehrmann Fear and Loathing, US (TFC) – Hunter S. Thompson was a wild, eccentric, drug addled, lunatic. He was also a literary genius. What was that warning? The towers are gone now, reduced to bloody rubble, along with all hopes for Peace in Our Time, in the United States or any other country.

If you want to read the whole piece, ESPN was smart enough to preserve the whole thing. ESPN.com: Page 2 : Fear & Loathing in America. By Hunter S. 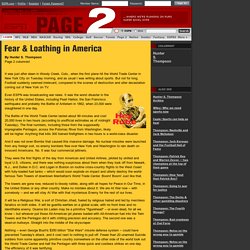 ThompsonPage 2 columnist It was just after dawn in Woody Creek, Colo., when the first plane hit the World Trade Center in New York City on Tuesday morning, and as usual I was writing about sports. But not for long. Football suddenly seemed irrelevant, compared to the scenes of destruction and utter devastation coming out of New York on TV. Even ESPN was broadcasting war news. The Nightmare Since 9/11 — 14 Years of War, Torture and Kidnappings. Five Hard Facts Americans Forgot About 9/11 After Being Reminded Every Year t... On this, the 14th anniversary of one of the most tragic days in recent American history, U.S. citizens will be bombarded with patriotic imagery, messages, and the oft-repeated 9/11 slogan of “Never Forget.” 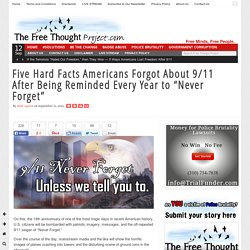 Over the course of the day, mainstream media and the like will show the horrific images of planes crashing into towers and the disturbing scene of ground zero in the aftermath. In the midst of all the grieving, the flag waving, and the speeches from opportunistic presidential hopefuls, there will be an uncomfortable moment of silence. This silence, however, will not be in remembrance of the victims that day, but rather the complete lack of coverage given to the unanswered questions and suspicious facts surrounding that fateful morning. A slew of unprovable conspiracy theories is associated with the events leading up to and occurring on Tuesday, September 11, 2001. However, the Free Thought Project does not delve into such speculation. The Real Reason Behind The 911 Terror Is Control Over Global Collateral Accounts. September 13, 2011 [updated 9/14/2011, 6:17pm] Although a decade of research has proven a high level cabal at the top of the Western power structure was behind the 911 terror attacks, few realize the attack was an esoteric battle in a war for control of the global financial system. 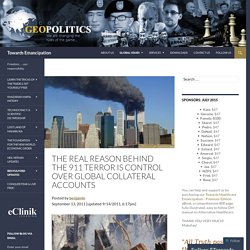 Fewer still realize the 311 nuclear tsunami attack against Japan was also part of this battle. However, a critical mass of military, law-enforcement, banking and other officials has identified and is about to arrest the culprits behind these and other attacks. The search for the ultimate culprits led to something known as the global collateral accounts and a high level group of conspirators that illegally took them over. These accounts are backed by the pooled assets of many of the world’s governments and were meant to be used to finance peaceful development. According to a US intelligence group that has been on this case for some time, the top cabalists include George Bushes Jr. When U.S. Source »» source »» Trutherbot sur Twitter : "... I'll tower 7. Stay puff. Lucky larry. 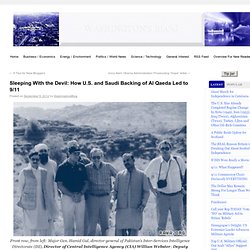 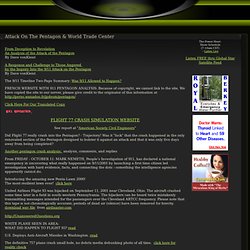 FRENCH WEBSITE WITH 911 PENTAGON ANALYSIS: Because of copyright, we cannot link to the site, We have copied the site to our server, please give credit to the originator of this information at Click Here For Our Translated Copy See report at "American Society Civil Engineers" Did Flight 77 really crash into the Pentagon? Another pentagon crash analysis: analysis, comments, and replies From FRIDAY - OCTOBER 11: MARK NEMETH, People's Investigation of 911, has declared a national emergency in uncovering what really happened on 9/11/2001 by launching a first time citizen led investigation with hard evidence, facts, and connecting the dots --something the intelligence agencies apparently cannot do. U.S. Sneak Preview - 911 Pentagon Tapes. Conspiracy Theory with Jesse Ventura The 9/11 Pentagon Cover up. New 911 Truth Video Can Not Be Debunked. Loose Change 9/11: An American Coup.