Richard Gage: "We are pushing a very big rock up a very big hill" #AE911Truth. 9/11: THE SENSIBLE DOUBT - [Mini-documentary about 9/11] Lars Schall "Informed 9/11 Terror Trading" John Kerry Says WTC 7 Brought Down In Controlled Fashion. 2,500 Ground Zero Workers Have Cancer. (Susan Edelman) More than 2,500 Ground Zero rescuers and responders have come down with cancer, and a growing number are seeking compensation for their illnesses, The Post has learned. 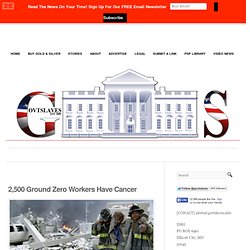 The grim toll has skyrocketed from the 1,140 cancer cases reported last year. In its latest tally, the World Trade Center Health Program at Mount Sinai Hospital counts 1,655 responders with cancer among the 37,000 cops, hard hats, sanitation workers, other city employees and volunteers it monitors, officials told The Post. The tragic sum rises to 2,518 when firefighters and EMTs are added. The Global Drug Meta-Group: Drugs, Managed Violence, and the Russian 9/11. Home By Peter Dale Scott (18,734 words) 10/29/05 See also A Ballad of Drugs and 9/11 (I wish to acknowledge the invaluable assistance in the preparation of this essay from N, a Russian who for the time being prefers to remain anonymous.) 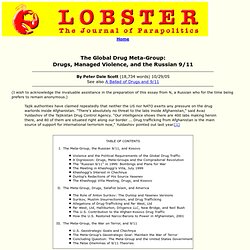 I. 9/11's Trainer in Terrorism Was an FBI Informant. If I had an hour, I would talk to you about how the 9/11 Report failed to reconcile Dick Cheney's conflicting accounts, which cannot all be true, of what he did on the morning of 9/11 in the bunker beneath the White House. 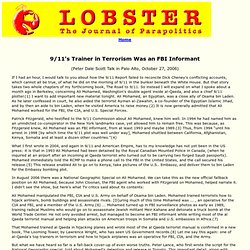 But that story takes two whole chapters of my forthcoming book, The Road to 9/11. So instead I will expand on what I spoke about a month ago in Berkeley, concerning Ali Mohamed, Washington's double agent inside al-Qaeda, and also a chief 9/11 plotter.(1) I want to add important new material tonight. Ali Mohamed, an Egyptian, was a close ally of Osama bin Laden. As he later confessed in court, he also aided the terrorist Ayman al-Zawahiri, a co-founder of the Egyptian Islamic Jihad, and by then an aide to bin Laden, when he visited America to raise money.(2) It is now generally admitted that Ali Mohamed worked for the FBI, the CIA, and U.S. Karentalford66 : They told us a lot of ...

Cover-up of Saudi 9/11 Ties Probed, JW Has Secret Flight Docs. The U.S. government’s cover-up of a Saudi connection in the 9/11 terrorist attacks is receiving new attention because a pair of legislators—one Republican, one Democrat—recently viewed a redacted chunk of a congressional report that confirms foreign state involvement in the plot. 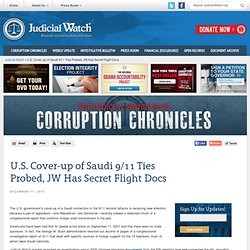 Americans have been told that Al Qaeda acted alone on September 11, 2001 and that there were no state sponsors. In fact, the George W. Bush administration blacked out dozens of pages of a congressional investigative report on 9/11 that dealt with specific sources of foreign support for the 19 hijackers, most of whom were Saudi nationals. Judicial Watch quickly launched an investigation and in 2005 obtained shocking documents from the FBI detailing how well-connected Saudis, including relatives of Osama bin Laden, left the U.S. on specially chartered flights while most air traffic was still grounded. Judicial Watch v. U.S. Department of Homeland Security. Piloten voor de waarheid áchter 9/11..! Is het vreemd als gemeld wordt in een officieel rapport, dat een passagiersvliegtuig een technische manoeuvre gemaakt zou hebben, die door de fabrikant van hetzelfde vliegtuig als ‘onhaalbaar’ wordt gekwalificeerd. 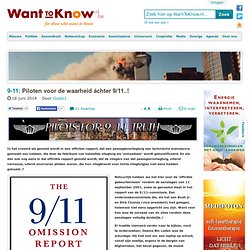 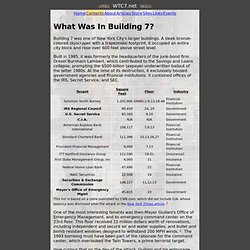 A sleek bronze-colored skyscraper with a trapezoidal footprint, it occupied an entire city block and rose over 600 feet above street level. Built in 1985, it was formerly the headquarters of the junk-bond firm Drexel Burnham Lambert, which contributed to the Savings and Loans collapse, prompting the $500-billion taxpayer-underwritten bailout of the latter 1980s. At the time of its destruction, it exclusively housed government agencies and financial institutions.

It contained offices of the IRS, Secret Service, and SEC. This list is based on a table published by CNN.com, which did not include CIA, whose tenancy was disclosed after the attack in the New York Times article. 1. Some Fear Bush Administration Could Become Target in 9/11 Trial. Former President Bush and former Vice President Dick Cheney (AP)AP2008 The Obama administration, in deciding to try alleged Sept. 11 conspirators in a New York courtroom, has said it is setting its sights on convictions, but some critics say a civilian trial -- instead of a military tribunal -- could end up targeting the Bush administration and its anti-terror policies. 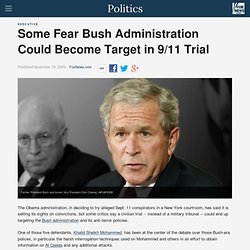 One of those five defendants, Khalid Sheikh Mohammed, has been at the center of the debate over those Bush-era polices, in particular the harsh interrogation techniques used on Mohammed and others in an effort to obtain information on Al Qaeda and any additional attacks. 9-11 predictive op DuckDuckGo. Unthinkable: An Airline Captain’s Story. Conspiracy theorists have long been disdained and discounted by the social majority as psychiatric troublemakers with an agenda all their own. 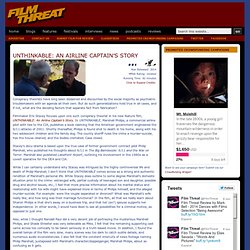 But do such generalizations hold true in all cases, and if not, what are the deciding factors that separate fact from fabrication? Filmmaker Eric Stacey focuses upon one such conspiracy theorist in his new feature film, UNTHINKABLE: An Airline Captain’s Story. In UNTHINKABLE, Marshall Philips, a commercial airline pilot with ties to the CIA, publishes a book claiming that the American government engineered the 9/11-attacks of 2001. Shortly thereafter, Philips is found shot to death in his home, along with his two adolescent children and the family dog. 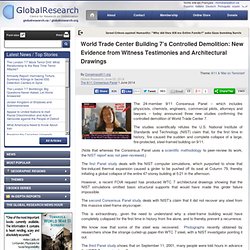 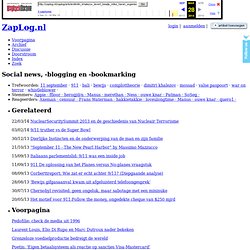 “9/11 was an Anglo-American black operation executed in collusion with Israeli Secret Services.” — 9/11 Investigator Undoubtedly the 9/11 attacks on New York City and Washington DC are the most misrepresented by officialdom in US history. Whereas the assassination of John F. Kennedy is now understood to have been a classic CIA Public Execution Plan, it does not come close to 9/11 in terms of the number and magnitude of outright falsehoods, misleading statements, fake science and fraudulent facts submitted by officials and agents of the US Government.

The ‘official’ 9/11 Commission Report stands as the most fabricated document ever produced by US tax dollars. Not only did the investigation avoid every serious inquiry about how two steel frame building came down after being dustified in NYC, it also subverted every initiative to ferret out the truth. That’s all about to change in 2014. If you read this excerpt closely, you can clearly see that Russia means business. Russia Leaks on 911 – Oops! Didn’t Think of That One! Russia is starting to fight back with leaking the evidence that the USA has worked with terrorists and knew about 911 if not help the terrorists organize the attack. The Saudi’s have controlled the terrorists and threatened Russia that their Olympic Games would be safe only if they agreed to the Saudi terms. It was the very terrorists being armed by the USA to take down the Syrian government. The Saudi connection and the USA was exposed with the Syria attempted invasion.

Too Classified to Publish: Bush Nuclear Piracy Exposed. Russia Opens Files on Nuclear 9/11 and Israeli Proliferation …by Gordon Duff, Senior Editor The report below is taken from an intelligence dump by Russian sources. As the origin is from an intelligence agency in the form of a “leak,” there are always questions. News, Politics, Entertainment, Life, Humor, Community. Many truthers remain skeptical that the attacks coordinated on the United States on September 11, 2001 were in fact not the result of terrorists, but a complex government plan. Recently discovered in the videos of that day is irrefutable proof showing that what we saw on TV that day, might not have been true.

Seen in a clip is two aspects showing that what we saw, most likely didn’t happen. First of all, the plane penetrated the sides of the second WTC building with ease before exploding inside. As the creator of the video notes, the flimsy plane wings would never have been able to penetrate thick steel and reinforced concrete as it did in the clip. Next on the list is something no one could possibly argue with. Christopher Bollyn. June 23, 2009 The 8-story WTC 6 lay between the North Tower and WTC 7. WTC 6 was evidently damaged before either tower fell and had an unexplained crater that went to the lowest basement level.

CIA secrecy over detention program threatens 9/11 prosecutions, senators warned Obama. WASHINGTON — Two powerful Senate committee chairs told President Barack Obama earlier this year that the CIA’s insistence on keeping secret how it treated prisoners under its enhanced interrogation program threatens the country’s ability to bring to justice the perpetrators of the Sept. 11, 2001, attacks. Sens. Dianne Feinstein, D-Calif., chair of the Intelligence Committee, and Carl Levin, D-Mich., head of the Armed Services Committee, sought the president’s help in getting information declassified about the CIA’s so-called harsh interrogation techniques and stressed the need for transparency on a program that essentially had ended in 2006 and that Obama formally killed when he took office in 2009.

The 9/11 Conspiracy Theory. It Wasn't Muslims. With a peer-reviewed scientific journal having published further evidence showing that World Trade Center Buildings 1, 2 and 7 were brought down in a series of controlled demolitions (but see here for an important September 11, 2012 update on what the Harrit study got wrong and what it got right), here are a few more facts to consider. It wasn't Muslims in an Afghan cave who had access to sophisticated thermitic material; it was the US military and government scientists such as those connected with NIST. How I Got Kicked Out Of The 9/11 Museum: Gothamist. Richard Gage Answers Questions About DEW Theory. ConsipracyFacts : WTC building 7 911 ......... 9/11 EXPOSED ………FORMER ITALIAN PRESIDENT FORMER PAKISTANI PRIME MINISTER AND FORMER UNITED KINGDOM FOREIGN SECRETARY EXPOSE THE 9/11 FAIRY TALE.

The September 11 attacks created an incredible conspiracy theory ……………That a rag tag band of fanatics led by a wealthy Saudi sitting in a cave in Afghanistan had hijacked 4 planes from airports guarded by private Israeli security companies four buildings and crashed them into while the mighty US airforce sat by with their fingers up their collective butts doing nothing ………………. Bankers killing bankers for the insurance money and another look at 9/11 — RT Op-Edge. Max Keiser, the host of RT's ‘Keiser Report,’ is a former stockbroker, the inventor of the virtual specialist technology, virtual currencies, and prediction markets.

Published time: May 14, 2014 19:12. Ex-CIA Pilot Gives Sworn Testimony That No Planes Hit The Twin Towers. A former CIA and civilian pilot has sworn an affidavit, stating that no planes flew into the Twin Towers as it would have been physically impossible. Famous pilot confirms 9/11 cell phone calls were faked - Denver Conspiracy. “Miracle on the Hudson” pilot tells FOX News that cell phones don’t work over 5000 ft. Hate preacher claims pre-planned explosions caused 9/11. Handless hate preacher Abu Hamza al-Masri showed Thursday that he’s not just a lover of jihad, but also of a good conspiracy theory, no matter how farfetched. In his second day of testimony in his own defense, al-Masri told jurors that he doesn’t believe the World Trade Center towers were brought down by terrorist-hijacked airliners — but rather by pre-planned explosions moments before the planes hit the Twin Towers. View topic - Sir Frank Kitson - destroying legitimate opposition.

Dangerous Censored Documents, in Soviet Russia and War on Terror America. 9/11 Witnesses Murdered, by Kevin604bc. Fiery plane crash near Buffalo, NY, kills 50. Passengers and crew aboard Flight 3407: Their stories : Home: The Buffalo News. Fiery plane crash near Buffalo, NY, kills 50. The Unspoken Truth on 9/11: “September 11 – The New Pearl Harbor” The CIA in Kuwait: Parallels to a 9/11 Suspect Washington. Classicist says quote of Virgil's inscribed on 9/11 Memorial is "shockingly inappropriate" Saudi Arabia and the al-Qaeda Monster. 24 Hard Facts About 9/11 That Cannot Be Debunked. The Bush-Saudi Connection.