Secure Messaging Scorecard. Occupy Calgary - p For Moment, the World Embraces the... Occupy Calgary - p Canadian Oilsands Staff Fired,... Justin Trudeau - We can do much better than tax breaks for... Truthout - The spread of jihadism from a corner of... Homeless Child Apparently Unaware He Lives In Nanny State. NEW YORK—Considering how these days the government in this country coddles its citizens from the cradle to the grave, an 11-year-old boy currently homeless on the streets of New York must be unaware he lives in a nanny state, reports confirmed this week. 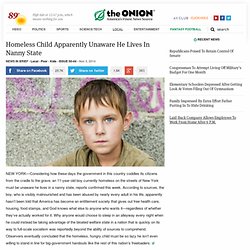 According to sources, the boy, who is visibly malnourished and has been abused by nearly every adult in his life, apparently hasn’t been told that America has become an entitlement society that gives out free health care, housing, food stamps, and God knows what else to anyone who wants it—regardless of whether they’ve actually worked for it.

Why anyone would choose to sleep in an alleyway every night when he could instead be taking advantage of the bloated welfare state in a nation that is quickly on its way to full-scale socialism was reportedly beyond the ability of sources to comprehend. Occupy Calgary - p Brazil Is Keeping Its Promise to... ISIS dump truck may have been target of first Canadian air strikes in Iraq. The first strikes of Canada's air war over Iraq appear to have been aimed at construction equipment belonging to the Islamic State in Iraq and Syria. 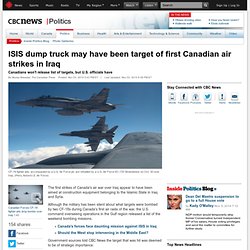 Although the military has been silent about what targets were bombed by two CF-18s during Canada's first air raids of the war, the U.S. command overseeing operations in the Gulf region released a list of the weekend bombing missions. Government sources told CBC News the target that was hit was deemed to be of strategic importance. The only official Canadian acknowledgement came from Defence Minister Rob Nicholson, who said Sunday's attacks took place in the area of Fallujah, a militant stronghold about 71 kilometres west of Baghdad. Nicholson wouldn't release details, but said more information would be forthcoming at an Ottawa briefing on Tuesday — 48 hours after the mission. However, U.S. The attack apparently destroyed five ISIS bulldozers and one ISIS dump truck used to build obstructions and berms. 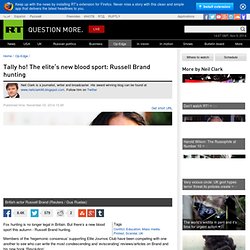 But there’s a new blood sport this autumn - Russell Brand hunting. Members of the ‘hegemonic consensus’ supporting Elite Journos Club have been competing with one another to see who can write the most condescending and ‘eviscerating’ reviews/articles on Brand and his new book ‘Revolution’. Brand was acceptable when he was doing stand-up comedy and keeping off the politics, but now that he’s dissing the British system of parliamentary democracy and calling for radical change it’s open season on him. Brand has crossed several red lines. He’s addressed anti-austerity rallies. The subtext to these attacks by establishment commentators has been: “Brand, go back to stand-up comedy and leave the serious stuff to us. Brand’s big problem is that he’s got ideas above his station. His mum was a former secretary, his dad, a photographer. Noam Chomsky calls US 'world's leading terrorist state'

EFF wants to legalize bringing 'abandoned' games back online. Some video games become totally impossible to play when their developer shuts down their servers, so the Electronic Frontier Foundation wants everyone to have the right to tweak their games to get them running again. 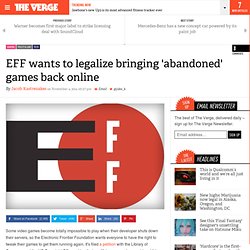 It's filed a petition with the Library of Congress and the US Copyright Office asking that modifying a game be considered fair use when it's done so that a game can be made playable again after a developer has "abandoned" it and stopped running servers needed to allow gameplay. That would allow gamers to continue playing games longer after their release and for archivists and researchers to work with games far in the future without worrying about running afoul of copyright laws. For when activation servers no longer activate The EFF's proposal is particularly relevant to games that regularly check in with activation servers to ensure that a pirated copy isn't being used.