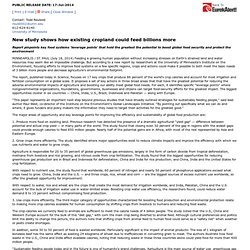 PAUL (July 18, 2014) Feeding a growing human population without increasing stresses on Earth's strained land and water resources may seem like an impossible challenge. The report, published today in Science, focuses on 17 key crops that produce 86 percent of the world's crop calories and account for most irrigation and fertilizer consumption on a global scale. "This paper represents an important next step beyond previous studies that have broadly outlined strategies for sustainably feeding people," said lead author Paul West, co-director of the Institute on the Environment's Global Landscapes Initiative.

The major areas of opportunity and key leverage points for improving the efficiency and sustainability of global food production are: From Food Insufficiency towards Trade Dependency: A Historical Analysis of Global Food Availability. Achieving global food security is one of the major challenges of the coming decades. 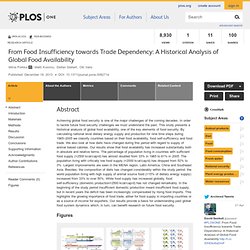 In order to tackle future food security challenges we must understand the past. This study presents a historical analysis of global food availability, one of the key elements of food security. By calculating national level dietary energy supply and production for nine time steps during 1965–2005 we classify countries based on their food availability, food self-sufficiency and food trade.

A hungry world: Lots of food, in too few places. Even if prices are not going through the roof, buying more nutritious food is still costly. 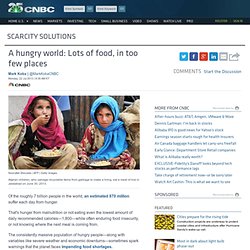 "It is ironic that good or healthier food like apples are more expensive than the food laced with sugars or fats," said Peine. "We need to be more thoughtful on what food we grow. " But the reason for the higher prices is fairly simple, said the National Farmers Union's Johnson. Peak farmland is here, food crop area to fall - study. By Alister Doyle, Environment Correspondent OSLO Mon Dec 17, 2012 9:10pm IST OSLO (Reuters) - The amount of land needed to grow crops worldwide is at a peak and an area more than twice the size of France can return to nature by 2060 due to rising yields and slower population growth, a group of experts said on Monday. The report, conflicting with U.N. studies that say more cropland will be needed in coming decades to avert hunger and price spikes as the world population rises beyond 7 billion, said humanity had reached what it called "Peak Farmland". More crops for use as biofuels and a shift towards more meat consumption in emerging economies such as China or India - demanding more cropland to feed livestock - would not offset a fall from the peak driven by improved yields, it calculated.

The report, supplied to Reuters by Ausubel, projected that almost 150 million hectares (370 million acres) could be restored to natural conditions such as forest by 2060. A June 2012 report by the U.N.' Yield Trends Are Insufficient to Double Global Crop Production by 2050. Results The global average rates of yield increase across ~13,500 political units are 1.6%, 1.0%, 0.9%, and 1.3% per year for maize, rice, wheat, and soybean, respectively ( Table 1 , Figure 1 ). A ~2.4% per year rate of yield gains (non-compounding) is needed to double crop production by 2050. Current rates are thus not achieving this goal. At current rates only ~67%, ~42%, ~38%, and ~55% increases in maize, rice, wheat and soybean production, respectively, is possible by 2050. Redefining agricultural yields: from tonnes to people nourished per hectare - Abstract - Environmental Research Letters. 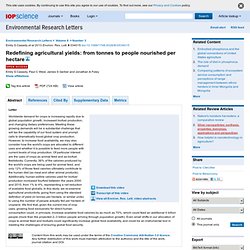 Meeting these growing demands will be a substantial challenge that will tax the capability of our food system and prompt calls to dramatically boost global crop production. However, to increase food availability, we may also consider how the world's crops are allocated to different uses and whether it is possible to feed more people with current levels of crop production. Vertical 'Pinkhouses:' The Future Of Urban Farming? : The Salt. This "pinkhouse" at Caliber Biotherapeutics in Bryan, Texas, grows 2.2 million plants under the glow of blue and red LEDs. 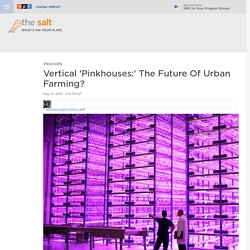 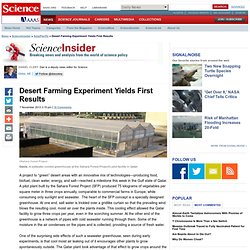 A pilot plant built by the Sahara Forest Project (SFP) produced 75 kilograms of vegetables per square meter in three crops annually, comparable to commercial farms in Europe, while consuming only sunlight and seawater. The heart of the SFP concept is a specially designed greenhouse. At one end, salt water is trickled over a gridlike curtain so that the prevailing wind blows the resulting cool, moist air over the plants inside. This cooling effect allowed the Qatar facility to grow three crops per year, even in the scorching summer. Rice gene digs deep to triple yields in drought. A gene that gives rice plants deeper roots can triple yields during droughts, according to Japanese researchers writing in Nature Genetics this week (4 August). 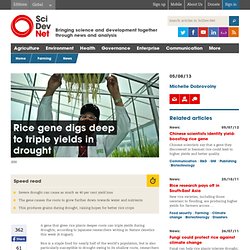 One gene to feed the world (ScienceAlert) The gene could help in the development of a more digestible sorghum. 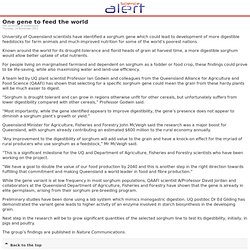