Minnesota Zoo King Vulture - Minnesota Zoo. This stunning South American bird is perhaps the most beautiful of all the vultures. 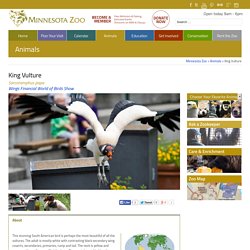 The adult is mostly white with contrasting black secondary wing coverts, secondaries, primaries, rump and tail. The neck is yellow and orange with a soft grey ruff at the base. The ornately wrinkled head is a mixture of yellow, red, blue, black and purple. The eye is ringed with red, the iris is white and the pupil black. The beak and fleshy caruncle are bright orange. Like other vultures, the King Vulture is a carrion feeder, relying on mostly mammals including livestock. Found from southern Mexico to northern Argentina, this is a bird of the tropical rainforests and wooded lowlands from sea level up to 3000 feet. This King Vulture is not colonial like many other vultures. The King Vulture seems to be relatively adaptable but does rely on tropical forests for survival. Mexico, South America Tropical lowland forests, savannas and grasslands Conservation Status Bird Wings Financial World of Birds Show.

King vulture. King Vulture - Houston Zoo. King vultures have no sense of smell, so they rely on other vulture species to lead them to food – which includes dead animals. 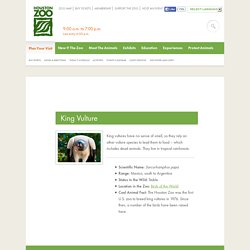 They live in tropical rainforests. Scientific Name: Sarcorhamphus papaRange: Mexico, south to ArgentinaStatus in the Wild: StableLocation in the Zoo: Birds of the WorldCool Animal Fact: The Houston Zoo was the first U.S. zoo to breed king vultures in 1976. Since then, a number of the birds have been raised here. King Vulture. Animals Birds Sarcoramphus papa The king vulture may not win any beauty contests, but you can learn about them by looking at their appearance. 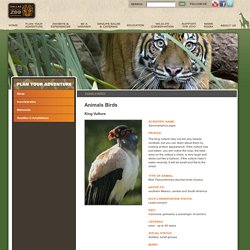 If the vulture has just eaten, you will notice the crop, the bald area on the vulture’s chest, is very large and sticks out like a balloon. If the vulture hasn’t eaten recently, it will be small and flat to the chest. Bird, Falconiformes (diurnal birds of prey) southern Mexico, central and South America Least concern Carnivore (primarily a scavenger of carrion) zoos - up to 40 years Solitary; small groups. King Vulture. Saint Louis Zoo. King Vulture- Los Angeles Zoo. The yellow, fleshy caruncle (or wattle) extending from the beak of the king vulture is not a distinguishing characteristic of male and female vultures (as is common with other species); however, it has shown an association with genes coded for disease resistance. 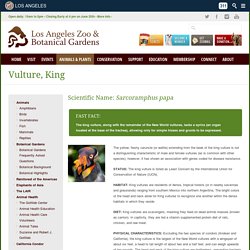 STATUS: The king vulture is listed as Least Concern by the International Union for Conservation of Nature (IUCN). HABITAT: King vultures are residents of dense, tropical forests (or in nearby savannas and grasslands) ranging from southern Mexico into northern Argentina. The bright colors of the head and neck allow for King vultures to recognize one another within the dense habitats in which they reside. DIET: King vultures are scavengers, meaning they feed on dead animal masses (known as carrion). In captivity, they are fed a vitamin supplemented protein diet of rats, chicken, and raw meat. Vultures. By Pamela Bucklinger Looking quickly, you might think this Rüppell's griffon vulture has a pretty red head. 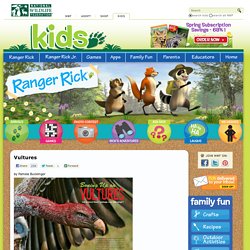 But take a closer look, and—yuck! —that's blood from its latest feast! Vultures are well known for their choice in meals. Rotten meat, bones, fur. . .nothing is left off their menu. A little water doesn't stop the black vulture above left from feeding on a dead caiman (CAY-men). It's dinnertime for three Eurasian griffon vultures picking meat off the bones of a carcass (top photo). The bearded vulture (above right) is eating its usual meal: bones. Vultures never mind leftovers. The turkey vulture chick (above left) has fluffy, white feathers on its head now. A turkey vulture (middle photo above) is spreading its wings out to warm up in the sun. Up close, the best way to tell a black vulture (top right) from a turkey vulture is that it has a gray head, while a turkey vulture's head is red. Look up in the sky, and you might see a group of vultures soaring in circles.