DEA Wants to Surveil Patients. Trans Men Stopped Them Once Before. Blacklight – The Markup. Blacklight normally takes betweeen 30 seconds and one minute to finish all tests Ad trackersIs this website sending data about users to advertising companies? 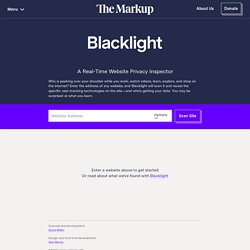 Third-party cookiesIs this website using cookies that track users around the web? Tracking that evades cookie blockersIs this website invisibly identifying your browser? Session-monitoring scriptsBlacklight looks for scripts that record how a user interacts with a page. Death by drone strike, dished out by algorithm. “Guns don’t kill people,” is the standard refrain of the National Rifle Association every time there is a mass shooting atrocity in the US. 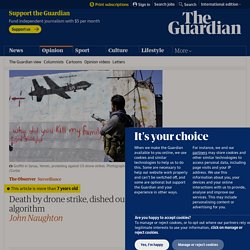 “People kill people.” Er, yes, but they do it with guns. Trump's Secret New Watchlist Lets His Administration Track Americans Without Needing a Warrant. The Trump administration has created a new and expansive national security watchlist that, for the first time since 9/11, includes Americans who have no connection to terrorism. 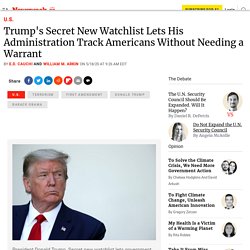 The new watchlist, authorized through a classified Attorney General order and launched in 2017, is expected to grow to well over one million names. It also allows the government to track and monitor Americans without a warrant, even when there is no evidence they're breaking the law. And while two separate laws require the government to announce new systems of data collection of Americans, there has been no acknowledgement of the expanded watchlist. The criteria to be placed on the new watchlist demands that an individual be associated with "transnational" criminal organizations, including front organizations that are actually foreign government entities. How U.S. Tech Giants Are Helping to Build China’s Surveillance State. An American organization founded by tech giants Google and IBM is working with a company that is helping China’s authoritarian government conduct mass surveillance against its citizens, The Intercept can reveal. 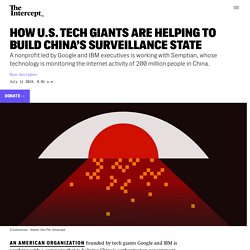 Court Ruling Shows How FBI Abused NSA Mass Surveillance. The Foreign Intelligence Surveillance Court found that the FBI may have violated the rights of potentially millions of Americans — including its own agents and informants — by improperly searching through information obtained by the National Security Agency’s mass surveillance program. 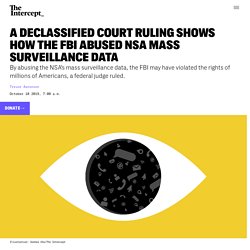 U.S. District Court Judge James E. The Rise of the Video Surveillance Industrial Complex. EU Police Push for Pan-European Facial Recognition Network. A police investigator in Spain is trying to solve a crime, but she only has an image of a suspect’s face, caught by a nearby security camera. 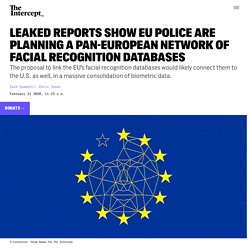 European police have long had access to fingerprint and DNA databases throughout the 27 countries of the European Union and, in certain cases, the United States. But soon, that investigator may be able to also search a network of police face databases spanning the whole of Europe and the U.S. According to leaked internal European Union documents, the EU could soon be creating a network of national police facial recognition databases. A report drawn up by the national police forces of 10 EU member states, led by Austria, calls for the introduction of EU legislation to introduce and interconnect such databases in every member state. The FBI Is Building a National Watchlist That Gives Companies Real-Time Updates on Employees. Independent Federal Agency: The Phone Dragnet Is Illegal, Shut It Down - Conor Friedersdorf.

The Privacy and Civil Liberties Oversight Board also noted that the program hasn't stopped any terrorist attacks. 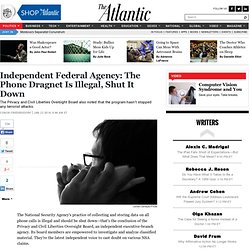 The National Security Agency's practice of collecting and storing data on all phone calls is illegal and should be shut down—that's the conclusion of the Privacy and Civil Liberties Oversight Board, an independent executive-branch agency. Its board members are empowered to investigate and analyze classified material.

They're the latest independent voice to cast doubt on various NSA claims. Yahoo Will Face A Class Action Lawsuit For Spying On Emails. (Reuters) - A U.S. judge ordered Yahoo Inc to face a nationwide class-action lawsuit accusing it of illegally intercepting the content of emails sent to Yahoo Mail subscribers from non-Yahoo Mail accounts, and using the information to boost advertising revenue. 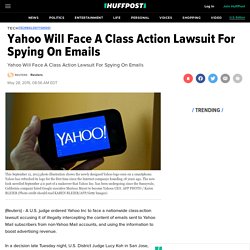 In a decision late Tuesday night, U.S. District Judge Lucy Koh in San Jose, California said people who sent emails to or received emails from Yahoo Mail subscribers since Oct. 2, 2011 may sue as a group under the federal Stored Communications Act for alleged privacy violations. NSA Insiders Reveal What Went Wrong. In a memo to President Obama, former National Security Agency insiders explain how NSA leaders botched intelligence collection and analysis before 9/11, covered up the mistakes, and violated the constitutional rights of the American people, all while wasting billions of dollars and misleading the public. 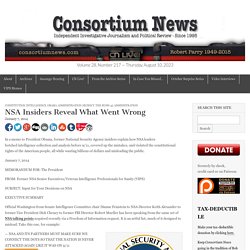 January 7, 2014 MEMORANDUM FOR: The President FROM: Former NSA Senior Executives/Veteran Intelligence Professionals for Sanity (VIPS) SUBJECT: Input for Your Decisions on NSA Official Washington – from Senate Intelligence Committee chair Dianne Feinstein to NSA Director Keith Alexander to former Vice President Dick Cheney to former FBI Director Robert Mueller – has been speaking from the same set of NSA talking points acquired recently via a Freedom of Information request. At a hearing of the Senate Judiciary Committee on October 2, Senator Feinstein showed her hand when she said: “I will do everything I can to prevent this [NSA’s bulk] program from being canceled.” Mr.