Pentagon searchers encounter grisly scenes. The fireball occurred when the jetliner's full fuel tank exploded on impact and roared down corridors so fast that "90% didn't know what happened to them," he said. 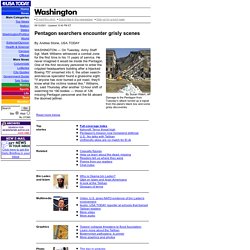 Many were sitting at their desks or behind partitions. One woman was found frozen in a sitting position, her arms posed as if reading a document. Several bodies were found huddled in groups near televisions. The Highest Treason Substantiated pt. 1. The Pentagon Attack: What the Physical Evidence Shows. The Pentagon attack left debris scattered over a wide area. 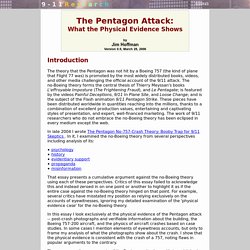 Judging from the dimensions of punctures in the facade the vast majority of debris ended up inside of the building. Nonetheless, the few photographs that show portions of the lawn near the building show an extensive debris field, easily accounting for the portions of a 757 that did not penetrate the building. Although no photographs show large pieces of aircraft, it is not reasonable to expect large pieces to have survived intact given the nature of the crash. It is noteworthy that many crashes that left very little to no large recognizable pieces involved much lower impact speeds than the Pentagon attack.

Since the Iranian C-130 was attempting to land, its airspeed was probably less than 150 mph. Phot. Loose Change Forum -> Sam Danner's Story Isn't True..... Izzy, I'm gonna help you through your trust crisis. 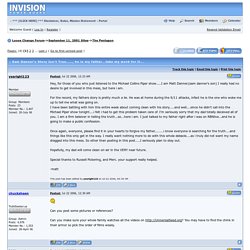 I am making one assumption though. That is you will personally challenge somebody on a very personal issue without giving the benefit of the doubt and allowing a family a couple of days to work things out and put your conspiracy theories aside - but I'll bet you didn't take the few hours required to listen to all of the audio tapes of the interviews I conveniently linked you to. Criticism but no research! Ken Doc - INVESTIGATE 9/11. There are a lot of people in this movement that claim there is no debris at all from whatever plane hit the Pentagon. 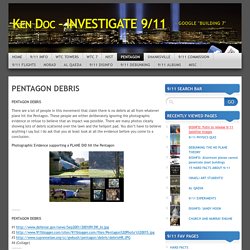 These people are either deliberately ignoring the photographic evidence or refuse to believe that an impact was possible. The Pentacon - Eyewitnesses Speak, Conspiracy Revealed. DHS Admits: We Stage Domestic Terrorism (VIDEOS) By: “Barry Soetoro, Esq” Great news: I’m not crazy. 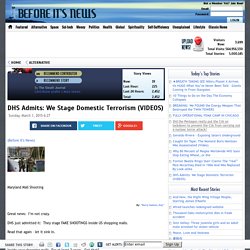 DHS just admitted it: They stage FAKE SHOOTINGS inside US shopping malls. Read that again – let it sink in. Jeh Johnson (DHS Secretary) just announced that FBI is staging FAKE Domestic Terrorism. Inside your shopping malls. The US Government is taking your money, and using it to terrorize your children. I explored fake mall shootings a couple weeks before that – and got slammed. FBI claims it “Began staging the [FAKE SHOOTING] ‘drills’ after the 2013 attack on Westgate Mall in Nairobi, Kenya.” That Kenya mall “shooting” appears fake too. Is FBI using this fake Kenya “mall shooting” as an excuse to wage domestic terrorism against US Citizens? Two years of “shopping mall shootings” were “REAL” until this week – when Jeh Johnson was forced to admit they were “FAKE.”

WTC Attacks Tania Head was considered a “real” survivor of the WTC attacks, until she was exposed as a fraud in the NETFLIX documentary, ”The Woman Who Wasn’t There.” Sandy Hoax. CIA Insider Tells 911 truth. Time to re-examine your World-view, America! 9/11 Pentagon Attack - Behind the Smoke Curtain - Barbara Honegger. 9/11 Pentagon Eyewitness Accounts. Skarlet: As I came up along the Pentagon I saw helicopters. (...) it was headed straight for the building. 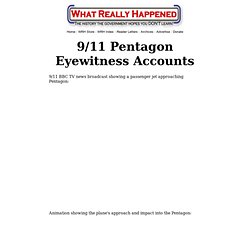 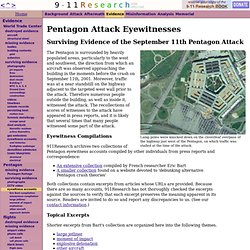 Moreover, traffic was at a near standstill on the highway adjacent to the targeted west wall prior to the attack. Therefore numerous people outside the building, as well as inside it, witnessed the attack. The recollections of scores of witnesses to the attack have appeared in press reports, and it is likely that several times that many people witnessed some part of the attack. Eyewitness Compilations 911Research archives two collections of Pentagon eyewitness accounts compiled by other individuals from press reports and correspondence: An extensive collection compiled by French researcher Eric Bart A smaller collection found on a website devoted to 'debunking alternative Pentagon crash theories' Topical Excerpts. 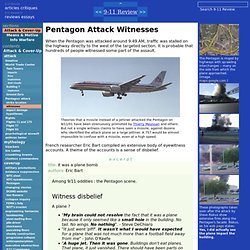 It is probable that hundreds of people witnessed some part of the assault. French researcher Eric Bart compiled an extensive body of eyewitness accounts. 9/11 Eyewitness Reports. Eye-witnesses's Accounts of Pentagon Crash Don't Add Up Since the Flash animation Pentagon Strike, we have received a great number of emails. 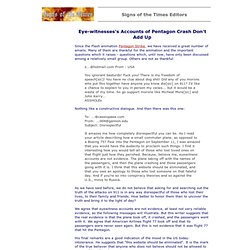 Many of them are thankful for the animation and the important questions which it raises - questions which, until now, have only been discussed among a relatively small group. Others are not as thankful: s... @hotmail.com From : USA You ignorant basturds! Nothing like a constructive dialogue. To: ... As we have said before, we do not believe that asking for and searching out the truth of the attacks on 911 is in any way disrespectful of those who lost their lives, to their family and friends. We agree that eyewitness accounts are not evidence, at least not very reliable evidence, as the following messages will illustrate. 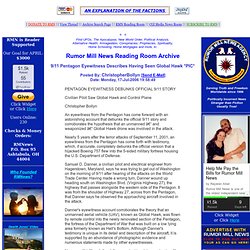 Pentagon eyewitness accounts. American Airlines flight 11 from Boston to Los Angeles had been in the air for a matter of minutes when the terrorists seized control just after 8am and changed course towards New York City. The hijacking heralded the start of a series of appalling attacks which reduced America's two most important cities to war zone-like scenes of carnage and threw the entire nation into a panic-fuelled state of siege.

From start to finish, the operation took less than three hours. The first attack came within 45 minutes of flight 11 being seized. At the World Trade Centre in downtown Manhattan, staff were already at their desks and the working day was in full flow. 9/11 Truth: Pentagon Eyewitness Testimony: Media Interviews. 9/11 Truth: 9/11 and the Pentagon Attack: What Eyewitnesses Described. NOTE: there are some minor errors that I need to fix and that have been pointed out to me. A handful of witnesses described what they saw after the attack and are not first hand accounts. I will also be adding transcripts of of live television witnesses, never before transcribed. 1. “I noticed a large aircraft flying low towards the White House.