Bush team 'agreed plan to attack the Taliban the day before September 11' WTC cameras, locks, electricity turned off weekend before 9/11. October 26, 2010 By Craig McKee Many of us can’t believe explosives were placed in the World Trade Center because it would be impossible to “sneak” them in with so many people watching. 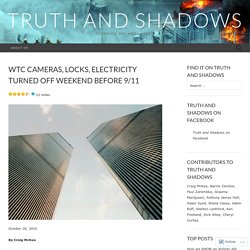 This assumes a lot of things. First, it assumes that people are paying attention when “work” is going on in the Trade Center. Secondly, and more importantly, it assumes that even if people raise questions that someone is going to listen to them. Flight 77 and the Pentagon Crash - What Really Happened Here? Click Picture for a bigger enhanced view Now what we see here is debris being pushed away from the hole. 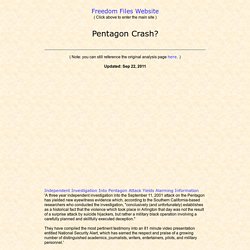 The steel columns near the impact are not pushed in but pushed sideways, like what would happen if a bomb went off, not like what would happen if a plane hit it. You can see a hole big enough for the fuselage possibly on the left, However there hole the claimed hole it made is to the right, which clearly could not possibly fit the fuselage of a 757 through it. It is also important to note that there is no wing damage to the building at all. By all rights if the wings could take out Light Poles, beams shouldn't even be there, wouldn't you think? Take a look at this hole and notice that the I beams are gone, they are not there at all! Click picture for a closer view Have a look at this business jet that hit a warehouse after skidding off a runway in New Jersey on Feburary 2, 2005.

Now take a look at this picture. Ode To Yamasaki – Was the WTC architect a CIA asset? ← yankee451.info. February 29th in September 11 Attacks Research and Analysis by s.deak@comcast.net . 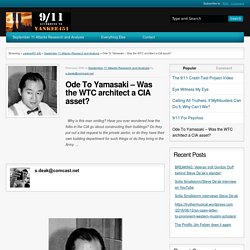 Why is this man smiling? Military Exercises Up to 9/11. Donald Rumsfeld and Dick Cheney, along with then-President Gerald Ford, April 28, 1975. 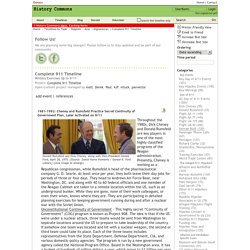 [Source: David Hume Kennerly / Gerald R. Ford Library] (click image to enlarge)Throughout the 1980s, Dick Cheney and Donald Rumsfeld are key players in one of the most highly classified programs of the Reagan administration. Presently, Cheney is working as a Republican congressman, while Rumsfeld is head of the pharmaceutical company G.

D. Searle. An E-4B Airborne Command Post. WTC South Tower powered down for 36 hours just days before attack, security deactivated on floors 50 and up, many suspicious workers seen coming and going during blackout » Intellihub. (INTELLIHUB) — A data center worker by the name of Scott Forbes, who was employed from 2009 to September of 2001 by Fiduciary Trust Company International, who’s data center was located on the 97th floor of the South Tower in the World Trade Center complex before it was destroyed on September 11th by “planes”, has come forth with bombshell information regarding strange events that Forbes himself witnessed take place in the days and weeks leading up to the attacks. 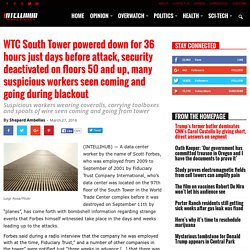 Forbes said during a radio interview that the company he was employed with at the time, Fiduciary Trust,” and a number of other companies in the tower” were notified just “three weeks in advance […] that there was going to be a power down,” which Forbes said was extremely unusual given the nature, scope, and magnitude of the financial agencies which occupied the tower at the time. In other words, the agencies were not given ample time to prepare for such a power down. 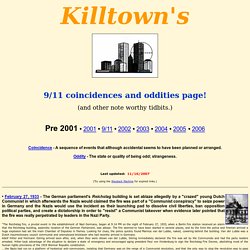 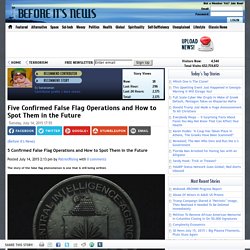 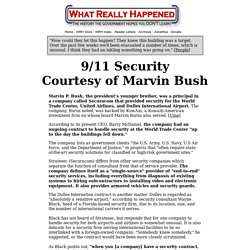 Bush, the president’s younger brother, was a principal in a company called Securacom that provided security for the World Trade Center, United Airlines, and Dulles International Airport. The company, Burns noted, was backed by KuwAm, a Kuwaiti-American investment firm on whose board Marvin Burns also served. [Utne] According to its present CEO, Barry McDaniel, the company had an ongoing contract to handle security at the World Trade Center "up to the day the buildings fell down. " The company lists as government clients "the U.S. Stratesec (Securacom) differs from other security companies which separate the function of consultant from that of service provider.

The Dulles Internation contract is another matter. Black has not heard of Stratesec, but responds that for one company to handle security for both airports and airlines is somewhat unusual. WTC Power Down. The story... 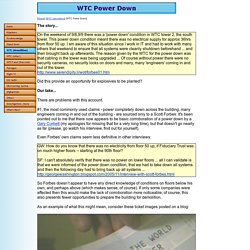 On the weekend of 9/8,9/9 there was a 'power down' condition in WTC tower 2, the south tower. This power down condition meant there was no electrical supply for approx 36hrs from floor 50 up. I am aware of this situation since I work in IT and had to work with many others that weekend to ensure that all systems were cleanly shutdown beforehand ... and then brought back up afterwards. FEMA was in New York the Night Before 9/11. Click HERE for a RealAudio recording of a statement made by FEMA spokesman Tom Kenney to Dan Rather on Wednesday, September 12th, 2001. 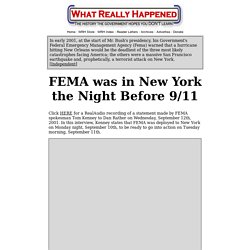 In this interview, Kenney states that FEMA was deployed to New York on Monday night, September 10th, to be ready to go into action on Tuesday morning, September 11th. Needless to say, this recording caused quite a stir. The official reaction was Kenney was simply confused about the dates. However, on the recording Kenney is complaining about not getting full access to the site until "today".