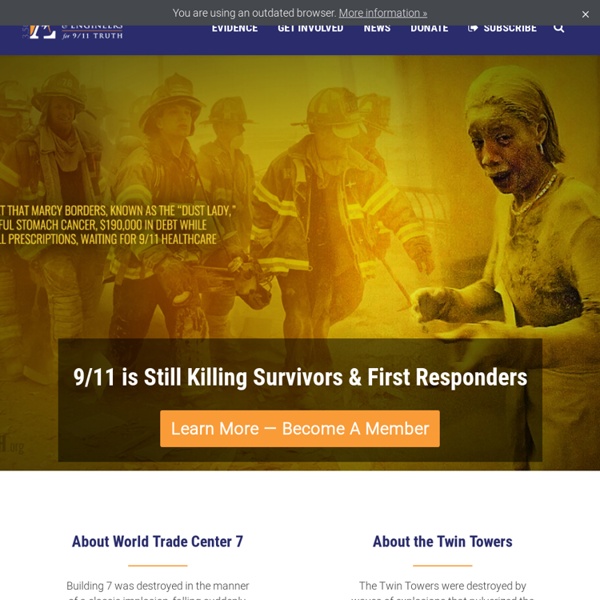 WTC Tower construction showing core columnIntroduction To believe the official conspiracy theory regarding the destruction of the three World Trade Center high-rise buildings requires an Olympian leap of faith. It asks us to accept impossible coincidences, to assume the laws of physics don't always apply, and to ignore common sense. Being one of 9/11's least likely hypotheses, it requires that we emotionally moor ourselves to its tenets, because an intellectual examination or inquiry would quickly reveal dots that don't connect. Fortunately, a much more cogent theory exists. It suggests that controlled demolition, not fire, was the cause of the collapse of WTC Buildings 1,2, and 7.

9/11 Masterminds – Explosive Connections This important video exposes the masterminds of 9/11, many of which had offices in the Twin Towers, and were conveniently absent on the day of the attacks. L. Paul Bremer, of Marsh & McLennan, which at the time was the world’s largest insurance brokerage company.

9/11 WTC Building 7 + 2nd Plane Impact (Before It's News) World Trade Center building 7 was not hit by a plane. it collapsed in its own footprint in free fall time. The fires seen here appear to be very minimal, and although we do not have an exact time of the photo, it was at least after one building had collapsed » Pentagon Papers Whistleblower Ellsberg Says Government Has ORDERED the Media Not to Cover 9/11 Alex Jones Washington’s Blog June 15, 2011 It’s big news that the Pentagon Papers have finally been released by the government. But the statements from Pentagon Papers whistleblower Daniel Ellsberg about 9/11 have not been covered by the corporate media. As Fire Dog Lake’s Jeff Kaye writes today: What Do We Really Know About Osama bin Laden’s Death? Mark Bowden was watching a ballgame — the Phillies versus the Mets — on the night of May 1, 2011, when the network cut away to President Obama in the East Room of the White House. “Tonight,” the president said, ‘‘I can report to the American people and to the world that the United States has conducted an operation that killed Osama bin Laden, the leader of Al Qaeda and a terrorist who’s responsible for the murder of thousands of innocent men, women and children.’’ Five minutes or so after the president wrapped up his brief remarks, as thousands of Americans gathered in front of the White House and at ground zero chanting ‘‘U-S-A!

Teaching 9/11 to Conspiracy Theorists This article was originally written in November 2015. Many have accused this author of teaching “conspiracy theories” to college students. Contrary to critics’ assertions, however, events such as the Sandy Hook School massacre or Boston Marathon bombing were never addressed in any courses taught at his former university. Only in the last college class he taught over a twenty year career in academe (13 of which were spent at Florida Atlantic University) did he have a chance to carefully examine and discuss September 11,

Chechnya High Rise Burns For 29 Hours With No Collapse, WTC 7? By Joe Martino | Activist Post Chechnya high rise burned for 29 hours On April 3rd Chechnya’s tallest building, a luxury hotel, caught fire and burned for 29 hours before finally being put out. The building is completely destroyed; however, it did not collapse. This raises many questions as to how World Trade Center 7 could have collapsed on 9/11 with only small fires on a couple of floors. Looking at the photo taken of yesterday’s blaze and comparing it to the WTC 7 photo taken on 9/11, we see two very different situations.

Evidence That a Frozen Fish Didn't Impact the Pentagon on 9-11 and Neither Did a Boeing 757 After the release of the QFG Pentagon Strike Flash Animation on August 23rd, 2004, a veritable onslaught of new articles were published that sought to dismiss the "no plane at the Pentagon" theory. One such article, that is frequently referenced by certain '9/11 researchers' was authored by a member of the forum at the "Above Top Secret" (ATS) website. Interestingly, the article was written just a few weeks after the release of the Pentagon Strike Flash animation, which by then, was winging its way around the world and into the inboxes of millions of ordinary citizens. Perhaps you were one of them... The claim that promoters of the "no plane at the Pentagon" theory were doing immense damage to the truth/accountability movement was raised in Mike Ruppert's book Crossing the Rubicon.

Sorgfelt added: 9/11 CIA Official Account of 9/11 a “Joke” and a “Cover-up” September 23, 2007 – Seven CIA veterans have severely criticized the official account of 9/11 and have called for a new investigation. “I think at simplest terms, there’s a cover-up. The 9/11 Report is a joke,” said Raymond McGovern, 27-year veteran of the CIA, who chaired National Intelligence Estimates during the seventies. “There are a whole bunch of unanswered questions. And the reason they’re unanswered is because this administration will not answer the questions,” he said. The Joy of Conspiracy Denial - Advertisement - Recently I read another stinging rebuke of the 9-11 conspiracy theorists for their frightful mishandling of evidence, their will to believe only what gives them psychological comfort, and their general state of delusion. It was not the first I had read, nor will it be the last.

How it Was Done: 9/11 and the Science of Building Demolition #howtheydid911 As public awareness grows about the truth about 9/11, it serves to point out that many features of the towers' destruction fit perfectly with standard patterns of demolition. Evidence which at first seems puzzling is in fact consistent with known demolition techniques. WTC 7 differed from Towers One and Two in that WTC7 was a traditional "bottom-up" implosion. The Twin Towers, on the other hand, exhibited the more unfamiliar pattern of a "banana peel" demolition, which starts at the middle or the top of a building and progresses downward.

9/11 Conspiracy Theories - Debunking the Myths - World Trade Center Violent Collapse: Pancaking floors—not controlled demolition—expel debris and smoke out South Tower windows. (Photograph by AP/Wide World Photos) The collapse of both World Trade Center towers—and the smaller WTC 7 a few hours later—initially surprised even some experts. But subsequent studies have shown that the WTC's structural integrity was destroyed by intense fire as well as the severe damage inflicted by the planes. That explanation hasn't swayed conspiracy theorists, who contend that all three buildings were wired with explosives in advance and razed in a series of controlled demolitions. Widespread Damage