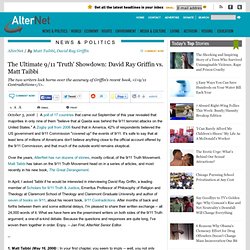 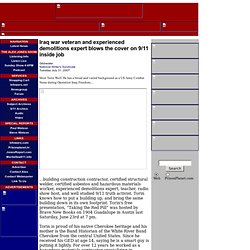 He has a broad and varied background as a US Army Combat Nurse during Operation Iraqi Freedom,.... ...building construction contractor, certified structural welder, certified asbestos and hazardous materials worker, experienced demolitions expert, teacher, radio show host, and well studied 9/11 truth activist. Torin knows how to put a building up, and bring the same building down in its own footprint. Torin's free presentation, “Taking the Red Pill” was hosted by Brave New Books on 1904 Guadalupe in Austin last Saturday, June 23rd at 7 pm. Torin is proud of his native Cherokee heritage and his mother is the Band Historian of the White River Band Cherokee from the central United States. Ironically, Torin signed his papers to join the army on September 11th, 2000.

Those words are not just backed up with his qualifications because his presentation goes through the hard physics as well. 9/11 Timeline. 9/11 Timeline Two-page Summary of 9/11 Timeline To verify 9/11 timeline statements, use links to articles on major media websites America's top military leaders drafted plans to kill innocent people and commit acts of terrorism in US cities to trick the public into supporting a war against Cuba in the early 1960s. 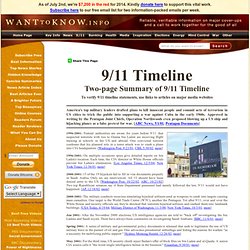 Approved in writing by the Pentagon Joint Chiefs, Operation Northwoods even proposed blowing up a US ship and hijacking planes as a false pretext for war. [ABC News, 5/1/01, Pentagon Documents] 1996-2001: Federal authorities are aware for years before 9/11 that suspected terrorists with ties to Osama bin Laden are receiving flight training at schools in the US and abroad. 1996-2001: On multiple occasions spies give detailed reports on bin Laden's location. 2000-2001: 15 of the 19 hijackers fail to fill in visa documents properly in Saudi Arabia.

May 2001: For the third time, US security chiefs reject Sudan's offer of thick files on bin Laden and al-Qaeda. The “War on Terror” is a Criminal Fraud. TEHRAN (FNA)- Canadian scholar Prof. 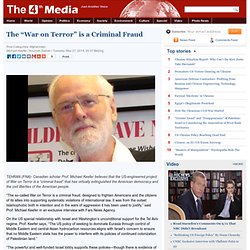 It was from the outset Islamophobic both in intention and in the wars of aggression it has been used to justify,” said Prof. Michael Keefer in an exclusive interview with Fars News Agency. On the US special relationship with Israel and Washington’s unconditional support for the Tel Aviv regime, Prof. “The powerful and well-funded Israel lobby supports these policies—though there is evidence of a growing alienation among young Jews both from this lobby and from the state of Israel,” he added. FNA had the opportunity to conduct an extensive interview with Prof. During George W. 9/11 Truth for Peace? Sydney's Sept 11 Protest Calls for End of Afghan War! Sydney’s Sept 11 Protest Calls for End of Afghan War! 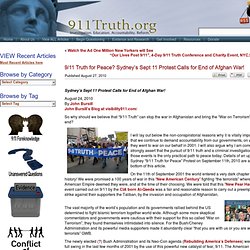 August 24, 2010 By John BursillJohn Bursill’s Blog at visibility911.com/ So why should we believe that “9/11 Truth” can stop the war in Afghanistan and bring the “War on Terrorism” to an end? I will lay out below the non-conspiratorial reasons why it is vitally important that we continue to demand accountability from our governments, on why it is they went to war on our behalf in 2001. I will also argue why I am correct to strongly assert that the pursuit of 9/11 truth and a criminal investigation of those events is the only practical path to peace today. Are You Absolutely Certain That You Know The Truth About What Happened On 9/11? TheTruthWins Do you believe that you know precisely what happened on 9/11/2001? 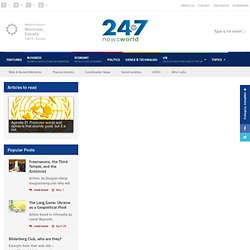 Are you absolutely certain that you know the truth? If so, what you are about to see might shake you up quite a bit. The events that happened 12 years ago on this day shocked the world and will certainly never be forgotten. Thousands of innocent people died needlessly, and that day fundamentally changed the course of history.