The rectum of HADES

Underestimating the Challenges of Avoiding a Ghastly Future. Introduction Humanity is causing a rapid loss of biodiversity and, with it, Earth's ability to support complex life. 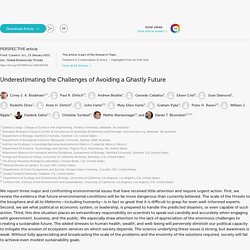 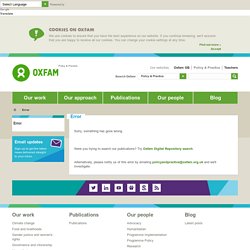 If you continue browsing, we’ll assume that you are happy to receive all our cookies. You can change your cookie settings at any time. Oxfam GB Policy & Practice. WWF:n uusi raportti: Selkärankaisten eläinten populaatiot kutistuneet erittäin hälyttävästi – Latinalaisessa Amerikassa lajien yksilömäärät ovat pienentyneet 94 prosenttia. Revealed: oil giants help fund powerful police groups in top US cities. Big corporations accused of driving environmental and health inequalities in black and brown communities through toxic and climate-changing pollution are also funding powerful police groups in major US cities, according to a new investigation. 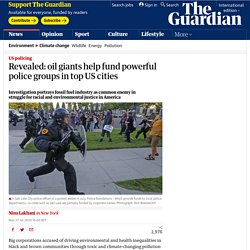 Some of America’s largest oil and gas companies, private utilities, and financial institutions that bankroll fossil fuels also back police foundations – opaque private entities that raise money to pay for training, weapons, equipment, and surveillance technology for departments across the US. The investigation by the Public Accountability Initiative, a nonprofit corporate and government accountability research institute, and its research database project LittleSis, details how police foundations in cities such as Seattle, Chicago, Washington, New Orleans and Salt Lake City are partially funded by household names such as Chevron, Shell and Wells Fargo. The report included such companies as: After 40 years, researchers finally see Earth’s climate destiny more clearly.

It seems like such a simple question: How hot is Earth going to get? 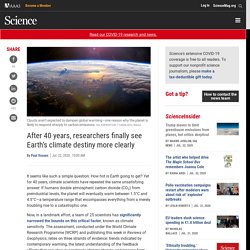 Yet for 40 years, climate scientists have repeated the same unsatisfying answer: If humans double atmospheric carbon dioxide (CO2) from preindustrial levels, the planet will eventually warm between 1.5°C and 4.5°C—a temperature range that encompasses everything from a merely troubling rise to a catastrophic one. Now, in a landmark effort, a team of 25 scientists has significantly narrowed the bounds on this critical factor, known as climate sensitivity. Sea life threatened by huge Chinese fleet (Galapagos/Pacific) - BBC News - 17th July 2020. Jani Kaaron kolumni: Ja kylläpä me tapoimme, tapoimme ja tapoimme. Trash rivers: these 10 rivers are responsible for most plastic that flows out to the seas. Cheap, durable and multifunctional, plastic is one of humanity’s most successful inventions. 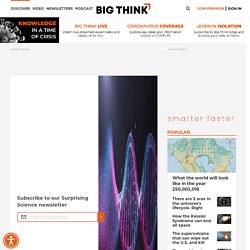 From the 1950s to 2015, we’ve produced 8.3 billion metric tons of the stuff. By now, it’s everywhere. It’s also non-biodegradable. The Triumph of Triviality. The results of the cultural indoctrination stakes are not yet in but there is a definite trend – triviality leads, followed closely by superficiality and mindless distraction. 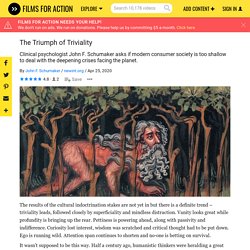 Vanity looks great while profundity is bringing up the rear. Pettiness is powering ahead, along with passivity and indifference. Curiosity lost interest, wisdom was scratched and critical thought had to be put down. Ego is running wild. Attention span continues to shorten and no-one is betting on survival. It wasn’t supposed to be this way. Forecasters predict a very active 2020 Atlantic hurricane season. The Atlantic hurricane season is likely to be very active, fueled by very warm ocean temperatures in the tropics, according to several forecasts including a report released April 16 by The Weather Channel. 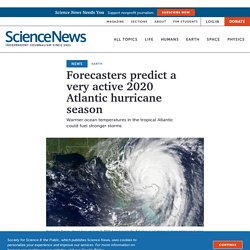 A total of 18 named storms — nine of them hurricanes — are predicted in the season starting June 1, according to the Atlanta-based weather forecasting company, which is owned by IBM. That’s higher than the seasonal average of 12 named storms, including six hurricanes, determined by the U.S. Miksi fiksut ja reilut ihmiset eivät ole superrikkaita? Julkaistu 06.09.2019 - 15:28. 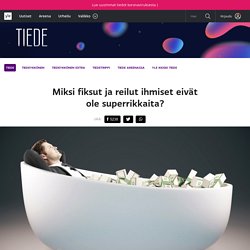 Päivitetty 06.09.2019 - 15:28. This Is Not the Sixth Extinction. It’s the First Extermination Event. From the “insect apocalypse” to the “biological annihilation” of 60 percent of all wild animals in the past 50 years, life is careening across every planetary boundary that might stop it from experiencing a “Great Dying” once more. 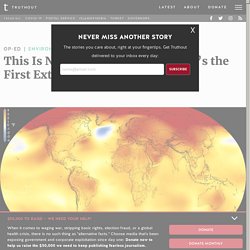 But the atrocity unfolding in the Amazon, and across the Earth, has no geological analogue — to call it the “sixth extinction event” is to make what is an active, organized eradication sound like some kind of passive accident. This is no asteroid or volcanic eruption or slow accumulation of oxygen in the atmosphere due to cyanobacteria photosynthesis. Tekniikan Maailma. We Now Know Why Naval Sonar Leads To Mass Whale Strandings. Kolumni: ruoantuotannolla, flunssalla ja corona-viruksella on yhteys - elämme itseaiheutettujen epidemioiden aikaa. The end of the oceans: The world’s oceans and all marine life are on the brink of total collapse. In June this year, scientists from the University of Tasmania and the University of Technology Sydney published research showing that over the past decade the biomass of large fish in Australian waters has declined by more than a third. 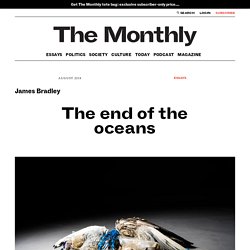 The results may have jarred with government claims of Australian fisheries being among the most sustainable in the world, but they closely matched official figures showing a 32 per cent decline in Australian fishery catches in the same period. The declines were sharpest in species targeted for fishing and areas in which fishing is permitted, but even populations of species not exploited by fishing declined across the same period. How the oil industry has spent billions to control the climate change conversation. America’s oil companies are trying to rebrand themselves as part of the solution to the climate crisis, launching a campaign to counter top Democrats’ proposals to rapidly cut pollution from the power plants and cars that run on the industry’s petroleum and natural gas.

They say natural gas – a fossil fuel that emits heat-trapping carbon dioxide – is helping to slow climate disruption by providing an alternative to coal. Fresh Cambridge Analytica leak ‘shows global manipulation is out of control’ Deep-Sea Mining and the Race to the Bottom of the Ocean. Unless you are given to chronic anxiety or suffer from nihilistic despair, you probably haven’t spent much time contemplating the bottom of the ocean. Many people imagine the seabed to be a vast expanse of sand, but it’s a jagged and dynamic landscape with as much variation as any place onshore.

This Is Not the Sixth Extinction. It’s the First Extermination Event. FinnGen-tutkimushanke vie suomalaiset löytöretkelle genomitietoon. Fishery collapse ‘confirms Silent Spring pesticide prophecy' The Silent Spring prophecy that pesticides could “still the leaping of fish” has been confirmed, according to scientists investigating the collapse of fisheries in Japan. They say similar impacts are likely to have occurred around the world. The long-term study showed an immediate plunge in insect and plankton numbers in a large lake after the introduction of neonicotinoid pesticides to rice paddies.

This was rapidly followed by the collapse of smelt and eel populations, which had been stable for decades but rely on the tiny creatures for food. The analysis shows a strong correlation but cannot prove a causal link between the insecticides and the collapse. However, independent scientists said other possibilities had been ruled out and that the work provided “compelling evidence”. The Bee Has Been Declared "Most Important Living Being on the Planet” (TT) — At a meeting of the Royal Geographic Society of London, Earthwatch Institute declared bees the most invaluable species on this planet, as reported by The Guardian in 2008.

And along with it comes this disturbing piece of news. Munich study confirms severe decline in insect populations in Germany. In October 2017, a long-term study by the Entomological Society Krefeld hit like a bomb: Within thirty years, the number of flying insects in Germany was said to have decreased by three quarters. Now a research team led by Sebastian Seibold and Wolfgang Weisser, who teach terrestrial ecology at the Technical University of Munich, is confirming the reported decline. The biologists published their results on October 30 in the journal Nature. "Previous studies have concentrated either exclusively on biomass, i.e. the total weight of all insects, or on individual species or groups of species," said Seibold, head of the research group, highlighting the special nature of his new research work. His group combined both approaches. ‘All of us are in danger’: John Pilger delivers warning from Julian Assange.

Shell is not a green saviour. It’s a planetary death machine. It is hard to believe it needs stating, but it does. The oil industry is not your friend. Rich Businessman Proudly Kills Two Baby Elephants And Poses For Pictures - Green World Warriors. 14 tons of pangolin scales seized in Singapore in a single smuggling bust. In a statement, customs officials said they inspected a 40-foot container passing through Singapore from Nigeria and labeled as "frozen beef. " Researchers Have Identified How Naval Sonar Is Killing And Beaching Whales - Sea Voice News. We have known for a long time that naval sonar has devastating effects on marine life but just exactly how it leads to sickness and death was a mystery till now.

Suomalaisten kansainvälisellä lasten hyväksikäytöllä on pitkät ja kunniattomat perinteet - Anzion mukaan. 1988 Internal Shell Report "The Greenhouse Effect" This 1988 Shell report, discovered by Jelmer Mommers of De Correspondent, shines light on what the company knew about climate science, its own role in driving global CO2 emissions, the range of potential political and social responses to a warming world. The confidential report, “The Greenhouse Effect,” was authored by members of Shell’s Greenhouse Effect Working Group and based on a 1986 study, though the document reveals Shell was commissioning “greenhouse effect” reports as early as 1981. Shell and Exxon's secret 1980s climate change warnings. One day in 1961, an American economist named Daniel Ellsberg stumbled across a piece of paper with apocalyptic implications. Ellsberg, who was advising the US government on its secret nuclear war plans, had discovered a document that contained an official estimate of the death toll in a preemptive “first strike” on China and the Soviet Union: 300 million in those countries, and double that globally.

Tulevaisuus on tuhottu. Where have all our insects gone? ‘Raw hatred’: why the 'incel' movement targets and terrorises women. Humans just 0.01% of all life but have destroyed 83% of wild mammals – study. Earth has lost half of its wildlife in the past 40 years, says WWF. SCANDAL: According To A German Newspaper, Africa Pays 400 Billion Euros Per Year to France!!