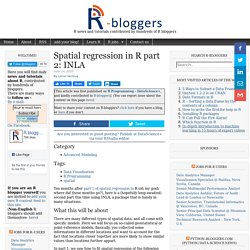 , here is a (hopefully long-awaited) second part this time using INLA, a package that is handy in many situations. What this will be about There are many different types of spatial data, and all come with specific models. In part 1, we saw how to fit spatial regression of the following form: \[ y_i \sim \mathcal{N}(\mu_i, \sigma) \] where \(i\) index the different lines in your dataset, \(y\) is the response variable, \(\mu\) is a vector of expected values and \(\sigma\) is the residual standard deviation. \[ \mu_i = X_i * \beta + u(s_i) \] the expected values depend on some covariates that are in the design matrix X, these get multiplied by some coefficient to estimate (the \(\beta\)'s) plus a spatial random effect \(u\) that depend on location \(s_i\) of the data point. \[ u(s_i) \sim \mathcal{MVN}(0, \Sigma) \] The model that we want to fit is: 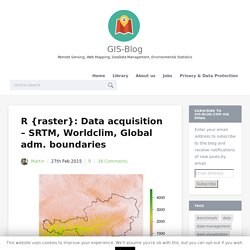 Today I will show how powerful the R {raster} package is on another example. The raster package is not only a great tool for raster processing and calculation but also very useful for data acquisition. With the function getData() you can download the following data directly into R and process it: SRTM 90 (elevation data with 90m resolution between latitude -60 and 60)World Climate Data (Tmin, Tmax, Precip, BioClim)Global adm. boundaries (different levels) Downloading and exploring raster data. Climate - Using R to extract data from WorldClim? You can use raster package to download WorldClim data, see ? 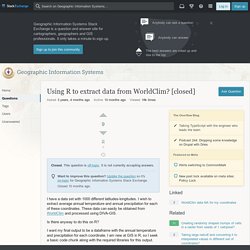 Getdata to know about resolution, variables and coordinates. [#R] How to convert lat-long coordinates to UTM (easting-northing) This bit is part of my work in modeling the hydrology of Cikapundung Catchment. 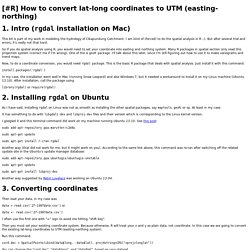 I am kind of (forced) to do the spatial analysis in R :-). But after several trial and errors, it's really not that hard. Tidying/reshaping tables using tidyr. Data tables come in different sizes and shape; they can be a very simple two column dataset or they can consist of many columns and “sub-columns”. 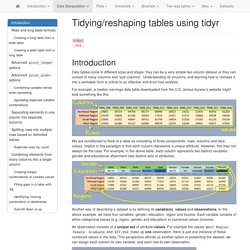 Understanding its structure, and learning how to reshape it into a workable form is critical to an effective and error free analysis. For example, a median earnings data table downloaded from the U.S. census bureau’s website might look something like this: We are conditioned to think of a table as consisting of three components: rows, columns and data values. Implicit in this paradigm is that each column represents a unique attribute. However, this may not always be the case. Another way of describing a dataset is by defining its variable(s), values and observations. An observation consists of a unique set of attribute values. Note that each row of the table is part of a unique set of variable attributes. The next sections will demonstrate how one can convert a wide format to a long format and vice versa. 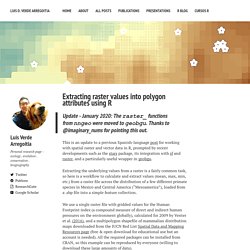 Thanks to @imaginary_nums for pointing this out. This is an update to a previous Spanish-language post for working with spatial raster and vector data in R, prompted by recent developments such as the stars package, its integration with sf and raster, and a particularly useful wrapper in geobgu. Error - Cookies Turned Off. R is an open‐source programming environment for statistical computing and graphics structured by numerous contributed packages. 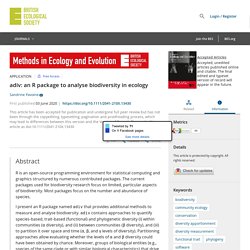 The current packages used for biodiversity research focus on limited, particular aspects of biodiversity. Most packages focus on the number and abundance of species. I present an R package named adiv that provides additional methods to measure and analyse biodiversity. adiv contains approaches to quantify species‐based, trait‐based (functional) and phylogenetic diversity (i) within communities (α diversity), and (ii) between communities (β diversity), and (iii) to partition it over space and time (α, β, and γ levels of diversity). Partitioning approaches allow evaluating whether the levels of α and β diversity could have been obtained by chance. Git - the simple guide - no deep shit! 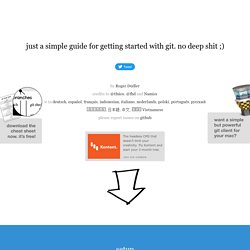 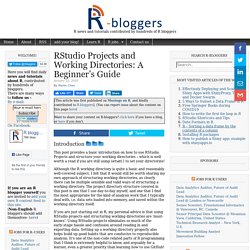 If you are just starting out in R, my personal advice is that using RStudio projects and structuring working directories are ‘must-knows’. What is a RStudio project, and why? Primeros pasos de Git con R. Structural Equation Modeling in R for Ecology and Evolution. Introduction to Multigroup Analysis Often in ecology we wish to compare the results from two or more groups. 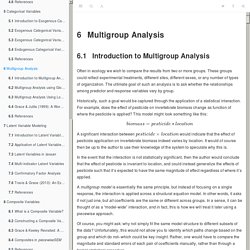 These groups could reflect experimental treatments, different sites, different sexes, or any number of types of organization. The ultimate goal of such an analysis is to ask whether the relationships among predictor and response variables vary by group. Historically, such a goal would be captured through the application of a statistical interaction.

For example, does the effect of pesticide on invertebrate biomass change as function of where the pesticide is applied? Biomass=pesticide∗location A significant interaction between pesticide×location would indicate that the effect of pesticide applicaiton on invertebrate biomass indeed varies by location. A multigroup model is essentially the same principle, but instead of focusing on a single response, the interaction is applied across a structural equation model. Curve Fitting using Linear and Nonlinear Regression - Statistics By Jim. Collinearity isn't a disease that needs curing. Abstract Once they have learnt about the effects of collinearity on the output of multiple regression models, researchers may unduly worry about these and resort to (sometimes dubious) modelling techniques to mitigate them.

I argue that, to the extent that problems occur in the presence of collinearity, they are not caused by it but rather by common mental License. Rladieschile/talleres-tematicos-mayo. Geocomputation with R. R para Ciencia de Datos. R-sig-ecology - CCA vs NMDS and ordisurf. Dear all, Thanks for your help. It took me some time to replace all informations together in my little bit less confused brain. Maybe I should give some explanations about the context of my study and the purpose to go further with this discussion. Theory: The objective of my phD thesis is to improve scientific knowledge about the ecology of a very particular family of aquatic plants : the charophytes. I choose to study closely the response of species (cover and life cycle) to fine-scale gradients. For all these reasons, I firstly I tried CCA ordination. Why not explore unconstrained ordination methods and went further with NMDS ("V2" mission in Anderson et al 2011)?

At last but not least, I am not sure that the longitudinal nature of my dataset is really a problem. Tables with labels in R. Introduction expss computes and displays tables with support for ‘SPSS’-style labels, multiple / nested banners, weights, multiple-response variables and significance testing. Linear Regression Essentials in R - Articles. Before using a model for predictions, you need to assess the statistical significance of the model. This can be easily checked by displaying the statistical summary of the model. Model summary Display the statistical summary of the model as follow: summary(model) ## ## Call: ## lm(formula = sales ~ ., data = train.data) ## ## Residuals: ## Min 1Q Median 3Q Max ## -10.412 -1.110 0.348 1.422 3.499 ## ## Coefficients: ## Estimate Std.

The summary outputs shows 6 components, including: Call. The first step in interpreting the multiple regression analysis is to examine the F-statistic and the associated p-value, at the bottom of model summary. In our example, it can be seen that p-value of the F-statistic is < 2.2e-16, which is highly significant. Coefficients significance To see which predictor variables are significant, you can examine the coefficients table, which shows the estimate of regression beta coefficients and the associated t-statistic p-values. Regression with Categorical Variables: Dummy Coding Essentials in R - Articles. This chapter describes how to compute regression with categorical variables.

Plot Grouped Data: Box plot, Bar Plot and More - Articles. In this chapter, we’ll show how to plot data grouped by the levels of a categorical variable. Data wrangling in R. StatsCourses - HLP Lab Wiki. All material posted here is subject to common sense copyright ;). That is, I'd appreciate if you cite if something is useful, and if you ask me before using materials in your classes (fjaeger@bcs.rochester.edu). Attachment:Groningen11.pdf of StatsCourses - HLP Lab Wiki. Generalized Additive Models. Interplot: Plot the Effects of Variables in Interaction Terms. Frederick Solt and Yue Hu The interplot package is a tool for plotting the conditional coefficients (“marginal effects”) of variables included in multiplicative interaction terms.

The function plots the changes in the coefficient of one variable in a two-way interaction term conditional on the value of the other included variable. The plot also includes simulated 95% confidential intervals of these coefficients. Slides gradientanalysis. R - Binomial glmm with a categorical variable with full successes - Cross Validated. Regression - Interpreting the drop1 output in R - Cross Validated. 6. Make It Pretty: Plotting 2-way Interactions with ggplot2 – Sak on Science.

Pimp Your Graph. Using R for linear regression. Extract Seasonal & Trend: using decomposition in R - Anomaly. R - Does the sign of scores or of loadings in PCA or FA have a meaning? May I reverse the sign? - Cross Validated. 8.2 Cross Correlation Functions and Lagged Regressions. Gamma Hurdle Models. Ggplot2 - Easy way to mix multiple graphs on the same page - Easy Guides - Wiki - STHDA. To arrange multiple ggplot2 graphs on the same page, the standard R functions - par() and layout() - cannot be used.

The basic solution is to use the gridExtra R package, which comes with the following functions: grid.arrange() and arrangeGrob() to arrange multiple ggplots on one pagemarrangeGrob() for arranging multiple ggplots over multiple pages. However, these functions makes no attempt at aligning the plot panels; instead, the plots are simply placed into the grid as they are, and so the axes are not aligned. If axis alignment is required, you can switch to the cowplot package, which include the function plot_grid() with the argument align. However, the cowplot package doesn’t contain any solution for multi-pages layout.