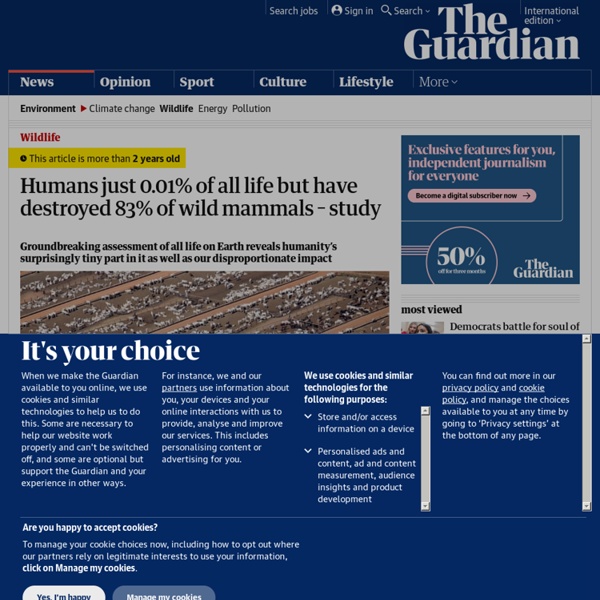 Humankind is revealed as simultaneously insignificant and utterly dominant in the grand scheme of life on Earth by a groundbreaking new assessment of all life on the planet. The world’s 7.6 billion people represent just 0.01% of all living things, according to the study. Yet since the dawn of civilisation, humanity has caused the loss of 83% of all wild mammals and half of plants, while livestock kept by humans abounds. The new work is the first comprehensive estimate of the weight of every class of living creature and overturns some long-held assumptions. Bacteria are indeed a major life form – 13% of everything – but plants overshadow everything, representing 82% of all living matter. All other creatures, from insects to fungi, to fish and animals, make up just 5% of the world’s biomass. Another surprise is that the teeming life revealed in the oceans by the recent BBC television series Blue Planet II turns out to represent just 1% of all biomass. “It is pretty staggering,” said Milo.

Submarine to visit deepest parts of the ocean in Five Deeps Expedition Imagine exploring a place so far from humanity that any message you send takes seven seconds to be heard. That's arguably more remote than the moon — radio waves sent back-and-forth during the Apollo missions took just 2.5 to 2.7 seconds to transmit. But this location isn't in space; it's at the bottom of the sea.

Tricking and treating has a history Over the past few decades, Halloween celebrations have gained in popularity, not only with children and families, but with all those fascinated with the spooky and scary. As a scholar of myth and religion in popular culture, I look at Halloween with particular interest – especially the ways in which today’s Halloween tradition came to evolve. A pre-Christian tradition Many practices associated with Halloween have origins in the pre-Christian, or pagan, religion of the Celts, the original inhabitants of the British Isles, as well as parts of France and Spain. The Celts held a feast called Samhain – a celebration of the harvest, the end of summer and the turn of the year. Samhain was separated by six months from Beltane, an observance of the beginning of summer, which took place on May 1 and is now known as May Day.

Jaywalking: How the car industry outlawed crossing the road Image copyright AP The idea of being fined for crossing the road at the wrong place can bemuse foreign visitors to the US, where the origins of so-called jaywalking lie in a propaganda campaign by the motor industry in the 1920s. The California Vehicle Code states: "No pedestrian shall start crossing in direction of a flashing or steady "DON'T WALK" or upraised hand symbol." It also forbids crossing between controlled intersections, or "jaywalking". Late last year, police began a concerted effort to enforce the rules in central Los Angeles. Pedestrians had been "impeding traffic and causing too many accidents and deaths", one traffic police official said.

Fascinating Chart Details The History of the Alphabet Most of us use the letters of the alphabet everyday, but did you ever stop to wonder how their shapes came to be? The history of the alphabet is fascinating, and each of the 26 letters has its own unique story. Matt Baker (of UsefulCharts) has designed a handy poster that documents the evolution of our familiar alphabet from its ancient Egyptian Proto-Sinaitic roots (c. 1750 BCE) up to present day Latin script. The limited edition Evolution of the Alphabet chart shows how early shapes and symbols eventually morphed to become the ABCs we know today.

When 7-Up was created in 1929 it contained lithium, a mood-stabilizing drug Charles Leiper Grigg was born on May 11, 1868, in Price’s Branch, Missouri. He moved to St. Louis when he was 22-years-old and started working in advertising and sales for soft drink companies. He invented his first soft drink called “Whistle” while he was working for a manufacturing company owned by Vess Jones, but after a conflict with the management, he left the company. He found a job at a new soft drink manufacturer where he invented another orange-flavored drink called “Howdy.” He went on to form the Howdy Company together with financier Edmund G.

List of redheads Figures from the Bible or classical mythology, such as Esau or Judas Iscariot, are included. Characters from modern fiction such as Anne of Green Gables or Ginger Hebblethwaite are not. The term 'Redhead' is also popularized by the American Archie comics where the titular main character, teenager Archie Andrews, has red hair and a Scottish family background. He is often addressed as 'redhead' or 'redheaded junk' by his archrival Reggie Mantle. A[edit] Meet the Rare Swimming Wolves That Eat Seafood They move like ghosts along the shorelines of Canada's Vancouver Island, so elusive that people rarely see them lurking in the mossy forests. British filmmaker Bertie Gregory was one of the lucky ones: He saw coastal wolves—also known as sea wolves—in 2011. "There is something about being in the presence of a coastal wolf—they just have this magic and aura around them," he says. That experience inspired him to return and document the animals for National Geographic’s first YouTube series, wild_life with bertie gregory, which launches August 3. “Coastal wolves are such a unique predator, and they are hunting in this absolutely epic landscape,” says Gregory.