Oxygen Transport and Diffusion. Most of the oxygen that is carried by blood is bound to hemoglobin found in red blood cells (erythrocytes). 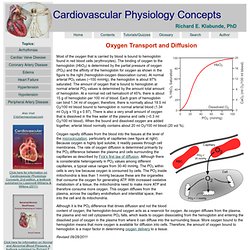 Professor discusses physics of granular materials at AAAS meeting. Pour sand from a bucket and it flows like a liquid, but stand on it and it supports weight like a solid. 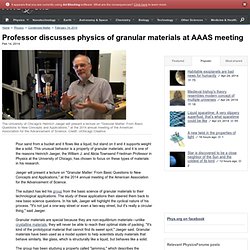 This unusual behavior is a property of granular materials, and it is one of the reasons Heinrich Jaeger, the William J. and Alicia Townsend Friedman Professor in Physics at the University of Chicago, has chosen to focus on these types of materials in his research. Jaeger will present a lecture on "Granular Matter: From Basic Questions to New Concepts and Applications," at the 2014 annual meeting of the American Association for the Advancement of Science.

The subject has led his group from the basic science of granular materials to their technological applications. The study of these applications then steered them back to new basic science questions. The physics of curly hair: Researchers develop first detailed model for a 3-D strand of curly hair. The heroes and villains in animated films tend to be on opposite ends of the moral spectrum. 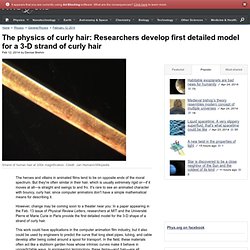 But they're often similar in their hair, which is usually extremely rigid or—if it moves at all—is straight and swings to and fro. It's rare to see an animated character with bouncy, curly hair, since computer animators don't have a simple mathematical means for describing it. However, change may be coming soon to a theater near you: In a paper appearing in the Feb. 13 issue of Physical Review Letters, researchers at MIT and the Université Pierre et Marie Curie in Paris provide the first detailed model for the 3-D shape of a strand of curly hair. This work could have applications in the computer animation film industry, but it also could be used by engineers to predict the curve that long steel pipes, tubing, and cable develop after being coiled around a spool for transport.

Understanding a novel form of turbulence. French researchers from CNRS have provided solutions to important problems related to turbulent flow in stratified systems such as the oceans and the atmosphere. 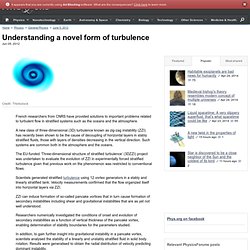 A new class of three-dimensional (3D) turbulence known as zig-zag instability (ZZI) has recently been shown to be the cause of decoupling of horizontal layers in stably stratified fluids, those with layers of densities decreasing in the vertical direction. Such systems are common both in the atmosphere and the oceans. Breaking deep-sea waves reveal mechanism for global ocean mixing. (Phys.org) —Waves breaking over sandy beaches are captured in countless tourist photos. 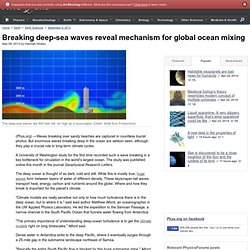 But enormous waves breaking deep in the ocean are seldom seen, although they play a crucial role in long-term climate cycles. A University of Washington study for the first time recorded such a wave breaking in a key bottleneck for circulation in the world's largest ocean. Drawfacts #3: What is Blackbody radiation? Flexible, stretchable fire-ant rafts. What do Jell-O, toothpaste, and floating fire-ant rafts have in common? 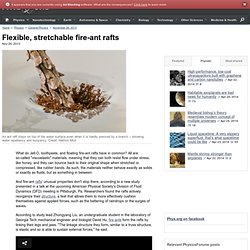 All are so-called "viscoelastic" materials, meaning that they can both resist flow under stress, like honey, and they can bounce back to their original shape when stretched or compressed, like rubber bands. As such, the materials neither behave exactly as solids or exactly as fluids, but as something in between. Bottom-up insight into crowd dynamics. Stampedes unfortunately occur on too regular a basis. 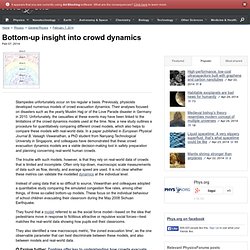 Previously, physicists developed numerous models of crowd evacuation dynamics. Their analyses focused on disasters such as the yearly Muslim Hajj or of the Love Parade disaster in Germany in 2010. Unfortunately, the casualties at these events may have been linked to the limitations of the crowd dynamics models used at the time. BERNOULLI CONE - TAMIL - 12MB.avi. Invention stops gun wound bleeds in 15 seconds. When soldiers become injured, time is of the essence. 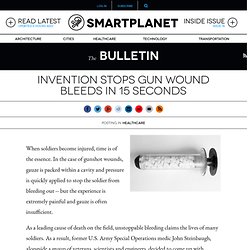 In the case of gunshot wounds, gauze is packed within a cavity and pressure is quickly applied to stop the soldier from bleeding out -- but the experience is extremely painful and gauze is often insufficient. As a leading cause of death on the field, unstoppable bleeding claims the lives of many soldiers. As a result, former U.S. Army Special Operations medic John Steinbaugh, alongside a group of veterans, scientists and engineers, decided to come up with something more effective. The group, Oregon-based startup RevMedx, created XStat, a modified syringe which injects small, rapidly-expanding sponges into a wound cavity. To make sure no sponges are left inside the body accidentally, X-shaped markers ensure each sponge is visible on x-ray images. In testing, it takes just 15 seconds for the sponges to cover an entire wound and create enough pressure to stop the bleeding. The U.S. Via: PopSci. Fundamental Concepts of Fluid Flow & Fluid Statics ,Fluid Mechanics ,NPTEL IIT Bombay courses video tutorials and Lectures. 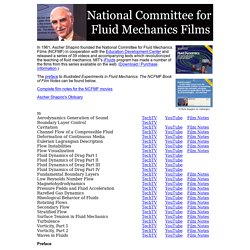 Troilus and Cressida This volume contains text and photographic material related to the sound films prepared under the direction of the National Committee for Fluid Mechanics Films (NCFMF). The films, and the related text material herein, cover nearly all of the fundamental phenomena of fluid motions. Each chapter of this volume is based on the script of a particular film. How the self-IPO is a product of our times. Budding entrepreneurs: have a great business idea but lack funds or have debt? 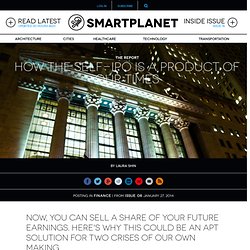 Duggal believes there's a significant amount of money to be made from investing in women-led startups. Sustainable Solar Sanitation System profile. Georgia Institute of Technology This team is addressing the issue of sanitation in developing countries through the development of a dry latrine system that provides sustainable, affordable, and safe treatment of human waste using the sun’s energy. While some dry (waterless) latrines are already being marketed, a system has yet to be developed that effectively inactivates Ascaris cysts, which present a major health risk to people in communities with inadequate sanitation facilities. The team is working to create a latrine that captures both solid and liquid wastes, provides space to store solid waste for a specified time, exposes it to concentrated sunlight in order to deactivate and kill all pathogenic organisms, and then uses the deactivated waste as fertilizer in a revenue-generating microenterprise. Back to complete list of Open Minds 2011 teams.

LyoGo profile. Purdue University In developing countries there is an extreme shortage of healthcare workers capable of giving injections safely and little infrastructure to transport liquid drugs that have to be refrigerated. As a result, 24 million cases of hepatitis, HIV, and other diseases are spread by unsafe needle practices each year, and five million children die because they live in reduced infrastructure villages with little or no refrigeration to keep vaccines or other medicines cold.

This team, called LyoGo, is developing a device that makes it easy to distribute, administer, and dispose of medicine around the world. Medici Medical Technologies Profile. Duke University Medici develops innovative devices to restore control to women suffering from urinary incontinence (UI). Twenty-eight million Americans suffer from UI, and most see little improvement in their conditions despite $20 billion spent annually on this problem. InfantAIR profile. Rice University Respiratory failure is a leading cause of infant morbidity and mortality in the developing world.

Conditions that compromise respiratory function, including prematurity, birth asphyxia, and infection account for a large percentage of the 4.9 million neonatal deaths that occur annually in developing countries. In order to decrease infant mortality, there is a need for appropriate, durable, low-cost, high-functioning equipment to treat infants and small children with respiratory distress. Antenatal Screening Kit profile.

Eye Cells Made with Ink-Jet Printer. Ink-jet printing technology could be a way to build new tissue meant to restore vision to people suffering from common forms of blindness due to retinal degeneration. Viscosity. The Relationship Between Blood Pressure and Blood Viscosity. Viscosity. Lesson Plan: Fluid Mechanics and Statics. HyperPhysics.