SlidePoint - Online Presentations that Do Not Require Flash! 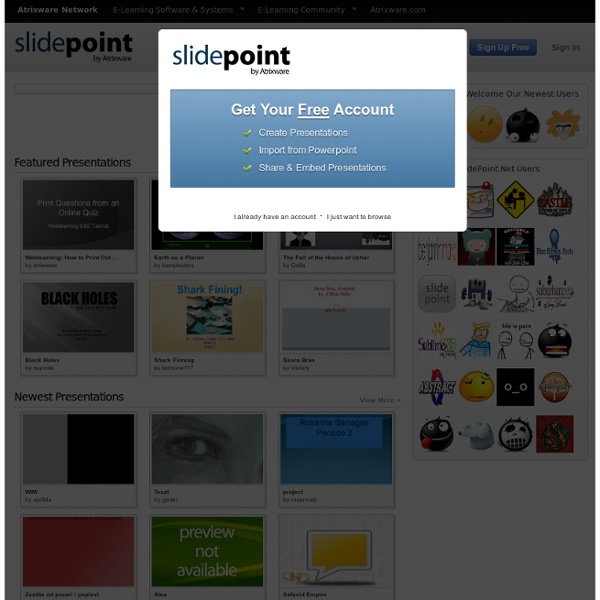 Can Mobile Phones Help Teachers Manage Classroom Behavior? Digital Tools We can talk all we want about what students should learn in the classroom. But the reality is that most teachers have to balance “academics” with a multitude of other lessons: how to be good students, how to be good citizens, and simply how to behave. Behavior management is actually a significant part of what teachers have to do every day, and while there’s a wealth of information to help them with tips and tricks, there isn’t a lot of technology in place to help them with the implementation of best practices. The startup isn’t just interested in “gamifying” good behavior. There may be a solution with the use of tech — at least that’s what ClassDojo founder Sam Chaudhary believes. Currently, ClassDojo lets teachers track students’ behaviors with an easy +1 or -1 system — you can reward students for good behavior (participation, helping others, creativity, insight) or you can make note of negative behaviors (disruption, disrespect, tardiness). Related

Visions of Mobile Learning Devices | Feature Visions of Mobile Learning It's been just a couple of years since the first mobile device hit the market. Many years down the road, I envision a device that isn't mobile per se, but located in every classroom. The ideal mobile learning device resembles a credit card after being folded four times. Imagine a personal learning environment in the palm of your hand. Future mobile devices will be interactive with a three-dimensional touchscreen that projects the screen into the air in front of the user for manipulation. The device will fit in a pocket and have multiple inputs to cover any need. The "Ubique" mobile device is credit card-sized, waterproof, shock-resistant, and indestructible, with long battery life and solar power capability. It will have to be durable, rugged, and portable with about a 5- to 7-inch screen, forward and backward cameras, flash memory, and AV in/out with adapters for various display systems. It will be an off-the-shelf smartphone.

Social Media Best Practices: 12 Tips for Making the Best of Facebook, Twitter, Google + or Any Other Social Site Do you know how many of your supporters use popular social networks like Google+, Facebook, Twitter and YouTube? Twitter has more than 16 million users, and 42.3 percent of the entire American population is on Facebook. YouTube is the second most used search engine in the world. With usage stats like that it’s probably safe to assume that a large portion of your supporters, customers and/or prospects use at least one of these sites on a regular basis, right? Which means you need to get laser focused on figuring out how to best utilize sites like Facebook, Twitter, Google+ and YouTube. But as with anything, it can be challenging to figure out where to start or how to ensure your efforts are going to be effective. With that in mind, here are 12 tips that will help you succeed no matter what social-networking site you apply them to. The social Web is essentially a place where relationships are built, maintained and enhanced in a digital space. What one tip would you add?

Records show how Ann Arbor public schools are dealing with cyberbullying In May, Ann Arbor public schools moved to cut off wireless access for students using smartphones and other devices, citing the potential for cyberbullying as one reason. An AnnArbor.com review of school district documents obtained through the Freedom of Information Act shows officials are increasingly concerned with cyberbullying involving students — with some of the conflict spilling over from the Web into classrooms. Sixteen incidents of cyberbullying or violations of the district's computer usage policy were reported in district schools in the 2010-11 school year, documents show. Meanwhile, district officials have been attending conferences and training sessions to prepare themselves to handle cyberbullying. District spokeswoman Liz Margolis said it wasn't immediately possible to compare the number of this school year's cyberbullying incidents with the previous year's, but she said it's likely the number increased due to greater awareness and reporting of the problem.

6 ways to use mobile learning in your class today 1. Record your lecture and upload it as a podcast. Share the link with your students to use while studying or for reference. 2. Share your number with your students and ask them to message any questions that they have while reviewing the lesson. You can answer the salient questions in the next class or direct them as to where they can find the answers. 3. 4. 5. 6. Short quizzes, important equations, and definitions can be easily emphasised by creating simple content and pushing this material to student phones using mobile learning applications like MOBL21. For more ideas on how to incorporate mobile learning in your classroom click here. Image Credit: JeanbaptisteM No related posts.

In Digital Age, Schools That Succeed are Schools That Connect School of One in New York City leverages technology throughout the school day. A few months ago, I posted an article by Shelly Blake-Plock called 21 Things in Education That Will be Obsolete in 2020, which lists some of the ways in which the face of schools will change in less than a decade. In this op-ed, which originally appeared in the Baltimore Sun, he describes what exactly needs to be done to get to there. By Shelly Blake-Plock Michelle Rhee is back in town. This time it is as a “grass-roots” activist who only wants to put children first. As a teacher and as a parent of three public school students, I look at the type of change they are advocating for and I see the future of failure. Plenty of wealthy schools are deciding not to make the connection, while many teachers in cash-strapped schools are pursuing a real grass-roots effort to make it happen. Foremost are the effects of the “digital divide.” The second crack is evident in those classrooms with technology. Related