National Oceanic and Atmospheric Administration - NOAA: Past Decade Warmest on Record According to Scientists in 48 Countries. Earth has been growing warmer for more than fifty years July 28, 2010. 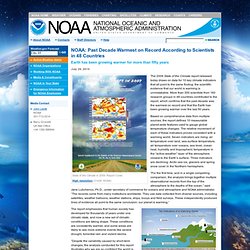 What has global warming done since 1998? To claim global warming stopped in 1998 overlooks one simple physical reality - the land and atmosphere are just a small fraction of the Earth's climate (albeit the part we inhabit). 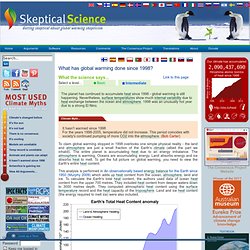 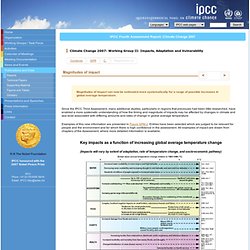 Since the IPCC Third Assessment, many additional studies, particularly in regions that previously had been little researched, have enabled a more systematic understanding of how the timing and magnitude of impacts may be affected by changes in climate and sea level associated with differing amounts and rates of change in global average temperature. Examples of this new information are presented in Figure SPM.2. Entries have been selected which are judged to be relevant for people and the environment and for which there is high confidence in the assessment. All examples of impact are drawn from chapters of the Assessment, where more detailed information is available. 2011: The 9th hottest year on record. The 10 Dumbest Things Ever Said About Global Warming. Australia has warmest year on record: BoM. The Bureau of Meteorology announced Australians have experienced the hottest 12 months on record. 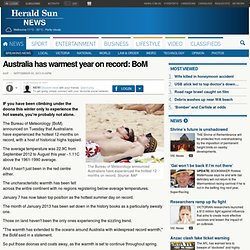 Source: AAP IF you have been climbing under the doona this winter only to experience the hot sweats, you're probably not alone. The Bureau of Meteorology (BoM) announced on Tuesday that Australians have experienced the hottest 12-months on record, with a host of historical highs toppled. The average temperature was 22.9C from September 2012 to August this year - 1.11C above the 1961-1990 average. And it hasn't just been in the red centre either. David Rose's climate science - half truths and bias.

24 May 2011, 14:00Verity David Rose, writing in the Mail on Sunday over the weekend, criticised the science behind the government's decision on carbon budgets, which committed the UK to halving emissions of carbon dioxide by 2025. 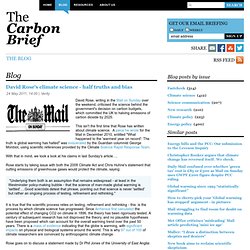 This isn't the first time that Rose has written about climate science. A piece he wrote for the Mail in December 2010, entitled "What happened to the 'warmest year on record': The truth is global warming has halted" was eviscerated by the Guardian columnist George Monbiot, using scientific references provided by the Climate Science Rapid Response Team. With that in mind, we took a look at his claims in last Sunday's article…. Latest myth from the Mail on Sunday: Arctic ice has returned. CO2 lags temperature - what does it mean? Over the last half million years, our climate has experienced long ice ages regularly punctuated by brief warm periods called interglacials.

Atmospheric carbon dioxide closely matches the cycle, increasing by around 80 to 100 parts per million as Antarctic temperatures warm up to 10°C. However, when you look closer, CO2 actually lags Antarctic temperature changes by around 1,000 years. While this result was predicted two decades ago (Lorius 1990), it still surprises and confuses many. The human fingerprint in global warming. Surface Temperature Change Back in 1988, NASA's James Hansen made some of the first projections of future global warming with a global climate model (Hansen 1988). 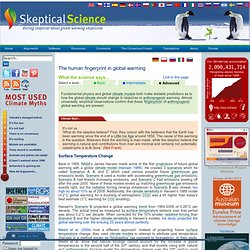 He created 3 scenarios which he called Scenarios A, B, and C which used various possible future greenhouse gas emissions levels. Scenario A used a model with accelerating greenhouse gas emissions, Scenario B had linearly increasing emissions, and Scenario C had emissions leveling off after the year 2000. What were climate scientists predicting in the 1970s? Mainstream Media What was the scientific consensus in the 1970s regarding future climate? Wood for Trees: Interactive Graphs. Solar activity & climate: is the sun causing global warming? It's often considered "common sense" that global warming is caused by the Sun. 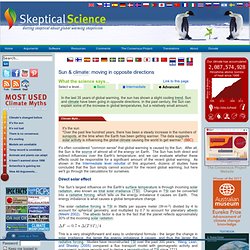 After all, the Sun is the source of almost all of the energy on Earth. The Sun has both direct and indirect influences over the Earth's temperature, and we can evaluate whether these effects could be responsible for a significant amount of the recent global warming. As shown in the Intermediate level rebuttal of this argument, dozens of studies have concluded that the Sun simply cannot account for the recent global warming, but here we'll go through the calculations for ourselves. Direct solar effect. David Rose Hides the Rise in Global Warming. Posted on 19 March 2013 by dana1981, John Russell, John Mason It seems like we have to debunk this myth on a weekly basis, as it keeps popping up in the mainstream media. 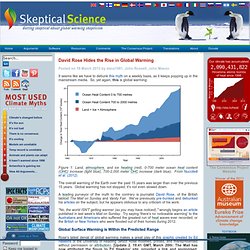 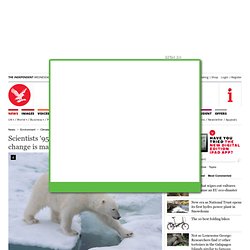 According to a draft of the report, the certainty that humans are the main cause of climate change has risen to 95 per cent, from 90 per cent in the previous - fourth - assessment six years ago. This, in turn, was a significant increase on the 66 per cent certainty reached in 2001’s third assessment and just over 50 per cent in 1995. With every IPCC report there is a key phrase that encapsulates the latest consensus on climate change, which scientists wrangle over for months. Doomsday Pending? James Lovelock on The Hour. Obama's Climate Challenge. Met Office in the Media: 29 January 2012. Today the Mail on Sunday published a story written by David Rose entitled “Forget global warming – it’s Cycle 25 we need to worry about”. 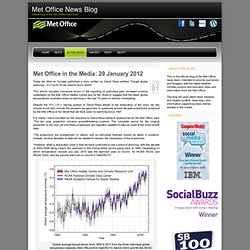 ArcticEscalator2012_med.gif (GIF Image, 500 × 340 pixels) Why the City of Miami Is Doomed to Drown. Arctic sea ice delusions strike the Mail on Sunday and Telegraph. When it comes to climate science reporting, the Mail on Sunday and Telegraph are only reliable in the sense that you can rely on them to usually get the science wrong. This weekend's Arctic sea ice articles from David Rose of the Mail and Hayley Dixon at the Telegraph unfortunately fit that pattern. Both articles claimed that Arctic sea ice extent grew 60 percent in August 2013 as compared to August 2012. While this factoid may be technically true (though the 60 percent figure appears to be an exaggeration), it's also largely irrelevant. For one thing, the annual Arctic sea ice minimum occurs in September – we're not there yet. Renewable energy is too expensive. When you account for the effects which are not reflected in the market price of fossil fuels, like air pollution and health impacts, the true cost of coal and other fossil fuels is higher than the cost of most renewable energy technologies.

Due to its abundance and low market price, coal combustion is the largest source of energy production in the world, accounting for 40% of all electricity worldwide. In the USA it accounts for 45% of electricity generation, and approximately 75% in Australia. Unfortunately, coal combustion is a major contributor to global greenhouse gas emissions as well, accounting for 30% of total anthropogenic carbon dioxide (CO2) emissions worldwide, and 72% of CO2 emissions from global power generation. In addition, non-power generation uses increase its contribution to global human CO2 emissions to a whopping 41% (as of 2005). Many people prefer coal combustion to renewable energy because it seems to be cheaper. The day The Australian's reporters stopped writing lies. While temperatures rise, denialists reach lower. Over the weekend, two amazingly bad articles were published about climate change.

Both were loaded with mistakes, misinterpretations, and outright misinformation, and are simply so factually wrong that they almost read like parodies. Just so we’re clear here. Updated comparison of simulations and observations. Now that 2012 is over, it is time to update a comparison of simulations and observations of global mean temperatures. [UPDATE (17/03/13): David Rose has written an article in the Mail on Sunday which, by eye, seems to use the top left panel from the figure below, but without mention of its original source. Global Surface Temperature: Going Down the Up Escalator, Part 1. Posted on 5 November 2011 by dana1981. Scientific opinion on climate change. Global mean land-ocean temperature change from 1880–2012, relative to the 1951–1980 mean. Monckton requires religious certification for scientists? Arctic sea-ice 'growth', a manufactured IPCC 'crisis' and more: David Rose is at it again. Arctic sea ice delusions strike the Mail on Sunday and Telegraph.

Yale Environment 360: Opinion, Analysis, Reporting & Debate. Allan Savory’s TED talk is wrong, and the benefits of holistic grazing have been debunked. Photo by Vyacheslav Oseledko/AFP/Getty Images When Allan Savory finished his TED talk early last month, foodies worldwide collectively salivated. In roughly 22 minutes, Savory, a biologist and former member of the Rhodesian Parliament, challenged the conventional wisdom blaming livestock for the degradation of global grasslands into hardpan deserts. It has long been a basic tenet of environmentalism that 10,000 years of overgrazing has caused this desertification. Environmentalists insist that to restore degraded landscapes, we must reduce the presence of cattle, eat less meat, and allow ecosystems to repair themselves. Savory, who admits that he’s suggesting “the unthinkable,” wants humans to do the exact opposite: Add cattle to the deserts, manage them with obsessive precision, and eat more meat.