The Gross Gatherings. Cheryl Watson lives in the house where she grew up and doesn't want to leave. 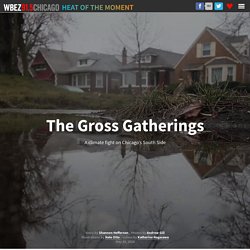 But regular and relentless flooding, exacerbated by climate change, is destroying her home. She lives in the Chatham neighborhood, a place long known as the jewel of Chicago’s South Side. Back in the 1950s, when Watson was a little girl, something about this place felt special to her; it was full of black-owned businesses and perfectly manicured lawns.

“Everyone knew each other for miles around. The churches were teeming with residents. But in a segregated city like Chicago, Chatham had to fight to get what it needed. Perhaps because everything was so hard won, people took a lot of pride in their homes. But holding on to her home may not be easy. Climate change has dropped off the political radar (and this is a big problem) - The Drum. Opinion Posted The aversion to talking about climate change during the election campaign reflects a wider problem: our concern for this issue has fallen even while it has become larger and more urgent, writes Mike Steketee. 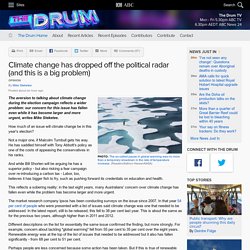 How much of an issue will climate change be in this year's election? Not a major one, if Malcolm Turnbull gets his way. He has saddled himself with Tony Abbott's policy as one of the costs of appeasing the conservatives in his ranks. The Science. “If humanity wishes to preserve a planet similar to that on which civilization developed and to which life on Earth is adapted, paleoclimate evidence and ongoing climate change suggest that CO2 will need to be reduced from [current levels] to at most 350 ppm.”Dr. 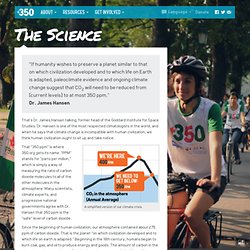 James Hansen That’s Dr. James Hansen talking, former head of the Goddard Institute for Space Studies. Climate change rallies held across Australia urge Tony Abbott to act now. Tens of thousands of people have attended climate change rallies across Australia, in the first leg of a global wave of protests calling for tougher action to reduce greenhouse gas emissions ahead of the UN climate summit in New York next week. 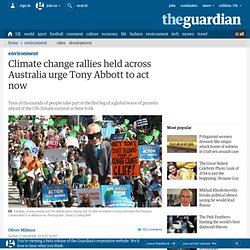 The main People’s Climate March rally was held in Melbourne on Sunday, with Victoria police estimating at least 10,000 attended. Organisers put the figure closer to 20,000, with families, young people and the elderly making the most of the sunshine to urge the prime minister, Tony Abbott, to do more to tackle climate change. There were also marches in Sydney, Canberra, Adelaide, Brisbane, Perth, Newcastle and Darwin. The rallies, along with gatherings in cities across south-east Asia and Europe, are a prelude to what is expected to be a 100,000-strong climate march in New York. Protesters at the Australian rallies, organised by 350.org and activist group GetUp, denounced the Coalition government’s axing of the carbon price. The best place to begin is here and now. Climate change protests: Australians join global push for action ahead of UN climate summit. Updated. 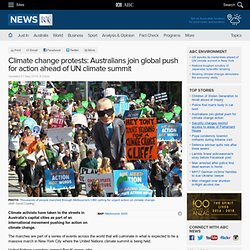 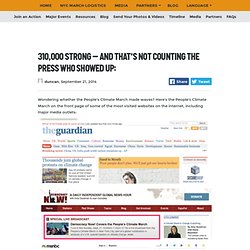 Here’s the People’s Climate March on the front page of some of the most visited websites on the internet, including major media outlets: People's Climate March: thousands demand action around the world - as it happened. Emma Thompson, who has recently returned from a trip to the Arctic with Greenpeace, has been talking to Andrew Marr on the BBC. 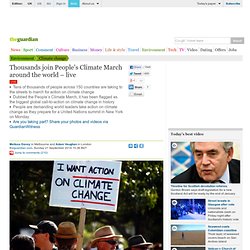 Marr asks what concerns her most about climate change. “I’ll tell you exactly what it was, it’s the water marks left by the glacial mess the sides of the valleys where they were once great... You forget that glaciers retreat but they also lose mass,” she says. 30,000 rally in Melbourne and more in regional Victoria for action on climate change. A beautiful spring day brought out the crowds to attend the Peoples Climate Melbourne rally. 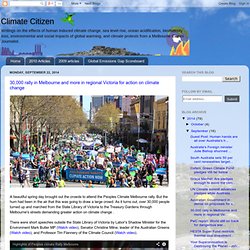 But the hum had been in the air that this was going to draw a large crowd. As it turns out, over 30,000 people turned up and marched from the State Library of Victoria to the Treasury Gardens through Melbourne's streets demanding greater action on climate change . There were short speeches outside the State Library of Victoria by Labor's Shadow Minister for the Environment Mark Butler MP (Watch video), Senator Christine Milne, leader of the Australian Greens (Watch video), and Professor Tim Flannery of the Climate Council (Watch video). Pacific Warriors also did a war dance to the crowd, although most in the swelling throng could barely see the dance performed. Even from my vantage point several metres away I only caught the tops of their heads due to the circle of photographers and TV cameras. My photos from the event: Greens Senator Richard Di Natale attended and spoke at the Geelong rally. 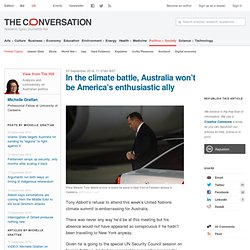 There was never any way he’d be at this meeting but his absence would not have appeared so conspicuous if he hadn’t been travelling to New York anyway. Given he is going to the special UN Security Council session on foreign fighters, he had no reasonable excuse for missing the climate summit. He could easily have left Australia a little earlier and been there, along with more than 100 leaders, including Barack Obama and Britain’s David Cameron (though neither China nor India is being represented at leader level). Abbott has spread his wings on the international stage recently, but this doesn’t extend to the climate issue. Climate Change - Journalist's Resource Journalist's Resource: Research for Reporting, from Harvard Shorenstein Center. Climate change report: prevent damage by overhauling global economy.

The world can still act in time to stave off the worst effects of climate change, and enjoy the fruits of continued economic growth as long as the global economy can be transformed within the next 15 years, a group of the world's leading economists and political leaders will argue on Tuesday. 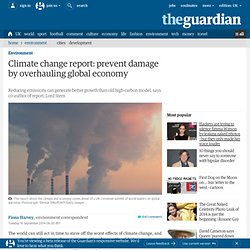 Tackling climate change can be a boon to prosperity, rather than a brake, according to the study involving a roll-call of the globe's biggest institutions, including the UN, the OECD group of rich countries, the International Monetary Fund and the World Bank, and co-authored by Lord Stern, one of the world's most influential voices on climate economics. The report comes ahead of a UN-convened summit of world leaders on global warming next week at which David Cameron has pledged to lead calls for strong action. "Reducing emissions is not only compatible with economic growth and development – if done well it can actually generate better growth than the old high-carbon model," said Stern. REDD - Warsaw Framework for REDD-plus.

Power Failure: the Inside Story of Climate Policy under Rudd and Gillard - RN Breakfast. Climate Change Hunger: World Leaders Must Act  Discussions on curbing greenhouse gas emissions always seem to proceed excruciatingly slowly, as climate change is forever being brushed aside as a far off concern for a distant future. They fail time and again because politicians of all stripes pay more attention to the short-term horizon of the next election than the world future generations will live in. Future generations - after all - cannot vote. Climate Change You Can Believe In  Previously published on BillMoyers.com Just as Sunday's big People's Climate March and next week's UN global summit on climate converge here in New York City, the nation and world are experiencing weather of an intensity that should rattle the stubborn false convictions of even the most fervent climate change denier.

First summit on women and climate decries lack of grassroots funding. Women wade across the flooded Shebelle River in Jowhar for higher ground north of Somalia's capital Mogadishu, Dec. 6, 2013. REUTERS/Omar Faruk BALI, Indonesia (Thomson Reuters Foundation) – A global summit on women and climate, the first of its kind, opened on Sunday, bringing together some 80 activists working on women’s rights, climate change and natural resources, in a bid to build alliances and raise the profile of female environmental leaders. Experts have long said women and children, especially in developing countries, are most vulnerable to the effects of climate change, and are disproportionately affected. EDGAR Overview. Www.wmo.int/pages/prog/arep/documents/ant-bulletin-2-2014.pdf. Steve Sherwood, Director, Climate Change Research Centre UNSW and lead author of IPCC Assessment Report 5, Chapter 7 'Clouds and Aerosols' - RN Breakfast.

Experts say that it is important that climate finance actually reaches Uganda’s communities and addresses the drivers of deforestation and degradation. Credit: Wambi Michael/IPS - As the ink dries on a 3.6 million dollar agreement between Uganda and the World Bank to support the country’s preparations for REDD, some analysts are pessimistic over the mechanism’s potential. REDD (reducing emissions from deforestation and degradation) was formally agreed to at the United Nations Framework Convention on Climate Change (UNFCCC) negotiations in Bali, Indonesia in 2007.

'Bigger threat than terrorism': Barack Obama signals Australia, India and China must improve on climate change. Australia’s economic and political strategy: Deny climate change. Australia over the past 24 hours has made its intentions clear to the world: Climate change is not a significant issue, and nothing will derail its goal to fully exploit its coal and gas reserves. That is the inescapable conclusion of the Abbott government’s green paper on energy – supposedly designed to provide a long-term blueprint of Australia’s energy future, and of its message to the UN-sponsored climate summit in New York. GCP : Global Carbon Project : Homepage. Tokyo Climate Center Home Page. Climate at a Glance: Time Series. Climate Action Network Australia. Record Greenhouse Gas Levels Impact Atmosphere and Oceans. Carbon Dioxide Concentration Surges Geneva, 9 September 2014 (WMO) – The amount of greenhouse gases in the atmosphere reached a new record high in 2013, propelled by a surge in levels of carbon dioxide.

This is according to the World Meteorological Organization’s annual Greenhouse Gas Bulletin, which injected even greater urgency into the need for concerted international action against accelerating and potentially devastating climate change. The Greenhouse Gas Bulletin showed that between 1990 and 2013 there was a 34% increase in radiative forcing – the warming effect on our climate – because of long-lived greenhouse gases such as carbon dioxide (CO2), methane and nitrous oxide.

WG1AR5_SPM_FINAL.pdf. 'Time is not on our side’ says World Meteorological Organization chief   - UN Climate Summit 2014. Ited Nations and Climate Change. Leo vs. science: vanishing evidence for climate change. Joint statement on the health effects of coal in Australia - Climate Council. The Climate Council of Australia collects your personal information when you make a donation to support our work.