USA Torture and Crimes Against Humanity

A Crime Against Humanity: Dr. Deborah Birx Admits Trump's Campaign Distracted from Covid Response. — from Salon Is playing politics with a deadly pandemic a crime against humanity? 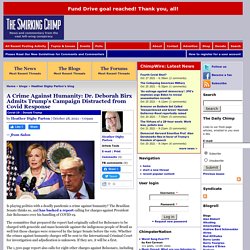 The Brazilian Senate thinks so, and has backed a report calling for charges against President Jair Bolsonaro over his handling of COVID-19. The committee that prepared the report had originally called for Bolsonaro to be charged with genocide and mass homicide against the indigenous people of Brazil as well but those charges were removed by the larger Senate before the vote. Whether the crimes against humanity charges will be sent to the International Criminal Court for investigation and adjudication is unknown. If they are, it will be a first. The 1,300-page report also calls for eight other charges against Bolsonaro, including misuse of public funds and spreading fake news about the pandemic as well as falsification of documents and incitement to crime, which they referred to Brazil's top prosecutor, an ally of the president who is unlikely to prosecute. 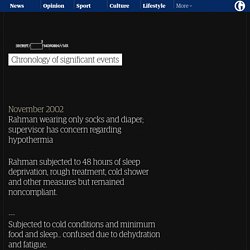 Words by Larry Siems There were 20 cells inside the prison, each a stand-alone concrete box. In 16, prisoners were shackled to a metal ring in the wall. In four, designed for sleep deprivation, they stood chained by the wrists to an overhead bar. Chilling role of 'the Preacher' confirmed at CIA waterboarding hearing in Guantánamo. There were three men authorised by the CIA to carry out waterboarding on detainees in America’s “war on terror”. 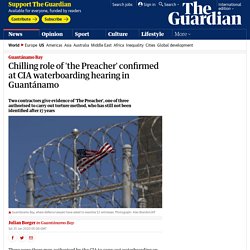 Two of them were contractors who are in Guantánamo Bay this week to give evidence. Detainees Describe an American Presence in Their Torture Chambers. US halts cooperation with UN on potential human rights violations. The Trump administration has stopped cooperating with UN investigators over potential human rights violations occurring inside America, in a move that delivers a major blow to vulnerable US communities and sends a dangerous signal to authoritarian regimes around the world. 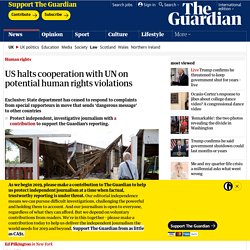 Quietly and unnoticed, the state department has ceased to respond to official complaints from UN special rapporteurs, the network of independent experts who act as global watchdogs on fundamental issues such as poverty, migration, freedom of expression and justice. There has been no response to any such formal query since 7 May 2018, with at least 13 requests going unanswered. The harsh interrogations of al-Qaeda detainees: Was it ‘torture’ and did it help find bin Laden? Inside the CIA’s black site torture room. The city fit for no-one. Cameroonian Troops Tortured and Killed Prisoners at Base Used for U.S. Drone Surveillance. Troops in the West African nation of Cameroon have tortured prisoners at a remote military base that is also used by U.S. personnel and private contractors for drone surveillance and training missions. 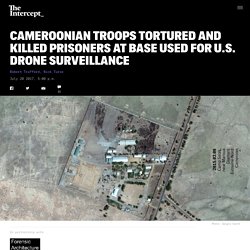 As the U.S. military has fortified the Cameroonian site, known as Salak, and supported the elite local troops based there, the outpost has become the scene of illegal imprisonment, brutal torture, and even killings, according to a new investigation by The Intercept and the Goldsmiths, University of London-based research firm Forensic Architecture, based on extensive research by Amnesty International. Nearly 60 victims held at Salak described to Amnesty International how they were subjected to water torture, beaten with electric cables and boards, or tied and suspended with ropes, among other abuses. Psychologists Open a Window on Brutal C.I.A. Interrogations - The New York Times. Trump administration suppresses CIA torture report - NationofChange. In yet another reversal of former President Barack Obama’s decisions, the Trump administration has begun returning copies of the 6,700-page CIA torture report in accordance with Senate Intelligence Committee Chair Richard Burr’s demands. 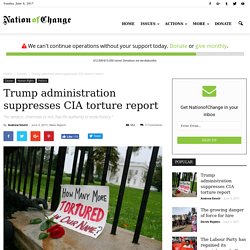 Instead of upholding transparency, Trump has taken steps to erase the human rights violations committed by the Central Intelligence Agency from the annals of history. In December 2014, the Senate Select Committee on Intelligence released the executive summary on the CIA’s Rendition, Detention, and Interrogation (RDI) program. According to the summary, the CIA repeatedly lied to the Committee regarding prisoners’ deaths, the backgrounds of CIA interrogators, threats to detainees’ family members, and the effectiveness of torture. Under pseudonyms within the heavily redacted report, two retired Air Force psychologists, Dr.

Bruce Jessen and Dr. Log In - New York Times. The Art—and Anger—of Japanese Internment Camp Silk Screeners. In the late 1930s, Michihiko Wada—Mike to his friends and family—graduated from the University of Redlands, in California, and headed east to study engineering. 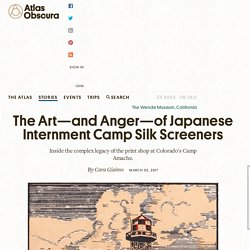 Wada, a slim man with an easy smile, left most of his family—his parents, his sisters—out West. He began building his own life in New York, earning his graduate degree and setting off on what looked to become a promising career. But then, in February of 1942, President Franklin D. Roosevelt issued Executive Order 9066. One by one, Wada’s family members received arrest warrants.

Mike left his job in New York and headed back home, where he too was shipped off to an internment camp. There, he temporarily changed careers. Crimes Against Humanity: Why Is Henry Kissinger Walking Around Free? Two months ago, hundreds of thousands of Chileans somberly marked the 40th anniversary of their nation’s September 11th terrorist event. 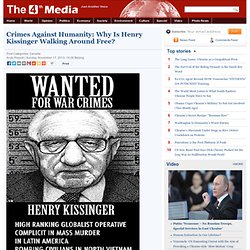 It was on that date in 1973 that the Chilean military, armed with a generous supply of funds and weapons from the United States, and assisted by the CIA and other operatives, overthrew the democratically-elected government of the moderate socialist Salvador Allende. Obama’s Grotesque Hypocrisy over Cluster Munitions. I remember a visit to Laos in 1995. 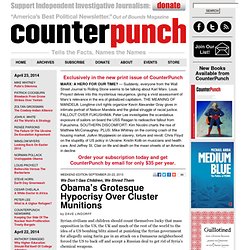 It had been over two decades since the US had been relentlessly bombing that small peasant country day and night, primarily with anti-personnel bombs, and the country seemed to have returned to its tranquil past. But walking around the sleepy capital city of Vientiane, I was puzzled at seeing a surprising number of young children of varying ages hobbling around on crutches with one and sometimes parts of two legs missing, or arms missing, often with faces disfigured.

I asked a Lao official why there were so many such kids, and he explained they were victims of the “bombis” — small fragmentation bomblets dropped by US forces in the secret war on Laos that had not exploded, and that remained buried in farmers’ fields until found or inadvertently disturbed by peasants or, more often, children working or playing. In Their Own Words: CIA Cables Document Agency’s Torture of Abu Zubaydah. For 20 days in 2002, the CIA interrogated Abu Zubaydah at a secret “black site” prison in Thailand, believing him to be a top al-Qaida operative with information about impending attacks on the United States. 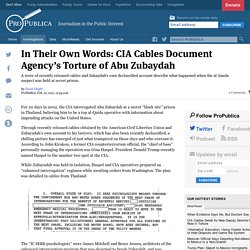 Through recently released cables obtained by the American Civil Liberties Union and Zubayadah’s own account to his lawyers, which has also been recently declassified, a chilling picture has emerged of just what transpired on those days and who oversaw it. According to John Kirakou, a former CIA counterterrorism official, the “chief of base” personally managing the operation was Gina Haspel. CIA Cables Detail Its New Deputy Director’s Role in Torture. On Feb. 22, 2017, ProPublica published a story that inaccurately described Gina Haspel’s role in the treatment of Abu Zubaydah, a suspected al-Qaida leader who was imprisoned by the CIA at a secret “black site” in Thailand in 2002. The story said that Haspel, a career CIA officer who President Trump has nominated to be the next director of central intelligence, oversaw the clandestine base where Zubaydah was subjected to waterboarding and other coercive interrogation methods that are widely seen as torture. The story also said she mocked the prisoner’s suffering in a private conversation.

Neither of these assertions is correct and we retract them. Nine young children killed: The full details of botched US raid in Yemen - The Bureau of Investigative Journalism. Relatives of people killed in the raid gather in one of the decimated houses. Photo by Nasser al Sane Planned for months, it was decided over dinner. The raid on a village in rural Yemen reportedly aimed to capture or kill one of the world’s most dangerous terrorists and deliver a stinging blow to al Qaeda in the Arab Peninsula (AQAP), a militant network the US had been trying to dismantle for more than a decade. The collection of small brick houses in Yemen’s dusty central region was home to civilian families as well as militants and was heavily-guarded, meaning a precise, well-practiced operation was paramount.

Intense surveillance was carried out for weeks, rehearsals took place in Djibouti, and Navy SEALS awaited the go-ahead from their commander-in-chief. Log In - New York Times. Log In. Log In - New York Times. Pentagon Program Trained Foreign Torturers & Rapists. Foreign officers who attended top Pentagon schools were later accused of rape, murder, genocide, and coups, according to State Department reports. By Lauren Chadwick, Center for Public Integrity The Defense Department trained at least 17 high-ranking foreigners at some of its top schools who were later convicted or accused of criminal and human rights abuses in their own countries, according to a series of little-noticed, annual State Department reports to Congress.

Those singled out in the disclosures included five foreign generals, an admiral, a senior intelligence official, a foreign police inspector, and other military service members from a total of 13 countries, several of which endured war or coups. Several officers committed crimes within a few years of their training. Others committed crimes more than a decade later.

A senior Congolese military officer who attended a year-long program at the U.S. Judge orders preservation of ‘torture report’ A federal judge has ordered the government to preserve a Senate report documenting alleged abuse and mistreatment of detainees in CIA custody, potentially opening another avenue for the eventual declassification and public release of the unabridged report. U.S. Log In. CIA’s new torture documents: Fresh details of the horrors of “enhanced interrogation techniques” 'The Assassination Complex': Jeremy Scahill and Glenn Greenwald Probe Secret U.S. Drone Wars. A suface-to-air missile is fired during a live military drill overseen by North Korean leader Kim Jong-Un at an undisclosed location, March 20, 2013. Former Guantánamo Chief Summoned by French Court Over Torture Allegations. A French judge has summoned the former chief of Guantánamo Bay, retired U.S.

General Geoffrey Miller, to appear in court on March 1 to face allegations of torture against detainees. Miller presided over the U.S. military prison in Cuba from 2002 to 2004, shortly after then-President George W. DN! Guests. REVEALED: The boom and bust of the CIA’s secret torture sites. Former CIA Detainees Are Suing The Psychologists Who Developed The Torture Program. APA FINAL Report 7. An (in)effective interrogation. In early July, the American Psychological Association (APA) released an independent report detailing collusion between the APA and the Bush Administration on abusive interrogation techniques. No, You Cannot Know This Man's Account of His Torture by the CIA. CIA torture appears to have broken spy agency rule on human experimentation. US torture doctors could face charges after report alleges post-9/11 ‘collusion’ Psychologists Shielded U.S. Torture Program. Dick Cheney should — and eventually will — be tried as a war criminal: former International Court judge.

America, nation of torturers: Stop saying “this isn’t who we are” — here’s the real truth. Torture in a Dick Cheney Minute. CIA Detainees - Silk. The Other Torture Report: The Secret CIA Document That Could Unravel The Case For Torture. Put the evil bastards on trial: The case for trying Bush, Cheney and more for war crimes. Getting Away with Torture. The CIA’s Road to Infamy. The CIA’s Road to Infamy.