Peter Singer on Bioethics. Catholic Beliefs and Teachings. Ethics: the Search of the Life Worth Living. Ethics is one of the major branches of philosophy and an ethical theory is part and parcel of all philosophies broadly conceived. 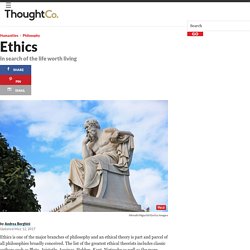 The list of the greatest ethical theorists includes classic authors such as Plato, Aristotle, Aquinas, Hobbes, Kant, Nietzsche as well as the more recent contributions of G.E. Moore, J.P. Sartre, B. Natural Law - OCR Religious Studies Philosophy and Ethics A level. Everything has a purpose Ethics is the struggle to determine what is right or wrong, or ‘good’ and ‘bad’. 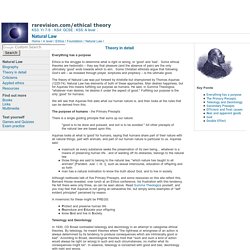 Some ethical theories are hedonistic – they say that pleasure (and the absence of pain) are the only ultimately ‘good’ ends towards which to aim. Natural Law. The term "natural law" is ambiguous. 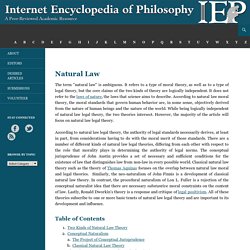 It refers to a type of moral theory, as well as to a type of legal theory, but the core claims of the two kinds of theory are logically independent. It does not refer to the laws of nature, the laws that science aims to describe. According to natural law moral theory, the moral standards that govern human behavior are, in some sense, objectively derived from the nature of human beings and the nature of the world. 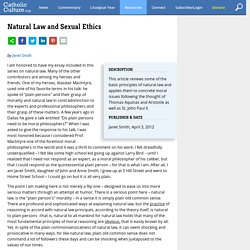 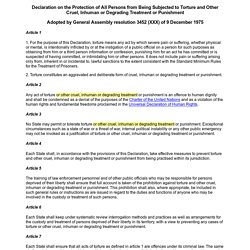 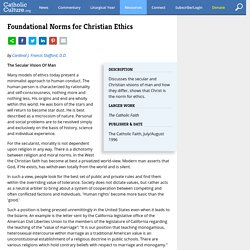 Francis Stafford, D.D. Description Discusses the secular and Christian visions of man and how they differ, shows that Christ is the norm for ethics. Larger Work The Catholic Faith. Moral relativism - Wikipedia. Moral relativism may be any of several philosophical positions concerned with the differences in moral judgments across different people and cultures. 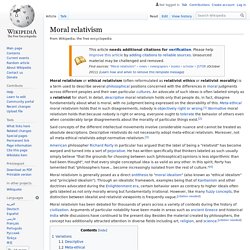 Council for Secular Humanism. RESource. Pastoral Constitution on the Church in the Modern Word-Gaudium et Spes. 1. 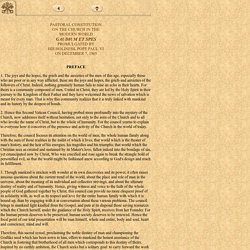 The joys and the hopes, the griefs and the anxieties of the men of this age, especially those who are poor or in any way afflicted, these are the joys and hopes, the griefs and anxieties of the followers of Christ. Indeed, nothing genuinely human fails to raise an echo in their hearts. For theirs is a community composed of men. United in Christ, they are led by the Holy Spirit in their journey to the Kingdom of their Father and they have welcomed the news of salvation which is meant for every man. That is why this community realizes that it is truly linked with mankind and its history by the deepest of bonds. 2. 3. Therefore, this sacred synod, proclaiming the noble destiny of man and championing the Godlike seed which has been sown in him, offers to mankind the honest assistance of the Church in fostering that brotherhood of all men which corresponds to this destiny of theirs. 4. 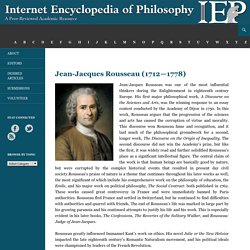 His first major philosophical work, A Discourse on the Sciences and Arts, was the winning response to an essay contest conducted by the Academy of Dijon in 1750. In this work, Rousseau argues that the progression of the sciences and arts has caused the corruption of virtue and morality. This discourse won Rousseau fame and recognition, and it laid much of the philosophical groundwork for a second, longer work, The Discourse on the Origin of Inequality. The second discourse did not win the Academy’s prize, but like the first, it was widely read and further solidified Rousseau’s place as a significant intellectual figure.

Rousseau greatly influenced Immanuel Kant’s work on ethics. Humanae Vitae - A Summary of the Encyclical. When the news emerged in 1968 that Pope Paul VI intended to issue an encyclical on the use of artificial birth control, many people thought that they saw the writing on the wall. 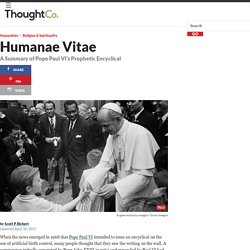 A commission initially appointed by Pope John XXIII in 1963 and expanded by Paul VI had suggested in a private report to Pope Paul VI in 1966 that artificial contraception might not be intrinsically evil. Copies of the report had been leaked to the press, and many commentators were certain that change was in the air. When Humanae Vitae was released, however, Pope Paul VI reaffirmed the traditional Catholic teaching on birth control and abortion. Today, as the destruction of the family that Paul VI predicted is well under way, the encyclical is regarded by many as prophetic. Quick Facts. The Natural Law Tradition in Ethics (Stanford Encyclopedia of Philosophy) 1. Key Features of Natural Law Theories Even though we have already confined ‘natural law theory’ to its use as a term that marks off a certain class of ethical theories, we still have a confusing variety of meanings to contend with. Some writers use the term with such a broad meaning that any moral theory that is a version of moral realism — that is, any moral theory that holds that some positive moral claims are literally true (for this conception of moral realism, see Sayre-McCord 1988)— counts as a natural law view.

Natural Law Theory legal definition of Natural Law Theory. The unwritten body of universal moral principles that underlie the ethical and legal norms by which human conduct is sometimes evaluated and governed. Natural law is often contrasted with positive law, which consists of the written rules and regulations enacted by government. The term natural law is derived from the Roman term jus naturale. The Universal Declaration of Human Rights. Who We Are at the Markkula Center for Applied Ethics. Utilitarianism. Utilitarianism is influential in political philosophy. Bentham and Mill believed that a utilitarian government was achievable through democracy. Mill thought that despotism was also justifiable through utilitarianism as a transitional phase towards more democratic forms of governance. As an advocate of liberalism, Mill stressed the relationship between utilitarianism and individualism.[10] Historical background[edit]

Ethical Relativism - Ethical Decision Making - Ethics Resources - Markkula Center for Applied Ethics - Santa Clara University. Utilitarianism : past, present and future. KWL Print – KWL Print & Digital Publications. The thirteenth book in the series Catholic Studies for Senior Secondary Students spans the last two years of secondary education or high school, pre-university levels in Australia and many other countries. Most of the content is also appropriate for adult education. Every chapter is cross-referenced with the Compendium of the Catechism of the Catholic Church, which is meant to be used with this text. Saint Charles Borromeo Catholic Church of Picayune, MS - Faith - Catechism of the Catholic Church.

Dignitatis humanae. 1. A sense of the dignity of the human person has been impressing itself more and more deeply on the consciousness of contemporary man,(1) and the demand is increasingly made that men should act on their own judgment, enjoying and making use of a responsible freedom, not driven by coercion but motivated by a sense of duty. The demand is likewise made that constitutional limits should be set to the powers of government, in order that there may be no encroachment on the rightful freedom of the person and of associations. This demand for freedom in human society chiefly regards the quest for the values proper to the human spirit. Jean-Jacques Rousseau on nature, wholeness and education. Martin Luther was wrong to reject Aristotle – he still has much to teach us today. Thomas Aquinas, part 8: Thomas for today. Karl Marx. Karl Marx was born in 1818 and died in 1883.

Marx was a German Jew. His father was a lawyer. Socrates. In his use of critical reasoning, by his unwavering commitment to truth, and through the vivid example of his own life, fifth-century Athenian Socrates set the standard for all subsequent Western philosophy. Since he left no literary legacy of his own, we are dependent upon contemporary writers like Aristophanes and Xenophon for our information about his life and work. As a pupil of Archelaus during his youth, Socrates showed a great deal of interest in the scientific theories of Anaxagoras, but he later abandoned inquiries into the physical world for a dedicated investigation of the development of moral character. Having served with some distinction as a soldier at Delium and Amphipolis during the Peloponnesian War, Socrates dabbled in the political turmoil that consumed Athens after the War, then retired from active life to work as a stonemason and to raise his children with his wife, Xanthippe.