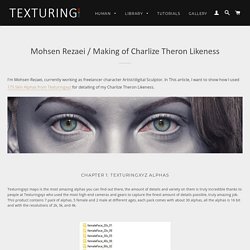 In This article, I want to show how I used 175 Skin Alphas from Texturingxyz for detailing of my Charlize Theron Likeness. Chapter 1: Texturingxyz Alphas Texturingxyz maps is the most amazing alphas you can find out there, the amount of details and variety on them is truly incredible thanks to people at Texturingxyz who used the most high-end cameras and gears to capture the finest amount of details possible, truly amazing job.This product contains 7 pack of alphas, 5 female and 2 male at different ages, each pack comes with about 30 alphas, all the alphas is 16 bit and with the resolutions of 2k, 3k, and 4k.

MD 101, seth nash. The Most Beautiful Women, Freckles and Fire Hair. Photoshop CS6 Text Glitching: Fixing The Text Corruption Problem. Recently I was able to upgrade to Photoshop CS6 and I loved the new look. 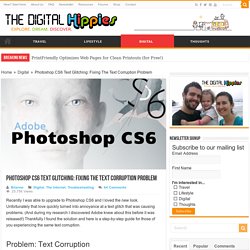 Unfortunately that love quickly turned into annoyance at a text glitch that was causing problems. 5 Free HDRIs - 16000x8000, up to 21 EVs. For the past few months I've been working on a dedicated website for all my HDR panoramas called HDRI Haven. 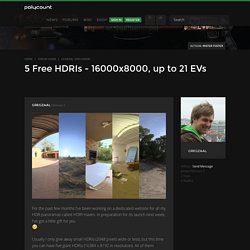 In preparation for its launch next week, I've got a little gift for you Usually I only give away small HDRIs (2048 pixels wide or less), but this time you can have five giant HDRIs (16384 x 8192 in resolution). All of them contain the highest dynamic range possible, meaning they'll give you perfectly realistic lighting right off the bat without requiring any complicated node setups. And some test renders done in Blender to show the lighting that they produce (the HDRIs are the only light source, the node setup is simple): 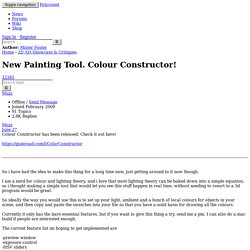 Check it out here! So i have had the idea to make this thing for a long time now, just getting around to it now though. I am a nerd for colour and lighting theory, and i love that most lighting theory can be baked down into a simple equation, so i thought making a simple tool that would let you see this stuff happen in real time, without needing to resort to a 3d program would be great. So ideally the way you would use this is to set up your light, ambient and a bunch of local colours for objects in your scene, and then copy and paste the swatches into your file so that you have a solid basis for drawing all the colours.

Currently it only has the bare essential features, but if you want to give this thing a try, send me a pm. The current feature list im hoping to get implemented are Anything else that would be helpful? Conor Walton. Free_portrait_lighting_poster.jpg (JPEG Image, 3000 × 4242 pixels) - Scaled (23%) Game Ui, Mobile Game and Game Gui. Weapons, Game Design and Behance. EVERSPACE by ROCKFISH Games. In EVERSPACE™ we take a more action-focused approach to the core gameplay of a space shooter and combine it with a modern, rogue-like game loop taking you on a challenging journey through an ever-changing, yet beautifully crafted universe full of surprises. 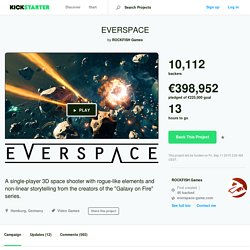 Each run will be exciting as you will have to face completely new situations. Your skills, experience and talent for improvisation will be tested continously. By this we keep each part of the game long-lasting and generate lots of individual, meaningful moments for you to experience. The goal of the game may sound simple: Reach your destination. Male Anatomy Ref. Hey everyone, I've been tinkering on and off for the last little while on this male sculpt. 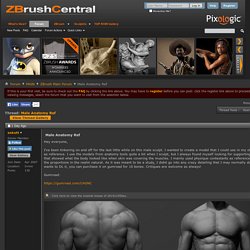 I wanted to create a model that I could use in my other works as reference. I use the models from anatomy tools quite a bit when I sculpt, but I always found myself looking for supporting reference that showed what the body looked like when skin was covering the muscles. Muscle, Studio Ghibli and Sculpture. Hand Poses by Melyssah6-Stock on DeviantArt. Cave entrance and stones by Ainama.deviantart.com on @deviantART. 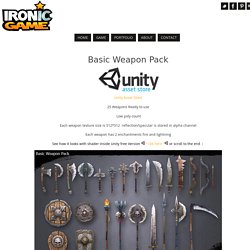 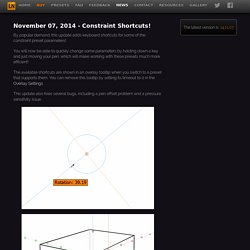 You will now be able to quickly change some parameters by holding down a key and just moving your pen, which will make working with these presets much more efficient! The available shortcuts are shown in an overlay tooltip when you switch to a preset that supports them. You can remove this tooltip by setting its timeout to 0 in the Overlay Settings. This update also fixes several bugs, including a pen offset problem and a pressure sensitivity issue. This update fixes a bug that would cause the overlay window and distortion center to start on the wrong monitor for some multi-monitor configurations. Remember that you can always set/reset the distortion center via shortcuts that you can configure in the settings. October 14 Edit: A user reported the overlay window was sometimes resizing while drawing.

Keep in mind that this is still somewhat experimental, so please report any strange behavior. Ruins of Osgiliath. How to Make Wargaming Terrain - Rocky Hills — TableTop Terraformers - 3T-Studios. Welcome to our first step-by-step article that will guide you through making an actual, fully finished piece of terrain in the 3T-Studios style! 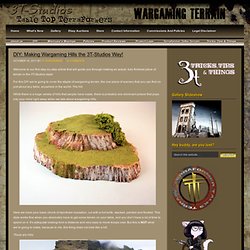 For this DIY we’re going to cover the staple of wargaming terrain, the one piece of scenery that you can find on just about any table, anywhere in the world- The hill. While there is a huge variety of hills that people have made, there is probably one dominant picture that pops into your mind right away when we talk about wargaming hills: Blacksmith's Forge. 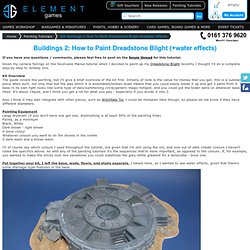 Given my camera failings on the Skullvane Manse tutorial when I decided to paint up my Dreadstone Blight recently I thought I'd do a complete step-by step to remedy this. Kit Overview The guide covers the painting, but I'll give a brief overview of the kit first. Initially of note is the value for money that you get, this is a substantial piece when built, not only that but the way which it is assembled/broken down means that you could easily break it up and get 2 parts from it. The base in its own right looks like some type of dais/summoning circle/generic magic hotspot, and you could put the tower walls on whatever base you liked. [Updated] 6/17 PBE Update #2: Summoner's Rift Update. [ Update: Videos of the new jungle camp animations added! ] A second patch has been pushed to the PBE and the Summoner's Rift Update is available for testing!! Everything has been updated, from the terrain and shopkeepers to the epic monsters and jungle camps!

The Cinematography of "The Incredibles" Part 2. See Part 1 here.Continuing with my case study of the shot compositions from Pixar's film "The Incredibles". All images used here are ©Disney/Pixar (unless otherwise stated). Composition in film includes many different aspects; color, shape, line, contrast, positioning, cropping, viewpoint, rhythm, perspective, proportion, geometry, and many more. The dinner table sequence is a nice one that showcases how well you can move the camera around depending on which character(s) you want to make as the focus of the shot. With 5 characters all facing inwards, turning their heads left an right according to which other person they are talking to, you create scenario that can have a million different ways you can shoot this scene from. Quick and easy grass texture. Amalj'aa I - Final Fantasy XIV : A Realm Reborn (FFXIV ARR) Model Viewer. Creating Custom Brushes With ctrlpaint.com. Ever wanted to know how to create your own custom brushes?

Ctrl+Paint has a new video that will teach you the ins and outs of creating custom brushes in Photoshop. If you’ve never heard of ctrl+Paint, then you’re missing out on some great tutorials and a wealth of handy knowledge when it comes to digital painting and art fundamentals and much more! The site is updated very regularly as there are two new videos posted every week and each one better than the last. So I would highly recommend visiting ctrl+Paint to anyone interested in the digital painting medium.

Dota2CharacterArtGuide.pdf. Free game graphics. Aris Kolokontes art. #ConceptCraniopagus Blog on deviantART. Velo Towers Design Project (+ VIDEO) An unusual Velo Towers design project by Asymptote Architecture promises to become a significant architectural landmark of Yongsan Park, South Korea. The structure is composed of dynamic arrangement of stacked and rotated volumes from formal to conventional extrusion of mass. Velo Towers feature unconventional design due to skilful fusion of the typical tower architecture into horizontal and vertical configuration. The towers are located in such a way, that each residential volume takes advantage of its position.

The game was originally revealed in the September 2007 issue of Game Informer magazine. Labs - Multicolr Search Lab. The latest news on Pacific Rim. Stone textures. Nate's Photos : Photo Keywords : texture. Crescent Bridge Canyon. Crescent Bridge Canyon was my final hike for our Spring 2012 trip, and it proved to be one of the best hikes and trip highlights.

There is nothing better than ending a DV trip with an outstanding hike and then getting to think about that hike during our 10 hour drive home back to the Bay Area. Crescent Bridge was discovered and named by a well-known regular Death Valley hiker named Robbie in the Spring of 2011. Robbie is also known for being the only person to ever document a hike through Cameo Canyon. Crack textures. Design Competition. Red Dot has announced the winners of the 2010 design competition and here we are featuring the best 15 product designs among 43 winners which have been picked considering the functionalities and overall usability. Articulation Home Page. Day 9b - Bull Pasture and Estes Canyon Loop. The next hike was a short drive from the Arch Canyon trailhead. Crystal Cave of Giants - Naica, Mexico. Video Humour Jeu Flash Buzz et Site Drole et Insolite.