PARLEMENT EUROPEEN - Réponse à question E-002169/2012 Latin fish names. According to the Danish newspaper Berlingske (18 February 2012), in the very near future the Commission will submit a proposal for a directive which would require Danish fishmongers to begin displaying the Latin names for their fish and to tell consumers what a catch is called in Latin. 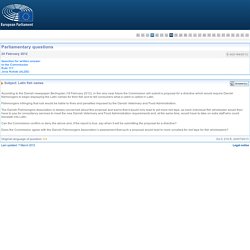 Fishmongers infringing that rule would be liable to fines and penalties imposed by the Danish Veterinary and Food Administration. The Danish Fishmongers Association is deeply concerned about this proposal and warns that it would only lead to yet more red tape, as each individual fish wholesaler would then have to pay for consultancy services to meet the new Danish Veterinary and Food Administration requirements and, at the same time, would have to take on extra staff who could translate into Latin.

Can the Commission confirm or deny the above and, if the report is true, say when it will be submitting the proposal for a directive? PARLEMENT EUROPEEN - Réponse à question E-008404-16 Fraudulent labelling of fish in the EU. In answer to my Question E-000149/2016 on fraud in the labelling of fish, the Commission said that a ‘project for sampling in view of DNA identification of fish species is planned for 2016’. 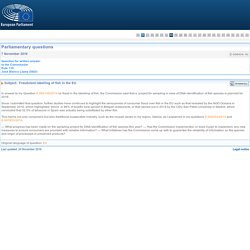 Since I submitted that question, further studies have continued to highlight the seriousness of consumer fraud over fish in the EU such as that revealed by the NGO Oceana in September 2016, which highlighted ‘errors’ in 98% of bluefin tuna served in Belgian restaurants, or that carried out in 2014 by the CEU San Pablo University in Madrid, which concluded that 32.5% of albacore in Spain was actually being substituted by other fish. PUBLIC PRIVATE PARTNERSHIP IN AQUACULTURE - APRIL 2016 - ROLE OF PUBLIC PRIVATE PARTNERSHIP IN FISH FOOD SAFETY ASSURANCE AND QUALITY MANAGEMENT IN FISH TRADE. 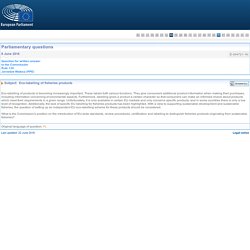 These labels fulfil various functions. They give consumers additional product information when making their purchases, including information concerning environmental aspects. Furthermore, labelling gives a product a certain character so that consumers can make an informed choice about products which meet their requirements in a given range. Unfortunately, it is only available in certain EU markets and only concerns specific products, and in some countries there is only a low level of recognition. Additionally, the lack of specific EU labelling for fisheries products has been highlighted. What is the Commission's position on the introduction of EU-wide standards, review procedures, certification and labelling to distinguish fisheries products originating from sustainable fisheries? PARLEMENT EUROPEEN - Réponse à question E-002791-15 Use of scientific names in labelling of fishery and aquaculture products for sale to final consumers and mass caterers. 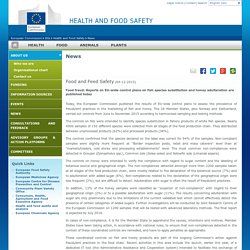 The 28 Member States, plus Norway and Switzerland, carried out controls from June to November 2015 according to harmonised sampling and testing methods. SKYNEWS_COM_AU 12/08/15 No fish-labelling for restaurants. Australians still won't know where seafood sold at restaurants and fish-and-chip shops comes from after the Senate killed off suggested labelling changes. 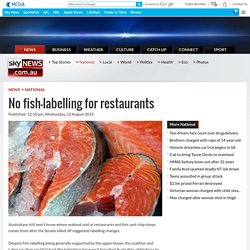 Despite fish-labelling being generally supported by the upper house, the coalition and Labor say they couldn't back the legislation because it breached Australia's obligations to co-regulators New Zealand. The private member's bill would have forced the food regulatory body to come up with origin standards for cooked and pre-prepared seafood within 12 months. As an example, the standards would require a pub selling fish to list on the menu from where it comes. Seafood sold elsewhere, such as fish markets or supermarkets, is already required to have the source country identified to consumers. ABC_NET_AU 15/05/15 Restaurant seafood country of origin labelling laws 'would not work in Australia', Scullion says. 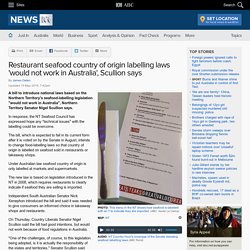 In response, the NT Seafood Council has expressed hope any "technical issues" with the labelling could be overcome. The bill, which is expected to fail in its current form after it is voted on by the Senate in August, intends to change food-labelling laws so that country of origin is labelled on seafood sold in restaurants or takeaway shops. Under Australian law seafood country of origin is only labelled at markets and supermarkets.

The new law is based on legislation introduced in the NT in 2008, which requires restaurants to clearly indicate if seafood they are selling is imported. Independent South Australian Senator Nick Xenephon introduced the bill and said it was needed to give consumers an informed choice in takeaway shops and restaurants. "They are poodles missing a vital part of their male anatomy. " FOOD SAFETY MAGAZINE 04/03/14 Electronic Seafood Traceability in a World of Risk and Uncertainty: The Gulf Seafood Trace Experience. FSM eDigest | March 4, 2014 By Alexander Miller Seafood is the most traded food in the world,[1] and such distinction brings both challenge and opportunity, as recently witnessed in the U.S. 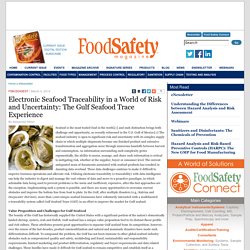 Gulf of Mexico.[2] The seafood industry is open to significant risk and uncertainty with its complex supply chain in which multiple shipments become one finished product and extensive transformation and aggregation occur through numerous handoffs between harvest and consumption. As information surrounding such complexity grows exponentially, the ability to access, manage, and share such information is critical to mitigating risk, whether at the supplier, buyer or consumer level. 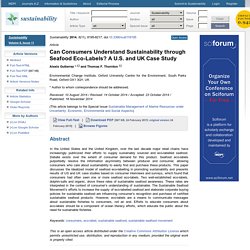 Received: 10 August 2014 / Revised: 14 October 2014 / Accepted: 23 October 2014 / Published: 18 November 2014 In the United States and the United Kingdom, over the last decade major retail chains have increasingly publicized their efforts to supply sustainably sourced and eco-labelled seafood. Debate exists over the extent of consumer demand for this product. Seafood eco-labels purportedly resolve the information asymmetry between producer and consumer, allowing consumers who care about sustainability to easily find and purchase these products. This is an open access article distributed under the Creative Commons Attribution License which permits unrestricted use, distribution, and reproduction in any medium, provided the original work is properly cited. MDPI and ACS Style Gutierrez, A.; Thornton, T.F.

ICTSD 14/10/15 Seafood traceability and labelling: Lessons from WTO Tuna disputes. How to track fish from sea to fork to ensure positive environmental outcomes? 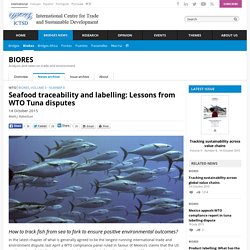 In the latest chapter of what is generally agreed to be the longest running international trade and environment dispute, last April a WTO compliance panel ruled in favour of Mexico’s claims that the US continues to unfairly discriminate against tuna products from its southern neighbour, particularly around the application of certification, tracking, and verification processes linked to a “dolphin-safe” label. The April verdict by the global trade arbiter came in response to claims brought by Mexico under Article 21.5 of the Dispute Settlement Understanding (DSU) alleging that the US failed to comply with 2012 recommendations from the WTO’s highest court on the matter.

Both the US and Mexico have appealed the compliance panel ruling and a hearing was held before the Appellate Body on those appeals on 21-22 September. Compliance proceedings, a new chapter. FOOD MAGAZINE 24/11/14 OceanWatch Australia increases traceability with QR codes. Marking an Australian fishing industry first, OceanWatch Australia has introduced unique QR codes for fresh seafood, providing wholesale buyers with a complete picture of where, how, and by who the catch was caught. 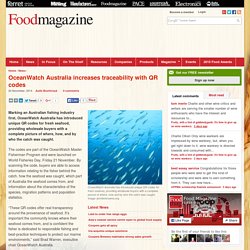 The codes are part of the OceanWatch Master Fisherman Program and were launched on World Fisheries Day, Friday 21 November. By scanning the code, buyers are able to access information relating to the fisher behind the catch, how the seafood was caught, which part of Australia the seafood comes from, and information about the characteristics of the species, migration patterns and population statistics. “These QR codes offer real transparency around the provenance of seafood. It’s important the community knows where their seafood comes from, and is confident the fisher is dedicated to responsible fishing and best-practice techniques to protect our marine environments,” said Brad Warren, executive chair OceanWatch Australia. Food Control. 09/2015 Authentication and traceability of fish maw products from the market using DNA sequencing. Food Policy. 10/2013 Consumer knowledge and use of information about fish and aquaculture.

A recent investigation published in Italy shows that around two-thirds of the fish that are normally consumed in Italian restaurants are not in reality what they are sold as. An uninformed consumer can in fact be led to believe that they are eating a product from the Tyrrhenian Sea, which in reality comes from Vietnam. It is a common occurrence, for example, for Mekong catfish (pangasius) to be sold as grouper, or for Atlantic halibut to be passed off as sole. There are numerous examples and reasons for this: over the last year fish imports to Italy rose by 11 %, and this is not due to a lack of fish in our seas, which in reality are thriving.

It simply comes down to the fact that fish from other seas cost a lot less. However, these fish have different features from ours, and the two should absolutely not be mixed up. Is the Commission aware of this situation which is very damaging, especially for our fishermen, and highly misleading for consumers? DEFRA - 2012 - Guidance Notes on Fish Labelling legislation -The Fish Labelling Regulations 2012 - Regulations (EC) 104/2000, 20.

Fifth SEAFOODplus Conference - Copenhagen 08-06-08 to 10-06-08 - Session 6 Seafood traceability. Food Standards Agency - Fish Labelling (England) Regulations 2010. FSA 06/04/10 New fish labelling rules. MITIP 2011, Norwegian University of Science and Technology, Trondheim, Norway - EPCIS standard used for improved traceability in. BRITISH COLUMBIA - MARCH 2010 - The Requirements, Current Conditions and Readiness for Traceability in the Canadian Aquaculture. In 2005 the original report "Assessing the State of Readiness" was completed. (View original report) The relevant guidelines, standards, and regulations have been re-examined and any changes brought into place since 2005 have been summarized in the updated 2010 report.

OCEANA - AOUT 2012 - Do You Know Where Your Seafood Comes From? - How Seafood Traceability Stacks Up Against Beef and Produce.