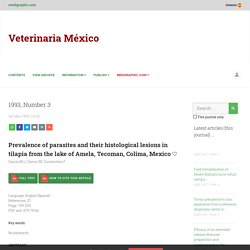 Parasitological and histopathological studies were carried out in two species of tilapia: Oreochromis aureus and Oreochromis mossambicus from the lake of Amela in Colima, Mexico. Gross examination of these freshwater fish was carried out under a stereoscopic microscope in order to collect and identify parasites. A taxonomic study of the parasites was done. PATHOGENS 06/05/21 Research Advances on Tilapia Streptococcosis. Streptococcus agalactiae, often referred to as group B streptococci (GBS), is a severe pathogen that can infect humans as well as other animals, including tilapia, which is extremely popular in commercial aquaculture. 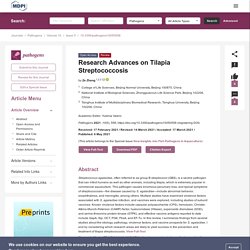 FISHSITE 26/02/21 The oral vaccine that aims to tackle Streptococcus in tilapia. Developed by Feedvax*, an Argentinian startup, the vaccine is the brainchild of Luis Barletta – a vet, cattle farmer and entrepreneur. 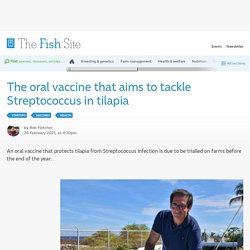 “For cattle farmers the pain point is that vaccines need to be administered twice – one to prime them, one as a boost. For tilapia the vaccination process is even worse – the fish have to be removed from the water, and for species like tilapia, the vaccine is injected manually, one by one,” he explains. Barletta became aware of the issue when he found out the laborious process required to vaccinate tilapia.

And in 2017, despite a lack of experience in vaccine formulation, armed with a “a combination of ignorance, courage and confidence” he decided to assemble a team to develop an oral alternative to the existing commercial vaccines against Streptococcus – one of the most costly diseases to impact the tilapia sector globally. “There are two presentations of the disease, the acute and subacute forms. Stress reduction Early promise. SCIENTIFIC REPORTS 12/11/20 Microalgae-blend tilapia feed eliminates fishmeal and fish oil, improves growth, and is cost viable.

The experimental design and fish use protocol were approved by the Institutional Animal Care and Use Committee (IACUC) of Dartmouth College. 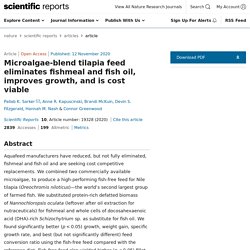 WATER 24/10/20 The Duckweed, Lemna minor Modulates Heavy Metal-Induced Oxidative Stress in the Nile Tilapia, Oreochromis niloticus. A two-fold integrated research study was conducted; firstly, to understand the effects of copper (Cu) and zinc (Zn) on the growth and oxidative stress in Nile tilapia, Oreochromis niloticus; secondly, to study the beneficial effects of the duckweed Lemna minor L. as a heavy metal remover in wastewater. 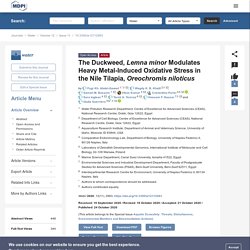 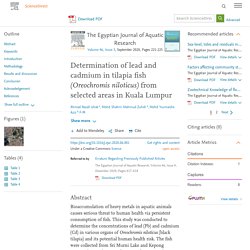 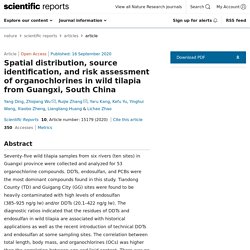 These OCs are not discussed later. MONTABAY 15/10/20 Tilapia: How an invasive fish came to dominate our ecology, food and psyche. Tilapia are among several fish species belonging to the family Cichlidae, native to Africa and the Middle East. 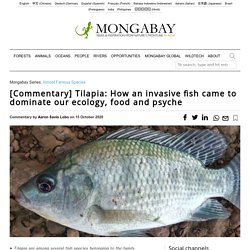 Their ability to adapt to a wide variety of conditions, their omnivorous food habits and their popularity in the aquaculture sector have resulted in tilapias being introduced to several parts of the world.The Mozambique and the Nile tilapia were introduced into India to boost food security. However, through both accident and intentional release, the species have established themselves through large sections of the country’s waterways, making their way into biodiversity hotspots as well.Creating a market for an invasive species like the tilapia, if not done with a clear understanding about their threat to local ecosystems and reasons for their eradication, can have serious consequences for natural ecosystems and ecosystem services.On the eve of the World Food Day (October 16), Aaron Savio Lobo examines the complex issues around tilapia in this commentary. 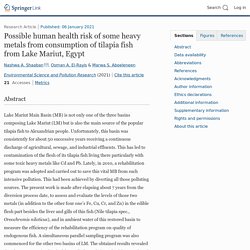 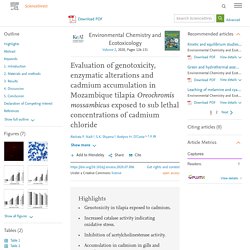 1. Introduction Aquaculture is the fastest growing food production sector in the world with great potential to meet the growing needs for animal protein (Soliman and Yacout, 2016). Egypt is the top aquaculture producer in Africa accounting for two-thirds of the continent's production and the third largest tilapia producer globally after China and Indonesia. Since 2000, there has been a tremendous increase in fish production, which is mainly attributed to the shift from extensive and semi-intensive towards intensive aquaculture systems (FAO, 2010). Therefore, Egyptian aquaculture sector plays a central role in the country's economy, producing over 1.8 million tons of fish including tilapia, mullet and carp in 2017.

Economic growth in Sub-Saharan Africa is on the rise, from 4.7 percent in 2013 to a forecasted 5.2 percent in 2015. This performance is boosted by rising investment in natural resources and infrastructure; and strong household spending according to the World Bank. The population of Sub-Saharan Africa was some 900 million inhabitants in 2014 and with the current growth rate, the United Nations predicts a population of nearly 2.1 billion by year 2050 for this region.

BULLETIN OF ANIMAL HUSBANDRY (BR) - 2020 - Use of natural antioxidants in sous vide tilapia fillet. AGÊNCIA DE VIGILÂNCIA SANITÁRIA - ANVISA. VICE 16/04/18 No, Tilapia Is Not a Mutant, Boneless, Toxic Fish, Despite What the Internet Says - Please stop falling for that crazy graphic of tilapia “facts” that is making its way around the internet.

Earlier this week, the trailer for The Meg—an upcoming summer movie starring Jason Statham, Jason Statham’s clenched jaw, and a creature described as “the largest shark that ever existed”—made its way around the internet. Even though the titular Meg (short for Megalodon) is supposedly 60 feet long and has a bite stronger than the average T. Rex, it still seems less terrifying than that graphic of tilapia “facts” that is also making its way around the internet. If your list of Facebook friends includes anyone over the age of 55, you know the picture that we’re talking about: It’s the one with a stock photo of a tilapia underneath two vats of what might be Spaghetti-Os, and some 100 PERCENT WELL RESEARCHED AND SCIENTIFICALLY ACCURATE STATEMENTS about the fish, such as “This fish is boneless, has no skin and can’t be overcooked,” “You can’t find tilapia in the wild” and “Dioxin is found in this fish.