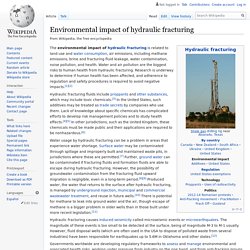 Water and air pollution are the biggest risks to human health from hydraulic fracturing. Research is underway to determine if human health has been affected, and adherence to regulation and safety procedures is required to avoid negative impacts.[1][2] Hydraulic fracturing fluids include proppants and other substances, which may include toxic chemicals.[3] In the United States, such additives may be treated as trade secrets by companies who use them. Lack of knowledge about specific chemicals has complicated efforts to develop risk management policies and to study health effects.[4][5] In other jurisdictions, such as the United Kingdom, these chemicals must be made public and their applications are required to be nonhazardous.[6] Air emissions[edit] Flowback[edit] 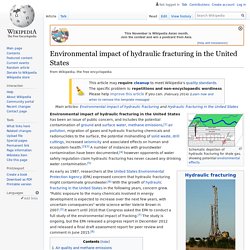 Air quality and methane emissions[edit] Water issues[edit] 2015 EPA Report on Spills[edit] THE LANCET - NOV 2018 - Space technologies for monitoring health and environmental impact of hydraulic fracturing. The Extractive Industries and Society Volume 5, Issue 4, November 2018, Fuel to the fire: Risk governance and framing of shale gas in the Netherlands. Studies on Russian Economic Development September 2019, Volume 30, Issue 5, Prospects and Challenges of Shale Gas Recovery in Europe. LIVING ON EARTH 19/07/19 Fracking and Your Health. Air Date: Week of July 19, 2019 stream/download this segment as an MP3 file Fracking pads and roads, seen here from the air, can turn a rural landscape into a network of industrial infrastructure. 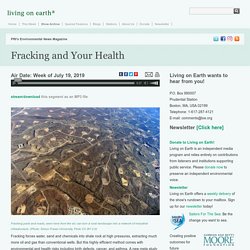 (Photo: Simon Fraser University, Flickr CC BY 2.0) Fracking forces water, sand and chemicals into shale rock at high pressures, extracting much more oil and gas than conventional wells. But this highly efficient method comes with environmental and health risks including birth defects, cancer, and asthma. A new meta study brings together the findings of more than 1700 studies, articles and reports on the health impacts of fracking. Transcript BASCOMB: From PRI and the Jennifer and Ted Stanley Studios at the University of Massachusetts Boston, this is Living on Earth. Fracking has revolutionized the extraction of oil and gas in just a few years. BASCOMB: So what was your basic finding in this most recent report? STEINGRABER: Well, we looked across a wide range of parameters. JOURNAL OF THE ASSOCIATIO OF ENVIRONMENTAL AND RESOURCE ECONOMISTS - DEC 2016 - Unconventional Shale Gas Development, Risk Perceptions, and Averting Behavior: Evidence from Bottled Water Purchases. 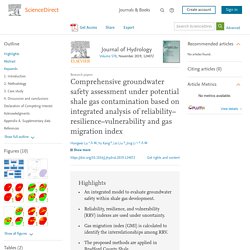 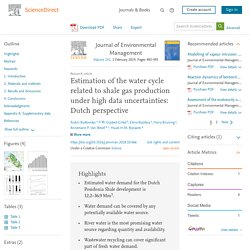 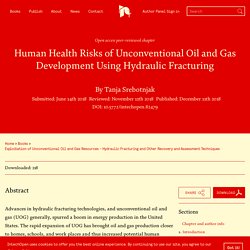 Introduction Advances in technologies that allow directional drilling coupled with high-volume hydraulic fracturing have made large unconventional oil and gas deposits accessible in the United States. The Energy Information Agency (EIA) estimates that in 2017 approximately 60% of U.S. dry natural gas production came from shale resources [1]. Int J Environ Res Public Health. 2018 May; 15(5): 885. Frequency Analysis of Failure Scenarios from Shale Gas Development. Greenpeace_org_uk - 2019 - Fracking. Fracking – or, to give its technical term, hydraulic fracturing – is a process to get at oil and gas contained within shale rocks. 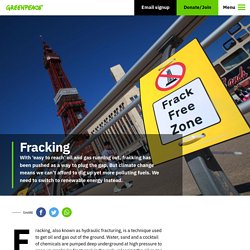 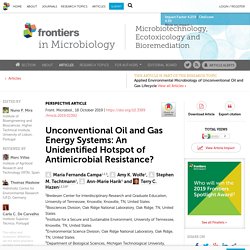 Antimicrobial agents, specifically biocides, are used in UOG extraction to mitigate microbially induced corrosion and gas souring. Conventional oil and gas practices extract hydrocarbon from high-permeability, highly pressurized strata such as limestone. In contrast, unconventional oil and gas (UOG) practices extract hydrocarbon from low permeability strata such as shale using hydraulic fracturing (HF) coupled with horizontal drilling. HF uses injection fluid containing water, sand, and chemicals. UOG biocides are used alone and in combination. Table 1. Currently, we do not know the resistance mechanism for many commonly used UOG biocides, information essential to assess if resistance emergence and selection (1) is biocide-specific or (2) could co-select for a broad spectrum of antimicrobials and antibiotics. Figure 1. Conclusion. FRONT. ENERGY RES. 05/03/19 South Africa After Paris—Fracking Its Way to the NDCs? 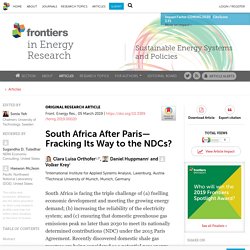 Introduction South Africa's (SA) economy is characterized as one of the most carbon-intensive in the world (Winkler, 2007; Alton et al., 2014). National CO2 emissions per capita are approximately twice as high as the global average, and CO2 emissions per unit of GDP are close to three times as high (Table 1). FRONT. COMMUN. 27/03/19 Debating Hydrofracking: The Discursive Construction of Risk.

Introduction Hydrofracking is a new technology that allows for access to previously untapped sources of natural gas or oil. 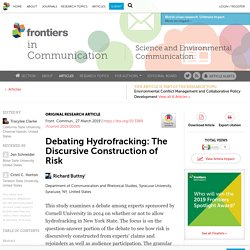 Hydrofracking, a shorthand for “high-volume, horizontal hydraulic fracturing,” or simply “fracking,” involves injecting millions of gallons of water, chemicals, and sand into a wellhead at high pressure to fracture shale or a coal-seam formation to release gas or oil (Duggan-Hass et al., 2013). This emerging technology became able to drill more than a mile along with horizontal extensions to frack open the gas trapped in shale or coal seams.

Hydrofracking has been seen in remarkably disparate ways, on the one hand, as a “game changer” for US energy production, job creation, and reduced fossil fuel emissions compared to coal, but on the other hand, as an environmental or public health hazard due to drinking water contamination, air pollution, methane emissions affecting climate change, or seismic activity. ENVIRONMENTAL SCIENCE - 2019 - Identifying groundwater compartmentalisation for hydraulic fracturing risk assessments. If you are not the author of this article and you wish to reproduce material from it in a third party non-RSC publication you must formally request permission using Copyright Clearance Center. Go to our Instructions for using Copyright Clearance Center page for details. Authors contributing to RSC publications (journal articles, books or book chapters) do not need to formally request permission to reproduce material contained in this article provided that the correct acknowledgement is given with the reproduced material.

Reproduced material should be attributed as follows: For reproduction of material from NJC: Reproduced from Ref. XX with permission from the Centre National de la Recherche Scientifique (CNRS) and The Royal Society of Chemistry. If the material has been adapted instead of reproduced from the original RSC publication "Reproduced from" can be substituted with "Adapted from". In all cases the Ref. Environment International Volume 125, April 2019, A critical review of risks, characteristics, and treatment strategies for potentially toxic elements in wastewater from shale gas extraction. Abass et al., 2017 O.K. Abass, M. Zhuo, K. ENERGY TECHNOLOGY 26/11/18 Comprehensive Environmental Impacts and Optimization of Onshore Shale Gas Development and Delivery. The environmental impact of shale gas hydraulic fracturing is not completely understood. Therefore, the objective of this paper is to estimate the lifecycle environmental impact of shale gas production per mega joule (MJ) of energy extracted and delivered.

The analysis is based on using CML 2001‐Apr 2015 methods in GaBi software on a case study of a shale gas well. The global warming potential (GWP100) ranges from 54 to 99 g CO2e /MJ with a central estimate of 72 g CO2e /MJ. The GWP 100, including land use change, is 230 g CO2e /MJ. The best‐case scenario, with no venting of the gas, has the minimum GWP 100 impact. EMERALD INSIGHT 29/07/19 Research on comprehensive environmental impact assessment of shale gas development. DOVEPRESS 20/08/15 Methane emissions and climatic warming risk from hydraulic fracturing and shale gas development: implications for policy. Robert W Howarth Department of Ecology and Environmental Biology, Cornell University, Ithaca, NY, USA Abstract: Over the past decade, shale gas production has increased from negligible to providing >40% of national gas and 14% of all fossil fuel energy in the USA in 2013.

This shale gas is often promoted as a bridge fuel that allows society to continue to use fossil fuels while reducing carbon emissions since less carbon dioxide is emitted from natural gas (including shale gas) than from coal and oil per unit of heat energy. Indeed, carbon dioxide emissions from fossil fuel use in the USA declined to some extent between 2009 and 2013, mostly due to economic recession but in part due to replacement of coal by natural gas. However, significant quantities of methane are emitted into the atmosphere from shale gas development: an estimated 12% of total production considered over the full life cycle from well to delivery to consumers, based on recent satellite data.

DURHAM, NC – A new study by scientists at Duke University and the U.S. SCIENTIFIC AMERICAN - OCT 2010 - Is Fracking behind Contamination in Wyoming Groundwater? Questions about whether hydraulic fracturing is to blame remain as the EPA prepares for peer review. Getty Images Natural gas extraction via hydraulic fracturing has been linked to contamination in groundwater. The US Environmental Protection Agency (EPA) sparked a firestorm in December last year when it released a draft report1 suggesting that the use of hydraulic fracturing — or 'fracking' — to extract natural gas had contaminated groundwater near Pavillion, Wyoming.