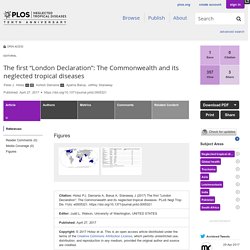 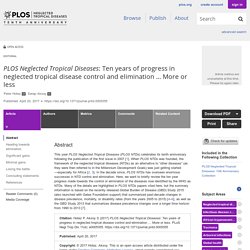 When PLOS NTDs was founded, the framework of the neglected tropical diseases (NTDs) as an alternative to “other diseases” (as they were then referred to in the Millennium Development Goals) was just getting started—especially for Africa [2, 3]. In the decade since, PLOS NTDs has overseen enormous successes in NTD control and elimination. Here, we want to briefly review the ten year progress made towards the control or elimination of the diseases now identified by the WHO as NTDs. PLOS 30/06/16 Southern Europe’s Coming Plagues: Vector-Borne Neglected Tropical Diseases. PLOS 05/06/14 Neglected Zoonotic Diseases—The Long and Winding Road to Advocacy.

Abstract Background Years of advocacy for the neglected tropical diseases (NTDs) have focused the world's attention on these diseases of the poor, resulting most recently in the 2012 “London Declaration” and the recent World Health Assembly Resolution WHA66.12 on NTDs in May 2013. 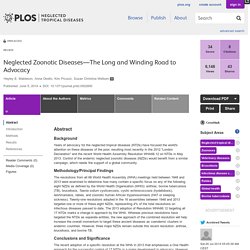 Control of the endemic neglected zoonotic diseases (NZDs) would benefit from a similar campaign, which needs the support of a global community. PLOS 29/05/14 Ten Global “Hotspots” for the Neglected Tropical Diseases. PLOS 05/12/13 Elimination and Eradication of Neglected Tropical Diseases with Mass Drug Administrations: A Survey of Experts. Abstract Background Lymphatic filariasis, onchocerciasis, schistosomiasis, soil-transmitted helminths, and trachoma are the five most prevalent neglected tropical diseases in the world, and each is frequently treated with mass drug administrations. 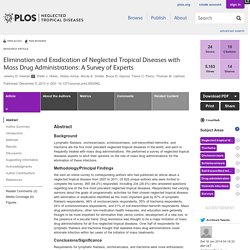 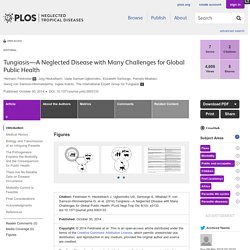 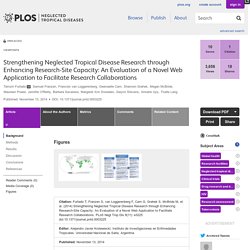 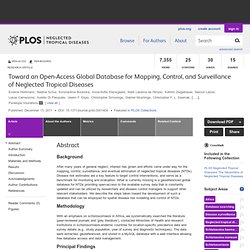 Disease risk estimates are a key feature to target control interventions, and serve as a benchmark for monitoring and evaluation. What is currently missing is a georeferenced global database for NTDs providing open-access to the available survey data that is constantly updated and can be utilized by researchers and disease control managers to support other relevant stakeholders. We describe the steps taken toward the development of such a database that can be employed for spatial disease risk modeling and control of NTDs. PLOS 25/10/11 The Neglected Tropical Diseases of India and South Asia: Review of Their Prevalence, Distribution, and Control or. PLOS 27/07/11 A Review of Exotic Animal Disease in Great Britain and in Scotland Specifically between 1938 and 2007. Results Of the former OIE List A diseases, CSF, FMD, SVD, HPAI (“fowl plague” until 1981 [8]) and NDV (“fowl pest” until 1962) have all occurred in GB between 1938 and 2007. 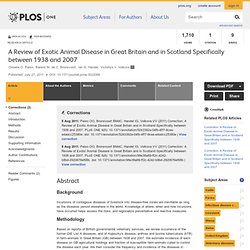 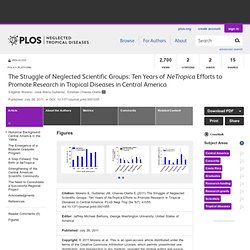 Historical Background: Central America in the 1980s A different historic, economic, and political cycle started in 1979. The Emergence of a Bilateral Graduate Program Figure 1. Figure 2. PLOS 31/05/11 Research and Capacity Building for Control of Neglected Tropical Diseases: The Need for a Different Approach. Abstract Background Crimean-Congo hemorrhagic fever (CCHF) activity has recently been detected in the Kordufan region of Sudan. PLoS Negl Trop Dis. 2012 February; 6(2): e1475. Neglected Tropical Diseases of the Middle East and North Africa: Review of Their. PLOS 16/04/15 Neglected Tropical Diseases among the Association of Southeast Asian Nations (ASEAN): Overview and Update. Abstract The ten member states of the Association of Southeast Asian Nations (ASEAN) constitute an economic powerhouse, yet these countries also harbor a mostly hidden burden of poverty and neglected tropical diseases (NTDs). 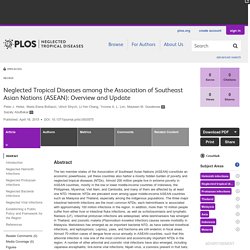 Almost 200 million people live in extreme poverty in ASEAN countries, mostly in the low or lower middle-income countries of Indonesia, the Philippines, Myanmar, Viet Nam, and Cambodia, and many of them are affected by at least one NTD. However, NTDs are prevalent even among upper middle-income ASEAN countries such as Malaysia and Thailand, especially among the indigenous populations. The three major intestinal helminth infections are the most common NTDs; each helminthiasis is associated with approximately 100 million infections in the region. In addition, more than 10 million people suffer from either liver or intestinal fluke infections, as well as schistosomiasis and lymphatic filariasis (LF). Editor: Darren J. PLOS 26/02/15 The Gulf of Mexico: A “Hot Zone” for Neglected Tropical Diseases? Citation: Hotez PJ, Bottazzi ME, Dumonteil E, Buekens P (2015) The Gulf of Mexico: A “Hot Zone” for Neglected Tropical Diseases? PLoS Negl Trop Dis 9(2): e0003481. doi:10.1371/journal.pntd.0003481 Editor: Sima Rafati, Pasteur Institute of Iran, ISLAMIC REPUBLIC OF IRAN Published: February 26, 2015 Copyright: © 2015 Hotez et al.

This is an open access article distributed under the terms of the Creative Commons Attribution License, which permits unrestricted use, distribution, and reproduction in any medium, provided the original author and source are credited Funding: PB is supported by grant number R01AI083563 from the National Institute of Allergy and Infectious Diseases. Competing interests: The authors have declared that no competing interests exist. Subtropical portions of North America that envelop the Gulf of Mexico are emerging as areas that are highly endemic for neglected tropical diseases (NTDs).