Back to Africa? For some African-Americans, the answer is yes. Jimmy Thorne says that relocating to Ghana is one of the best moves he’s ever made. 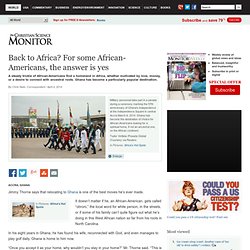 Skip to next paragraph Subscribe Today to the Monitor Click Here for your FREE 30 DAYS ofThe Christian Science MonitorWeekly Digital Edition It doesn’t matter if he, an African-American, gets called “obroni,” the local word for white person, in the streets, or if some of his family can’t quite figure out what he’s doing in this West African nation so far from his roots in North Carolina. In his eight years in Ghana, he has found his wife, reconnected with God, and even manages to play golf daily.

“Once you accept it as your home, why wouldn’t you stay in your home?” Whether motivated by love, money, or the desire to rekindle a long-lost connection, black repatriation to Africa remains alive and well, even if it never quite became the high-volume, emotional return to African roots that initially captured the imagination of black intellectuals and celebrities like boxer Mohammad Ali decades ago. Bridging the divide: Africa’s diaspora willing to invest back home.

Pages: 1 2 When El Hadji Sall left Senegal as a young man to study electrical engineering at Howard University in Washington, DC, he planned to return home upon graduation. 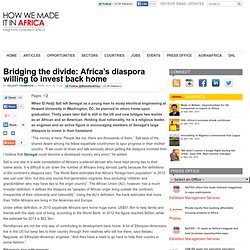 Thirty years later Sall is still in the US and now bridges two worlds as an African and an American. Holding dual nationality, he is a religious leader, an engineer and an active figure in encouraging members of Senegal’s large diaspora to invest in their homeland. “The money is here. People like me, there are thousands of them,” Sall says of the shared desire among his fellow expatriate countrymen to spur progress in their mother country. Sall is one star in a wide constellation of Africans scattered abroad who have kept strong ties to their native lands. Under either definition, in 2010 expatriate Africans sent home huge sums: US$51.9bn to help family and friends with the daily cost of living, according to the World Bank.

Remittances are not the only way of contributing to development back home. Mozilla To Launch $25 Smartphone. VENTURES AFRICA – Mozilla has announced that it will offer a new category of $25 smartphones for developing countries, adding that despite the close to pricing, the device still holds advance mobile capabilities. 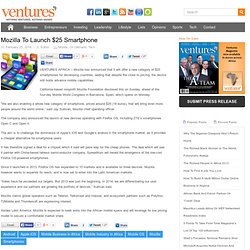 California-based nonprofit Mozilla Foundation disclosed this on Sunday, ahead of the four-day Mobile World Congress in Barcelona, Spain, which opens on Monday. “We are also enabling a whole new category of smartphone, priced around $25 (18 euros), that will bring even more people around the world online,” said Jay Sullivan, Mozilla chief operating officer. The company also announced the launch of new devices operating with Firefox OS, including ZTE’s smartphones Open C and Open II. The aim is to challenge the dominance of Apple’s iOS and Google’s android in the smartphone market, as it provides a cheaper alternative for smartphone users.

It has therefore signed a deal for a chipset which it said will pave way for the cheap phones. Africa is on the cusp of an investment boom. Famously branded “the hopeless continent” by The Economist just over a decade ago, Africa has so belied downbeat projections that this March the same magazine published a special report with the opposite sentiment, titled “Africa rising”. 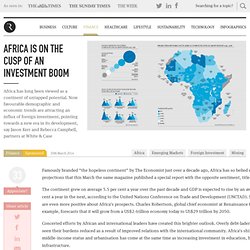 The continent grew on average 5.5 per cent a year over the past decade and GDP is expected to rise by an average of 6 per cent a year in the next, according to the United Nations Conference on Trade and Development (UNCTAD). Some economists are even more positive about Africa’s prospects. Charles Robertson, global chief economist at Renaissance Capital, for example, forecasts that it will grow from a US$2-trillion economy today to US$29 trillion by 2050.

Concerted efforts by African and international leaders have created this brighter outlook. Overly debt-laden nations have seen their burdens reduced as a result of improved relations with the international community. Foreign direct investment (FDI) is playing a major role too. Facebook reportedly buying drone maker to bring internet to developing countries. Africa, it's time to Connect, Collaborate and Conquer - Homecoming Revolution. There has never been a more exciting time for collaboration between those at home and those in the Diaspora. 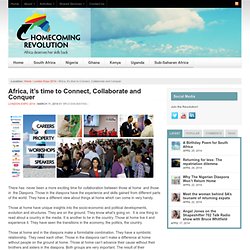 Those in the diaspora have the experience and skills gained from different parts of the world. Winning in Africa: From Trading Posts to Ecosystems - file152297.pdf. Middle class Africa: meet the new African consumer. American politician Steve Forbes was a guest at the launch of Mosunmola Abudu's new African TV channel. 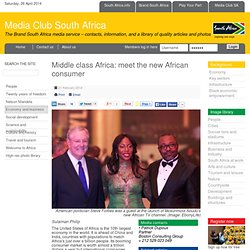 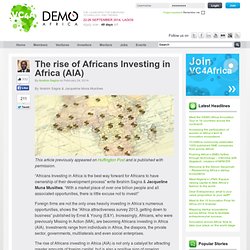 “Africans Investing in Africa is the best way forward for Africans to have ownership of their development process” write Ibrahim Sagna & Jacqueline Muna Musiitwa. “With a market place of over one billion people and all associated opportunities, there is little excuse not to invest!” Foreign firms are not the only ones heavily investing in Africa’s numerous opportunities, shows the “Africa attractiveness survey 2013, getting down to business” published by Ernst & Young (E&Y).

Private Sector Trending AIA is not limited to African conglomerates. Take Away Home. ‘The diaspora has a chance to be part of something big in Africa’ “I love it here. 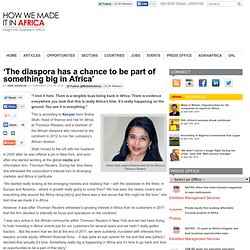 30 Most Promising Young Entrepreneurs In Africa 2014. Investec Asset Management targets mid-sized African companies. Towards the end of last year Investec Asset Management, a business within the global financial group, announced it has made a private equity investment into Daraju Industries, a Nigerian-based manufacturer and distributor of toothpaste, soaps and detergents aimed at the emerging consumer. 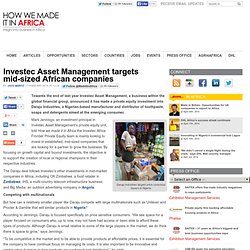 Daraju Industries targets price conscious buyers in Nigeria. Mark Jennings, an investment principal in Investec Asset Management’s private equity unit, told How we made it in Africa the Investec Africa Frontier Private Equity team is mainly looking to invest in established, mid-sized companies that are looking for a partner to grow the business. By focusing on growth capital and buyout investments, the objective is to support the creation of local or regional champions in their respective industries.

Les plus grands pôles en Afrique. BUSINESS Familles riches cherchent continent à adopter. Deciding on where to play and how to win in Africa. FMCG companies wanting to expand into Africa require a strategic assessment of 'where to play' - which country, region and city to go into - and they require a solid 'how to win' approach of selecting the winning route-to-market. 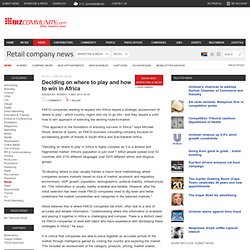 "This approach is the foundation of ensuring success in Africa," says Michael Wood, director of Aperio, an FMCG business consulting company focused on accelerating growth of brands in South Africa and Sub-Saharan Africa. "Deciding on 'where to play' in Africa is highly complex as it is a diverse and fragmented market: Africa's population is just over 1 billion people spread over 53 countries with 2110 different languages over 3315 different ethnic and religious groups. "Evaluating 'where to play' usually follows a macro level methodology where companies assess markets based on size of market, economic and regulatory environment, GDP growth, population, demographics, political stability, infrastructure etc. Footprint in Africa.pdf. Private equity in Africa: warming up for 2014.

Africa set for free Wi-Fi boost this year. Africa is set to see an increase in the number of free Wi-Fi hotspots in 2014, in line with recent moves to connect entire cities in both Rwanda and South Africa. According to Ruckus Wireless, a company specialising in Wi-Fi infrastructure, initiatives based on those implemented in Kigali, Rwanda, and the City of Tshwane, South Africa, will become commonplace this year.

HumanIPO reported in November the City of Tshwane, in partnership with the non-profit Project Isizwe, was rolling out the first phase of free Wi-Fi for the city. Just a few months earlier, it was announced that the Smart Kigali initiative was planning to set-up free Wi-Fi zones in the Rwandan capital. “2014 is set to be a watershed year for Wi-Fi,” the company said, predicting a worldwide increase in hotspots to 5.8 million by 2015, up 350 per cent from 1.3 million in 2011. 20131205 Deloitte-on-Africa-The-New-Economies-in-Africa.pdf.

Contact72_page-à-page_GB. Jan-2014-Database-spreadsheet.pdf. Risk opportunity matrix for Consumer Goods & Svcs sector [2013 Data. Africa's Booming Oil and Natural Gas Exploration and Production: National Security Implications for the United States and China - PUB1186.pdf. Investing in sub-Saharan Africa. 10 Jan, 2014. Africa Macro_5 trends powering Africa's allure (trend 1-Demographics).pdf. Foresight Africa: Top Priorities for the Continent in 2014. The Largest English Weekly in Ethiopia. Not since the countries of Africa tossed out their colonial masters several decades ago has there been this much optimism and excitement about the continent’s prospects. While China’s economic expansion has slowed, and Europe and the United States try to dig themselves out of a recession, Africa has not only weathered an up-and-down global economy – it has been booming.

Real gains are finally being made on the ground in Africa today – ones that speak to the possibility of a breakout phase that would lift millions out of utter poverty and great misery. Let us start with the numbers. According to International Monetary Fund (IMF) data, Sub-Saharan Africa has grown at an annual rate of 4.8pc over the last five years – a period that includes the trauma of the global financial crisis. That means it has outperformed other developing regions and it blows out of the water the advanced economies, which expanded just 0.5pc per year. No wonder there is so much excitement. 2014’s Hottest Emerging Locations for Global BPO (Part 1): AFRICA - GlobalServices. As the need to establish global service delivery has become more prominent, emerging locations are capturing a lot of attention, especially in business and knowledge based outsourced services (BPO &KPO).

Register now and save $400! We tend to have certain paradigms about the “developed world” and the “developing world.” Including, of course, media-fed images of Africa as a place of almost irredeemable poverty, deprivation, and pain. Many of our paradigms are, of course, illusions. A new report on the African telecommunications market highlights that mobile penetration in Africa hit 80 percent in the first quarter of this year and is still growing at 4.2 percent annually.

Stock Exchanges & their Market Capitalizations(exl. Debt) [2009 Data. Africa has highest tax rate of any region. AFRICA still has the highest total tax rate of any region at almost 53%, compared to the world average of 43% and South Africa’s 30%, according to the latest Paying Taxes 2014 report released by the World Bank and professional services firm PwC. Although Africa’s average total tax rate has fallen by 16 percentage points since 2004 as a result of the replacement of cascading sales tax systems with value added tax systems, the continent’s lack of electronic filing systems contributed most to the difficulty of paying taxes.