African Commission on Human and Peoples' Rights. African Commission on Human and Peoples' Rights. The Lost Girls. "We Were Sent to Kill You" Sitreps Detail Rwanda's Descent into Genocide 1994. Washington, DC, April 7, 2014 –The complete series of daily and weekly situation reports (sitreps) written by UN peacekeepers in Rwanda — published today by the National Security Archive for the first time in full — provides a detailed, on-the-ground perspective on the genocide in Rwanda that started twenty years ago today. 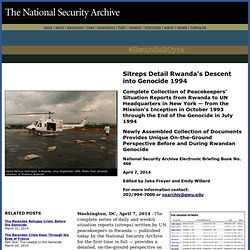 Today's posting is a collection of every single sitrep from the beginning of the United Nations Assistance Mission for Rwanda (UNAMIR) in October 1993 to the end of the genocide on July 18, 1994.[1] The documents tell a story of the broken Rwandan political system and a peacekeeping force that, because of a lack of support from UN headquarters in New York and from the members of the UN Security Council, was not equipped to handle the rising violence. UN Peacekeeping Troops in Rwanda circa September 1994. China-based corporate web behind troubled Africa resource deals. For centuries, wave after wave of colonists and foreign investors have swept through Africa, looking for profits from the continent’s abundant reserves of oil and prized minerals. 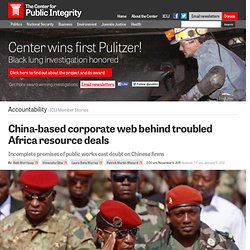 Many instead left records of corruption and broken promises of shared wealth with Africans. It is against this backdrop that an eager conglomerate has recently been drawing attention and generating headlines throughout Africa. China-Sonangol is part of a global network of companies extracting oil in Angola, buying gold in Zimbabwe, building luxury condominiums in Singapore and developing property in Manhattan.

MENA (the Middle-East & North Africa) Map Room: Hidden Waters. InFocus » What Does the Fall of Goma Mean for Central Africa? Israel Siphons off Africa’s Nile. Egyptian and Sudanese policy failures have lead to a looming strategic threat to both countries’ most important resources – the Nile. 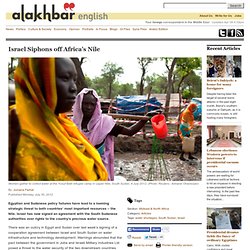 “The Ugandan People’s Defense Force (UPDF) uses this intelligence in planning and conducting offensive operations, including both capture and lethal operations, against the LRA in Uganda, the Democratic Republic of Congo (DRC), Southern Sudan, and the Central African Republic (CAR),” the cable explains. Niger Delta: a quiet resistance. 2nd explosion strikes near Nigeria church by Jos. LAGOS, Nigeria (AP) -- Suspected Muslim extremists kidnapped about 100 girls Tuesday from a school in northeastern Nigeria, less than a day after militants bombed a bus station and killed 75 people in the capital - a surge of violence that raised new doubts about the military's ability to contain an Islamic uprising. 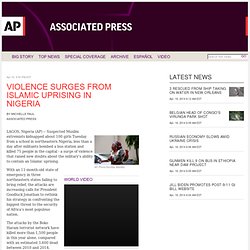 With an 11-month-old state of emergency in three northeastern states failing to bring relief, the attacks are increasing calls for President Goodluck Jonathan to rethink his strategy in confronting the biggest threat to the security of Africa's most populous nation. The attacks by the Boko Haram terrorist network have killed more than 1,500 people in this year alone, compared with an estimated 3,600 dead between 2010 and 2014. Ethiopia charges six journalists with terrorism. France, Africa: Suitcases Filled with Cash Expose the Françafrique Connection. In the wake of the Dominique Strauss Kahn scandal, a new furore is now rocking France and the upcoming 2012 French presidential campaign. 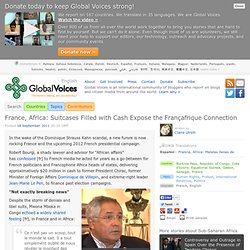 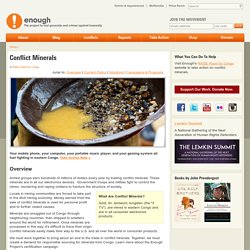 Take Action Now » Overview Armed groups earn hundreds of millions of dollars every year by trading conflict minerals. The Price of Precious. The first child soldier pops out of the bush clutching an AK-47 assault rifle in one hand and a handful of fresh marijuana buds in the other. 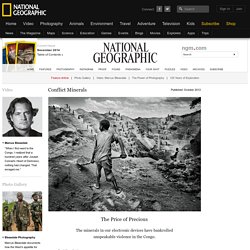