The complete correspondence. Ohio Memory, a product of the Ohio Historical Society and the State Library of Ohio. DRC Home. Ohiohistory.org. NYPL Digital Collections. New Deal Network: The Great Depression, the 1930s, and the Roosevelt Administration.

National Museum of the American Indian. National Archives and Records Administration. Making the History of 1989. The Fall of Communism in Eastern Europe IntroductoryEssay Sets the scene for the events of 1989 and explains their significance in world history. 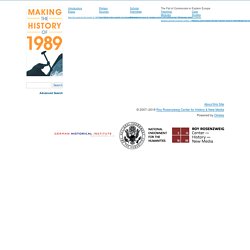 PrimarySources Over 300 primary sources, including government documents, images, videos, and artifacts with introductory notes. ScholarInterviews Four scholars focus on the history & events surrounding 1989 through primary sources. Making of America. Aking of America (MoA) is a digital library of primary sources in American social history from the antebellum period through reconstruction. 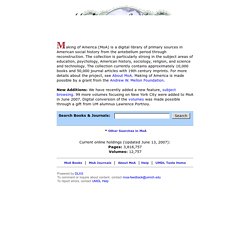 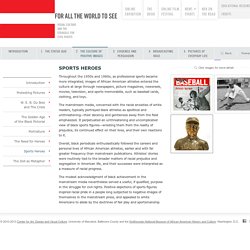 The mainstream media, concerned with the racial anxieties of white readers, typically portrayed black athletes as apolitical and unthreatening—their decency and gentleness away from the field emphasized. It perpetuated an unthreatening and uncomplicated view of black sports figures—wresting them from the reality of prejudice, its continued effect on their lives, and their own reactions to it. Overall, black periodicals enthusiastically followed the careers and personal lives of African American athletes, earlier and with far greater frequency than mainstream publications. The Martin Luther King, Jr., Research and Education Institute. Visualizing Emancipation. The Frederick Douglass Papers Edition: Home. Teenie Harris Archive. InMotion: The African-American Migration Experience. African American History. 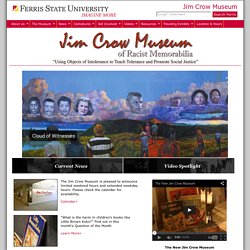 The Museum features six exhibit areas -- Who and What is Jim Crow, Jim Crow Violence, Jim Crow and Anti-Black Imagery, Battling Jim Crow Imagery, Attacking Jim Crow Segregation, and Beyond Jim Crow. The Museum also offers a comprehensive timeline of the African American experience in the United States. The timeline is divided into six sections: Africa Before Slavery, Slavery in America, Reconstruction, Jim Crow, Civil Rights and Post Civil Rights. Freedmen and Southern Society Project - Main Page. National Underground Railroad Freedom Center. Trans-Atlantic Slave Trade. Roll over names of designated regions on the map above for descriptions of the role of each in the trans-Atlantic slave trade.

The North American mainland played a relatively minor role in the trans-Atlantic slave trade. Its ports sent out less than five percent of all known voyages, and its slave markets absorbed less than four percent of all slaves carried off from Africa. An intra-American trade in slaves – originating in the Caribbean - supplied additional slaves, however. World History. World History 2. World History Matters » A Portal to World History Sites from the Center for History and New Media. A Visual Sourcebook of Chinese Civilization. The Victorian Web: An Overview. Universal Leonardo: Leonardo da Vinci online › Welcome to Universal Leonardo. 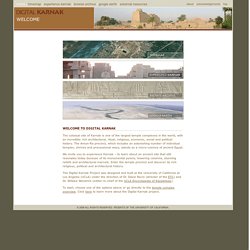 The Amun-Ra precinct, which includes an astonishing number of individual temples, shrines and processional ways, stands as a micro-cosmos of ancient Egypt. We invite you to experience Karnak – to learn about an ancient site that still resonates today because of its monumental pylons, towering columns, stunning reliefs and architectural marvels. Enter the temple precinct and discover its rich religious, political and architectural history. The Digital Karnak Project was designed and built at the University of California at Los Angeles (UCLA) under the direction of Dr. Diane Favro (director of the ETC) and Dr. To start, choose one of the options above or go directly to the Temple complex overview. Dēmos: Classical Athenian Democracy. Starting Points The Evidence for Athenian Democracy · Christopher Blackwell · article · Necessary Context: descriptions of the ancient genres, authors, and works that form our textual evidence for Athenian democracy · Christopher Blackwell, Christopher Cotten, David Phillips, & Hershal Pleasant. · article · 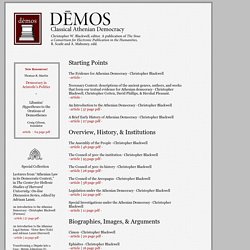 Al-Mizan. ‘Al-Mizan’ is the Arabic word for balance - both the familiar measuring instrument and the metaphorical pursuit of justice and harmony in all human endeavours. 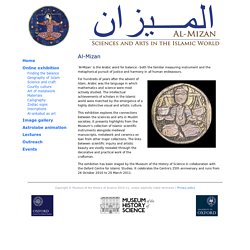 For hundreds of years after the advent of Islam, Arabic was the language in which mathematics and science were most actively studied. The intellectual achievements of scholars in the Islamic world were matched by the emergence of a highly distinctive visual and artistic culture. This exhibition explores the connections between the sciences and arts in Muslim societies. It presents highlights from the Museum’s collection of Islamic scientific instruments alongside medieval manuscripts, metalwork and ceramics on loan from other major collections.

Smithsonian Natural History Web: African Voices. The Galileo Project. Children and Youth in History. Survivor Stories. Coming of Age features twelve stories of Holocaust survivors and one story of an individual who grew up in the Mandate of Palestine during the same period. 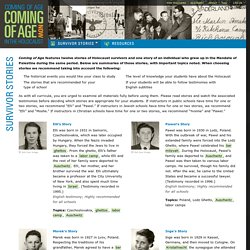 Below are summaries of those stories, with important topics noted. When choosing stories we recommend taking into account the following: The historical events you would like your class to studyThe level of knowledge your students have about the HolocaustThe stories that are recommended for your type of schoolIf your students will be able to follow testimonies with English subtitles As with all curricula, you are urged to examine all materials fully before using them. Encyclopædia Iranica. Women Working - , 1800–1930. National Portrait Gallery. David M. Rubenstein Rare Book & Manuscript Library. Elizabeth Harris Johnson Memoir, 1867-1923 Elizabeth Johnson Harris was born in Augusta, Georgia, in 1867 to parents who had been slaves. 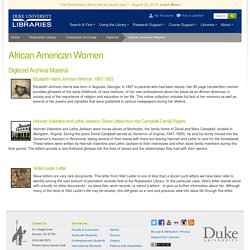 WOMEN IN WORLD HISTORY. Women and Social Movements in the United States, 1600-2000. National Women's History Museum - NWHM. David M. Rubenstein Rare Book & Manuscript Library. Rose O'Neal Greenhow Papers Rose O'Neal Greenhow was born in Montgomery County, Maryland in 1817. "Wild Rose", as she was called from a young age, was a leader in Washington society, a passionate secessionist, and one of the most renowned spies in the Civil War.