RMS Queen Mary. Queen Mary sailed on her maiden voyage on 27 May 1936 and captured the Blue Riband in August of that year; she lost the title to SS Normandie in 1937 and recaptured it in 1938. 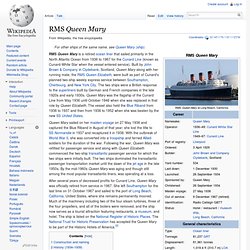 With the outbreak of World War II, she was converted into a troopship and ferried Allied soldiers for the duration of the war. Following the war, Queen Mary was refitted for passenger service and along with Queen Elizabeth commenced the two-ship transatlantic passenger service for which the two ships were initially built. The two ships dominated the transatlantic passenger transportation market until the dawn of the jet age in the late 1950s. By the mid-1960s Queen Mary was aging and though still among the most popular transatlantic liners, was operating at a loss. After several years of decreased profits for Cunard Line, Queen Mary was officially retired from service in 1967. Construction and naming[edit] Overhead view of Queen Mary docked at Long Beach in 2008 History (1934–1939)[edit] R. M. S. Queen Mary. RMS Queen Mary. The Queen Mary was a virtual floating city, travelling between Southampton and New York. 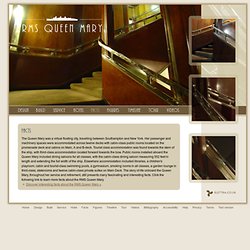 Her passenger and machinery spaces were accommodated across twelve decks with cabin-class public rooms located on the promenade deck and cabins on Main, A and B-deck. Tourist class accommodation was found towards the stern of the ship, with third-class accommodation located forward towards the bow. Public rooms installed aboard the Queen Mary included dining saloons for all classes, with the cabin-class dining saloon measuring 552 feet in length and extending the full width of the ship. 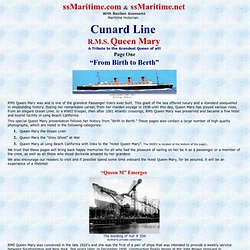 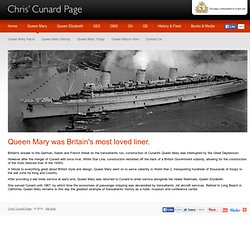 However after the merger of Cunard with once rival, White Star Line, construction restarted off the back of a British Government subsidy, allowing for the construction of the most beloved liner of the 1930's. A tribute to everything great about British style and design, Queen Mary went on to serve valiantly in World War 2, transporting hundreds of thousands of troops to the war zone for King and Country. After providing a war bride service at war's end, Queen Mary was returned to Cunard to enter service alongside her newer fleetmate, Queen Elizabeth. 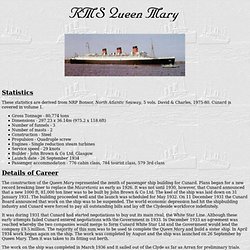 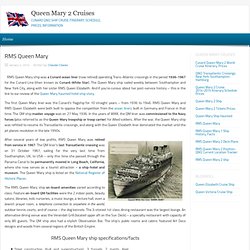 R.M.S. QUEEN MARY. All photos Copyright Rob O'Brien 2008, 2009 & 2012 Today the ship has been part of the Long Beach skyline longer than she has been at sea as a transatlantic liner. Notice the signboard on the entrance tower along with the Russian submarine, SCORPION. A "real" bridge, full of traditional wood and brass, a thing of the past and absent in most modern day passengers ships. .

Queen Mary Home. Above: A colorized starboard profile of the R.M.S. 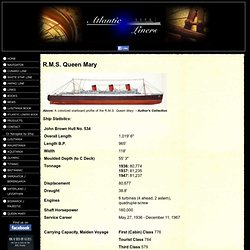 Queen Mary. - Author's Collection Ship Statistics: One-Of-A-Kind Long Beach Experience, Tours, Events, Dining & more... Titanic and Queen Mary - A Brief Comparison. RMS Queen Mary - 1936 RMS Titanic - 1912 These pictures are to scale in relation to each other: The Queen Mary is about 140 feet longer than the Titanic was. 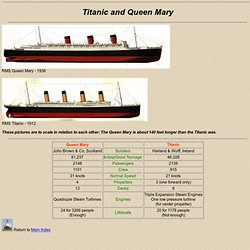 Return to Main Index. QUEENMARYVIRTUALTOUR. Queen Mary: Long Beach's Royal Lady, Go World Travel Online Magazine. The Titanic may be the most famous ship in history, but the majestic Queen Mary is an even bigger ship with a fascinating history all her own. 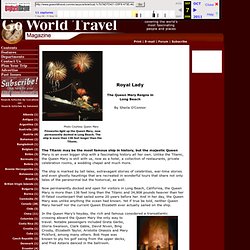 Unlike the Titanic, the Queen Mary is still with us, now as a hotel, a collection of restaurants, private celebration rooms, a wedding chapel and much more. The ship is marked by tall tales, extravagant stories of celebrities, war-time stories and even ghostly hauntings that are recreated in wonderful tours that share not only tales of the paranormal but the historical, as well. 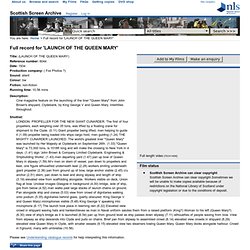 Sometimes we will be unable to make copies available because of restrictions on the National Library of Scotland under copyright legislation or due to the conditions of deposit. Full record for '"MAURETANIA" AND "RMS QUEEN MARY"' Video 1 (currently displayed video) Queen Mary digitally restored version. (clip) [84242200] Video 2. The Ephemera Society - Report from across the pond: RMS Queen Mary maiden voyage covers. John Sayers The umbrella of ephemera shelters collectors with a wide range of specialist interests.

Although they may find a highly specialist corner such as philately or deltiology, they will invariably find a kindred spirit in the broader universe of ephemera collectors. This note is about one of those cross-disciplinary elements of collecting. Members of The Ephemera Society will have read (with pleasure, I hope) my article in the Autumn, 2011 issue of The Ephemerist on the early years of RMS Queen Mary. One of the illustrations, a Maiden Voyage souvenir postal cover, struck a particularly personal chord of my memory as a former stamp collector in my early years some 50 years ago. Such covers are not under the rubric of First Day Covers, but are the more difficult to define Commemorative Covers. Let's begin with the cover above, illustrated in my article in The Ephemerist, and watch the beauties parade past us. This cover is a pleasant study in red and blue.

. © John G Sayers 2011. Letters and memories: the r.m.s. queen mary. Funnel2.jpg (JPEG Image, 800 × 574 pixels) The Queen Mary... Haunted? #Believe it or not, it wasn't the grand allure of the luxurious Queen Mary ocean liner that prompted me to stay there recently. Nor was it the many historically fascinating facts attributed to its name. #No, the reason I went there, pure and simple, was because of the many rumors I had heard regarding the ship being haunted. #On a beautiful October morning, myself and my assistant, the lovely Ms. Anthropy, went for a drive from San Diego to Long Beach. Once we arrived and checked in, I must admit that I was immediately impressed not only by the size of the ship (it has an overall length of 1,019 feet, a height of 181 feet, and weighs roughly 81,237 tons) but also by its elegance.

#After a quick lunch, it was off to exploring for the both of us. #Down in the darkened bowels of the ship, my eyes were focused not only on the massive equipment used to run such a vessel, but on every corner and crevice. The Queen Mary - Top 10 Haunted Places. Ghosts and Spirits of the RMS Queen Mary - Home. The RMS Queen Mary: The Most Haunted Place in America. She's a war hero and a celebrity.

She's been the subject of books and the star of both TV and movies. Some people say that she's a haunted lady.