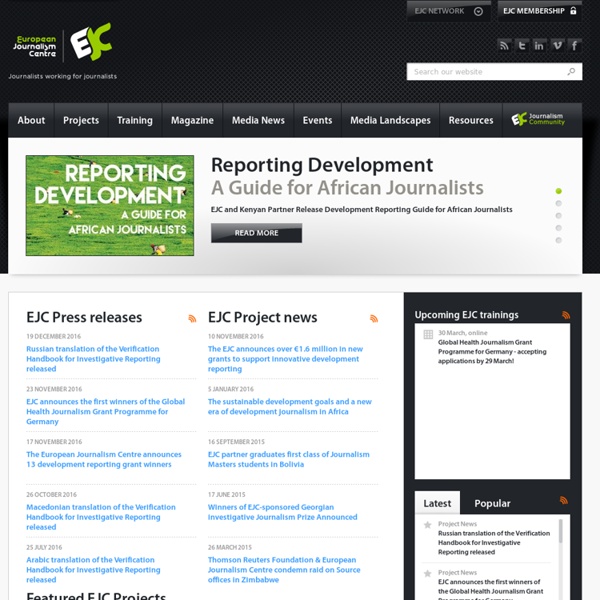 10 December 2013 Guide to funding opportunities for cultural journalists in Europe For any cultural journalist, or arts media professional, attending international events is a vital part of the job. However, as a niche specialisation, it can be difficult to secure funding to attend these events. This Guide provides a comprehensive list of resources and funding opportunities to support journalists, as well as other professionals in the cultural sectors. Read more

About this website We are a hub for news and resources from the community of journalists, editors, designers and developers who use data in the service of journalism. On our site you’ll be able to: Get a behind the scenes look at data journalism projects from around the world;Learn about new tools and methods for how to work with data effectively;Find out and get informed about training events and job opportunities in your area;Stay on top of the latest developments in the field. The website is part of the European Journalism Centre’s Data Driven Journalism initiative. Data Driven Journalism is one of the leading initiatives for training, resources and networking in the area of data journalism. Founded in 2010, the programme is dedicated to accelerating the diffusion and improving the quality of data journalism around the world, whether the focus is on investigations, news applications, putting news into context, or simply using data to inform and assist journalistic work.

A Fossil Fuel-Free World is Possible: How to Power a Warming Earth Without Oil, Coal and Nuclear This is a rush transcript. Copy may not be in its final form. AMY GOODMAN: Neil Young singing, ["Who’s Gonna Stand Up? (And Save the Earth)] This is Democracy Now!

Using Data Visualization as a Reporting Tool Can Reveal Story’s Shape Readers have come to rely on interactive presentations to understand complicated stories, using them to zoom in on periods of time and highlight areas of interest. Yet to investigate these stories, reporters often create what amounts to handcrafted investigative art: flow charts with circles and arrows, maps shaded with highlighters and stuck with pins. More and more, though, some reporters are using data visualization tools to find the story hidden in the data. Those tools help them discover patterns and focus their reporting on particular places and times. Many of the presentations, which can have rough interfaces or less-than-sleek design, are never published. A Changing Climate Movement — Natural Resources Defense Council I had the honor of giving the keynote speech at The New School’s TEDC Earth Day 2015 celebration, “Earth Matters: Designing our Future.” The following is an adapted excerpt from my remarks on the importance of growing the climate movement and involving the next generation. At the turn of the 20th century, President Teddy Roosevelt established the most audacious land and wildlife protections the world has ever known, creating national parks, game preserves, 150 national forests, and new federal agencies to oversee them all. And when Congress threatened to reverse those efforts, President Roosevelt was supported by a growing movement of people — rich and poor, soldiers and scientists — who shared a love of this land and believed that government had a responsibility to protect it. Every time our country has faced ecological catastrophe, previous generations of Americans have risen to the occasion.

#ijf11: Lessons in data journalism from the New York Times Follow this link or scroll to the bottom to start by hearing more from New York Times graphics editor Matthew Ericson on what kind of people make up his team and how they go about working on a story The New York Times has one of the largest, most advanced graphics teams of any national newspaper in the world. Yesterday at the International Journalism Festival, NYT deputy graphics editor Matthew Ericson led an in-depth two-hour workshop on his team’s approach to visualising some of the data that flows through the paper’s stories every day. He broke the team’s strategy down in to a few key objectives, the four main ones being: Provide contextDescribe processesReveal patternsExplain the geography

Voices: News organizations must become hubs of trusted data in a market seeking (and valuing) trust Editor’s Note: American readers may know Geoff McGhee for his video project Journalism in the Age of Data, released to acclaim last fall. Here he teams up with two European colleagues — Mirko Lorenz, a German information architect and journalist, and Nicolas Kayser-Bril, head data journalist at OWNI in France — to argue that news organizations should restructure themselves as data generators, gatherers, and analyzers. They believe that selling trusted data should be the foundation of journalism’s new business model.

Media Companies Must Become Trusted Data Hubs This article was written by Mirko Lorenz, information architect (Cologne, Germany), Nicolas Kayser-Bril, head datajournalist at OWNI (Paris, France), and Geoff McGhee, online journalist who created Journalism in the Age of Data (Stanford). It was started by a tweet from @mirkolorenz which led up, 20 days later, to this piece which aims at inspiring media companies, showing new editorial and business opportunities. Journalists and media companies in general have had to answer a fundamental question ever since their traditional business model collapsed: What are we? In the old days, it was easy.

Vortex Bladeless: a wind generator without blades What is your swept area? Our working area is a circular area around the tipping point of the equipment. People often confuse the swept areas of Vortex and that of a HAWT, but keep in mind that our equipment relies on oscillation, not on the rotation of the blades, so our swept area has a different shape – it’s a triangle rather than a circle. We need to be much higher to have the same swept area, in fact, it is almost twice as high.

Data driven journalism Data-driven journalism, often shortened to "ddj", is a term in use since 2009/2010, to describe a journalistic process based on analyzing and filtering large data sets for the purpose of creating a news story. Main drivers for this process are newly available resources such as "open source" software and "open data". This approach to journalism builds on older practices, most notably on CAR (acronym for "computer-assisted reporting") a label used mainly in the US for decades.

Visual storytelling: 14 tools for journalists Credit: Image by TapiF on Flickr. Some rights reserved Over the past year here at Journalism.co.uk we have reported on a number of new tools and platforms which have been launched or updated, which offer journalists different ways of telling stories visually. Our news:rewired events have also highlighted a number of those tools, most recently in a dedicated session on visual storytelling at news:rewired - digital stories, which was held last Thursday (6 December). Here is a list of just 14 tools that journalists might find useful. Robots Get a Grip on Meat and Vegetables It is less striking than Deep Blue’s victory over chess champ Garry Kasparov, but Richard van der Linde says that his robotic hand’s mastery at picking up cabbage is something of a milestone for machines. With the aid of five cameras, plus sensors in its wrist to monitor the resistance it encounters, the three-fingered gripper can carefully pick up a cabbage, reorient it, and place it into a machine that removes the core. “In industry, only humans can do that at the moment,” says van der Linde. His company Lacquey, based in Delft, the Netherlands, is working with FTNON, a manufacturer of food-processing equipment, to get the technology ready to go to work inside the giant chillers where today humans process cabbage, lettuce, and other produce for packaging. ­

The growing importance of data journalism One of the themes from News Foo that continues to resonate with me is the importance of data journalism. That skillset has received renewed attention this winter after Tim Berners-Lee called analyzing data the future of journalism. When you look at data journalism and the big picture, as USA Today’s Anthony DeBarros did at his blog in November, it’s clear the recent suite of technologies is part of a continuum of technologically enhanced storytelling that traces back to computer-assisted reporting (CAR).

Michelle Minkoff » Bringing data journalism into curricula As a recently graduated Medillian (yay for entering the “real world, boo for having to leave such a nurturing and wonderful place), I’ve been thinking a lot about data journalism and my generation. Why were there so few students at NICAR? Yes, it costs money to get to a conference, but I’m not even seeing all that many on NICAR-L. Perhaps it’s not as snazzy or attractive as video or Flash, but I maintain that the Web cries out for data, and with the right mentality, it’s even more interesting than these other journalism subsets. Data journalism ought to be something every journalist is familiar with, and at least considers as a possible specialization.