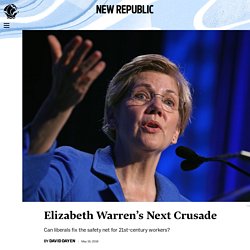 There’s nothing new about modifying the rules to accommodate new technologies, so workers can share in the wealth produced by them. There’s also nothing new about a “gig economy” service like Uber: Long before anybody knew what an app was, employers were moving to classifying their workers as independent contractors to shirk their responsibilities. On-demand work prospered after the recession because workers needed to fund their own safety nets or find stopgap work in a tough job market.

“For many,” Warren said, “the gig economy is simply the next step in a losing effort to build some economic security in a world where all the benefits are floating to the top 10 percent.” Obama Calls Elizabeth Warren ‘Absolutely Wrong’ on Trade Deal. With Eyes on Possible Clinton Run, Questions on Room for Other Women. Perpetual bonds: A clever way to manage the national debt in a time of low interest rates. Painting by William Hoare/National Portrait Gallery, London/Wikimedia Commons. 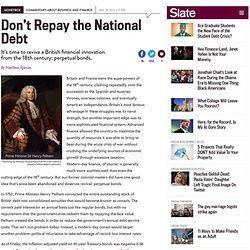 Britain and France were the superpowers of the 18th century, clashing repeatedly over the succession to the Spanish and Austrian thrones, overseas colonies, and eventually American independence. Britain’s most famous advantage in these struggles was its naval strength, but another important edge was its more sophisticated financial system. Advanced finance allowed the country to maximize the quantity of resources it was able to bring to bear during the acute crisis of war without crushing the underlying sources of economic growth through excessive taxation. Modern-day finance, of course, is generally much more sophisticated than even the cutting edge of the 18th century. But our former colonial masters did have one good idea that’s since been abandoned and deserves revival: perpetual bonds. As of Friday, the inflation-adjusted yield on 10-year Treasury bonds was negative 0.56 percent. Except it doesn’t. Bp20.jpg (Image JPEG, 990x660 pixels) Elizabeth Warren to supporters: ‘This victory belongs to you’ 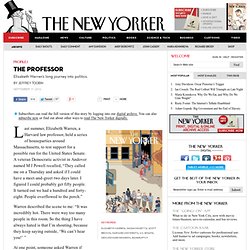 A veteran Democratic activist in Andover named M J Powell recalled, “They called me on a Thursday and asked if I could have a meet-and-greet two days later. I figured I could probably get fifty people. It turned out we had a hundred and forty-eight. People overflowed to the porch.” Elizabeth Warren's Native American Question. There used to be a building on Harvard Yard called Indian College; that was three and a half centuries ago, when Harvard was new. 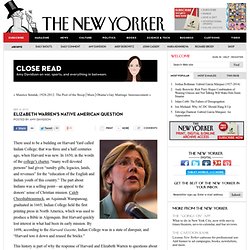 In 1650, in the words of the college’s charter, “many well devoted persons” had given “sundry gifts, legacies, lands, and revenues” for the “education of the English and Indian youth of this country.” The part about Indians was a selling point—an appeal to the donors’ sense of Christian mission. Caleb Cheeshahteaumuck, an Aquinnah Wampanoag, graduated in 1665; Indian College held the first printing press in North America, which was used to produce a Bible in Algonquin. But Harvard quickly lost interest in what had been its early mission. Elizabeth Warren Ancestor Rounded Up Cherokees For Trail of Tears. After researching her story, it is obvious that her "family lore" is just fiction. 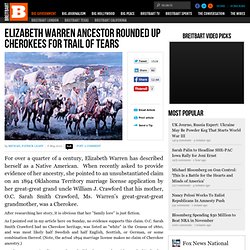 As I pointed out in my article here on Sunday, no evidence supports this claim. O.C. Sarah Smith Crawford had no Cherokee heritage, was listed as "white" in the Census of 1860, and was most likely half Swedish and half English, Scottish, or German, or some combination thereof. (Note, the actual 1894 marriage license makes no claim of Cherokee ancestry.) But the most stunning discovery about the life of O.C. This new information about Ms. Jonathan Crawford, O.C. These were the troops responsible for removing Cherokee families from homes they had lived in for generations in the three states that the Cherokee Nations had considered their homelands for centuries: Georgia, North Carolina, and Tennessee. 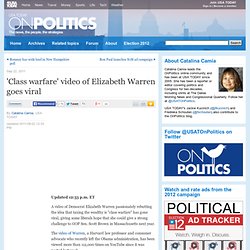 ET A video of Democrat Elizabeth Warren passionately rebutting the idea that taxing the wealthy is "class warfare" has gone viral, giving some liberals hope that she could give a strong challenge to GOP Sen. Scott Brown in Massachusetts next year. Elizabeth Warren makes history as state's first female U.S. senator.

A Welcome Advocate for Social Security Disability and SSI Claims. How Elizabeth Warren Became a Liberal Icon. In January of last year, Elizabeth Warren went on The Daily Show and did what was then, and still is, that rarest of things: She gave a cogent, compelling, almost crystalline account of the financial collapse. 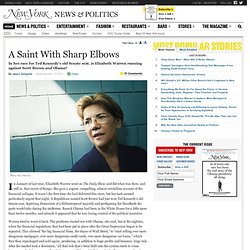 It wasn’t the first time she had delivered this story, but her task seemed particularly urgent that night. A Republican named Scott Brown had just won Ted Kennedy’s old Senate seat, depriving Democrats of a filibusterproof majority and prefiguring the bloodbath the party would take during the midterms. Barack Obama had been in the White House for a little more than twelve months, and already it appeared that he was losing control of the political narrative.

Warren tried to wrest it back.