Amount of dust blown across the West is increasing, says CU-Boulder study. Dust In West Up 500 Percent In Two Centuries, According To New Study Led By CU-Boulder. The West has become 500 percent dustier in the past two centuries due to westward U.S. expansion and accompanying human activity beginning in the 1800s, according to a new study led by the University of Colorado at Boulder. 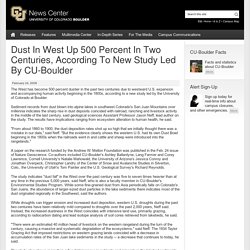 Sediment records from dust blown into alpine lakes in southwest Colorado's San Juan Mountains over millennia indicates the sharp rise in dust deposits coincided with railroad, ranching and livestock activity in the middle of the last century, said geological sciences Assistant Professor Jason Neff, lead author on the study. The results have implications ranging from ecosystem alteration to human health, he said. "From about 1860 to 1900, the dust deposition rates shot up so high that we initially thought there was a mistake in our data," said Neff. Losing Ground. Soil erosion and agricultural sustainability. 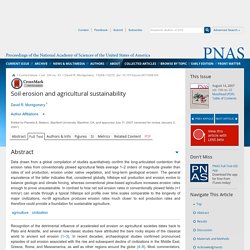 Soil erosion is a complex process that depends on soil properties, ground slope, vegetation, and rainfall amount and intensity (13). Recognizing the potential for accelerated erosion under modern industrial agriculture, the U.S. Results Fig. 1. Fig. 2. Table 1. i1052 5173 17 10 4. Dust Storm Strips Away Australian Topsoil. A low-pressure system off the southeastern corner of Australia was drawing out a cloud of dust on March 20, 2003. 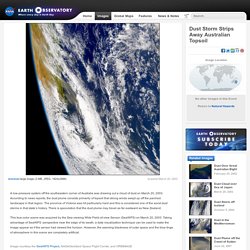 According to news reports, the dust plume consists primarily of topsoil that strong winds swept up off the parched landscape in that region. The province of Victoria was hit particularly hard and this is considered one of the worst dust storms in that state’s history. There is speculation that the dust plume may travel as far eastward as New Zealand. This true-color scene was acquired by the Sea-viewing Wide Field-of-view Sensor (SeaWiFS) on March 20, 2003. Dust Storm in the Great Plains. Parched by months of drought and searing heat, the Great Plains of the United States endured a widespread dust storm in mid-October 2012. 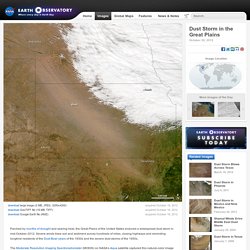 Severe winds blew soil and sediment across hundreds of miles, closing highways and reminding longtime residents of the Dust Bowl years of the 1930s and the severe dust storms of the 1950s. The Moderate Resolution Imaging Spectroradiometer (MODIS) on NASA’s Aqua satellite captured this natural-color image of dust storms in the prairies of the United States around 1:15 p.m. Central Daylight Time on October 18, 2012.

The dust appeared to have source points in southern Nebraska, though more localized sources in Kansas and Oklahoma also may have contributed. All the World's a Stage ... for Dust. Tune in to a NASA website and watch giant dust clouds as they ride global rivers of air, cross-pollinating continents with topsoil and microbes. 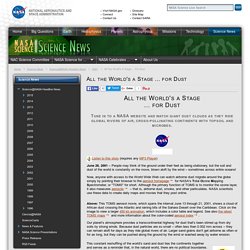 Listen to this story (requires any MP3 Player) June 26, 2001 -- People may think of the ground under their feet as being stationary, but the soil and dust of the world is constantly on the move, blown aloft by the wind -- sometimes across entire oceans! Now, anyone with access to the World Wide Web can watch airborne dust migrate around the globe simply by pointing their browser to the aerosol homepage for NASA's Total Ozone Mapping Spectrometer, or "TOMS" for short.

Although the primary function of TOMS is to monitor the ozone layer, it also measures aerosols -- that is, airborne dust, smoke, and other particulates. NASA scientists use these data to create daily maps and movies that they post online. Our planet's atmosphere provides a transcontinental highway for dust that's been stirred up from dry soils by strong winds. Web Links More Headlines. What If the World’s Soil Runs Out? This is a “what if” interview from the World Economic Forum’s Risk Response Network. 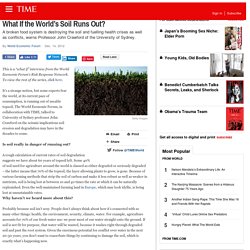 The lowdown on topsoil: It's disappearing. Photo: Andy Rogers/Seattle Post-Intelligencer John Aeschliman shows a spot where rain has washed soil from a neighboring farmer's property onto the road. 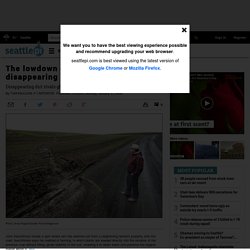 Aeschliman says his method of farming, in which plants are seeded directly into the remains of the previous crop without tilling, gives stability to the soil, enabling it to retain water and preserve the organic matter within it. less John Aeschliman shows a spot where rain has washed soil from a neighboring farmer's property onto the road.