The Benefits of Groundwork Training for Fat Loss. Simply getting up and down off the ground stimulates fat loss, revs your metabolism, and makes it more likely you’ll survive a zombie onslaught. 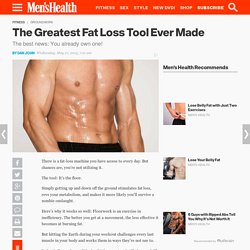 Here’s why it works so well: Floorwork is an exercise in inefficiency. The better you get at a movement, the less effective it becomes at burning fat. But hitting the Earth during your workout challenges every last muscle in your body and works them in ways they’re not use to. In football, we always did a fun fat-loss protocol called grass drills (also known as up-and-downs). We would have to run in place with high knees. Since then, I’ve always incorporated ground-based exercises into my own workout and in my clients’ routines.

Here are some easy ways to add groundwork into your routine. Use Your Rest PeriodKiss the ground between sets with any of the following examples. 1. We use heart rate monitors with many clients, and it’s amazing to see how the heart rate jumps up when they do something like the bird dog. The 10 Best Exercises for a Flat Belly. A flat belly is a badge of honor. 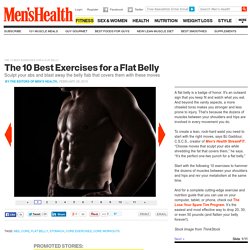 It's an outward sign that you keep fit and watch what you eat. And beyond the vanity aspects, a more chiseled torso makes you stronger and less prone to injury. That’s because the dozens of muscles between your shoulders and hips are involved in every movement you do. To create a lean, rock-hard waist you need to start with the right moves, says BJ Gaddour, C.S.C.S., creator of Men's Health StreamFIT. “Choose moves that sculpt your abs while shredding the fat that covers them,” he says. Start with the following 10 exercises to hammer the dozens of muscles between your shoulders and hips and rev your metabolism at the same time. And for a complete cutting-edge exercise and nutrition guide that you can use on your computer, tablet, or phone, check out The Lose Your Spare Tire Program.

Stock Image from ThinkStock. Why we've all been doing the Fast Diet wrong. •Five day 'fasting' diet slows down ageing and may add years to life •Can fasting help you lose weight and live for longer? 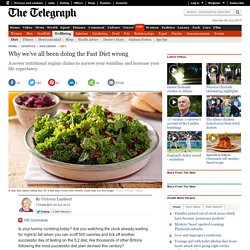 No need to join the slightly warped world of Calorie Restrictors (who consume only 75 per cent of recommended calories a day, and who practise savoury meditation, smelling and thinking about food rather than eating it). Or the breatharians who claim to live by sunlight alone. One of the scientists behind this revolutionary new way of fasting is Prof Valter Longo, Professor in Gerontology and Biological Science at the USC, and Director of its Longevity Institute. Experience may have taught us that typical uber-fasting fanatics tend to be ghastly old geezers who look like they are made of biltong.

But the 47-year old Professor appears to be part Italian midfielder, part Bambi; all in all a rather marvellous walking advertisement for the FMD. Part Italian midfielder, part Bambi (Photo: Dietmar Quistorf): Prof Valter Longo. What is the Dukan Diet? - Medical News Today. The Dukan Diet is a protein based nutritional approach designed by Pierre Dukan, a French nutritionist and dietician. 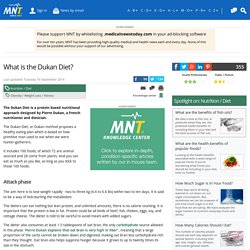 The Dukan Diet, or Dukan method proposes a healthy eating plan which is based on how primitive man used to eat when we were hunter-gatherers. It includes 100 foods, of which 72 are animal sourced and 28 come from plants. And you can eat as much as you like, as long as you stick to those 100 foods. Attack phase The aim here is to lose weight rapidly - two to three kg (4.4 to 6.6 lbs) within two to ten days. The dieters can eat nothing but lean protein, and unlimited amounts, there is no calorie counting. The dieter also consumes at least 1.5 tablespoons of oat bran, the only carbohydrate source allowed in this phase. The Dukan Diet – Attack Phase. Reviewed by Dietitian, Juliette Kellow BSc RD Diet ‘guru’ Pierre Dukan struck off. 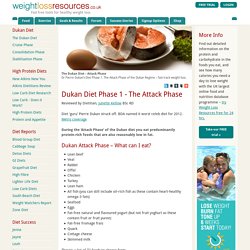 BDA named it worst celeb diet for 2012. Metro coverage During the ‘Attack Phase’ of the Dukan diet you eat predominantly protein-rich foods that are also reasonably low in fat. Dukan Attack Phase – What can I eat? Lean beef Veal Rabbit Offal Chicken Turkey Lean ham All fish (you can still include oil-rich fish as these contain heart-healthy omega-3 fats) Seafood Eggs Fat-free natural and flavoured yogurt (but not fruit yoghurt as these contain fruit or fruit puree) Fat-free fromage frais Quark Cottage cheese Skimmed milk There’s a list of 72 foods to choose from. During the Dukan Attack Phase foods should be cooked without any added fat so grilling or roasting is best. In addition, you can use spices, lemon zest, soy sauce, herbs, garlic, vinegar, onions, shallots, gherkins and mustard to add flavour. 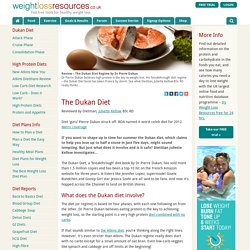 BDA named it worst celeb diet for 2012. Metro coverage If you want to shape up in time for summer the Dukan diet, which claims to help you lose up to half a stone in just five days, might sound tempting. But just what does it involve and is it safe? The Dukan Diet, a ‘breakthrough’ diet book by Dr Pierre Dukan, has sold more than 1.5 million copies and has been a top 10 hit on the French Amazon website for three years. What does the Dukan diet involve? The diet (or regime) is based on four phases, with each one following on from the other. If that sounds similar to the Atkins diet, you’re thinking along the right lines. Unlike Atkins, it seriously restricts fat so fried eggs, steaks and chops are not allowed.